I finally worked up the gumption to begin cutting out the rusty structural members of Ol' Rusty. You saw the steps I took to prepare the car to be cut up when I made door braces, the next thing to do is to put the car up as has as I could on jack stands. Now, some guys put the car on a rotisserie which is the way to go if you have the room (and funds). I don't have the either so I'm stuck with jack stands. I set them as high as they would go and positioned them directly beneath the (undamaged) frame members. Later, I'll move them under the front clip and trunk area frame members and the rockers when I go to install the floor. Note: The jack stand under the rear differential is only supporting the rear differential to take some weight off the back of the car. If you are attempting to level a car, the suspension is a poor choice to use for support. 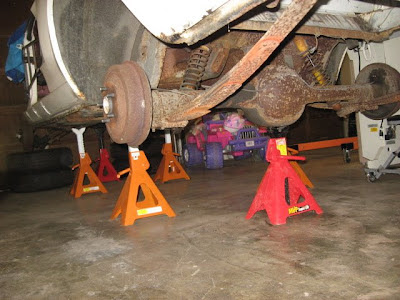 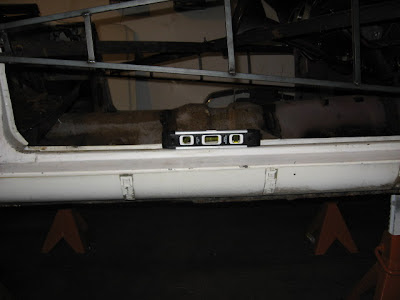 Having stalled the inevitable as long as I could, it came time to perform the first surgery. The removal of the passenger (RH) torque box. Remember this picture? This is what it USED to look like. The bottom was rusted out of existance. 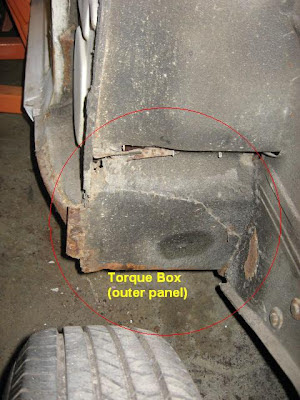 About an hour later with the help of my 3.5" air cutter, my 4.5" dewalt angle grinder, and my air chisel, I had the absolutely worthless torque box removed leaving a gaping hole behind the front wheel. I think I'll leave it this way to help keep the car cool on those hot August nights. Well, for as useful as the old torque box was, I might as well. Note the missing inner rocker (hint: there's supposed to be a "C" -shaped member running along the inside of that big flat plate you see at the middle left side of the picture. It was missing when I started... in fact, a lot of the car was missing such as the floor pan and firewall toe boards. Can you see that god-awful "patch" at the bottom of the frame rail? I need to cut that out and replace it. Other than that, the frame rails appear to have plenty of meat left to them. 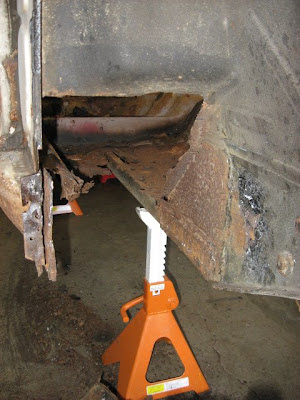 And this is the old torque box... or what's left of it. Actually, it stopped being a torque box the day the prior restorer "restored" this car around 1984. You can't tell from this picture but there's a sheet of 22 gauge sheet metal tack welded in place of a cut-away original 12 gauge that took over as the bottom of the torque box. If you aren't aware, 22 gauge is about half the thickness of 12 gauge sheet metal. This member was no longer structural after 1984. Ah well, the bright side is that I really can't do much worse of a job restoring this car than the prior guy did. 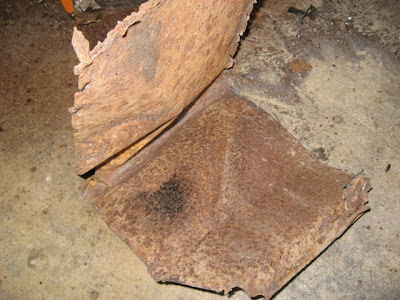