Friday I removed the front half of the inner rocker reinforcement plate so this shot is a view of the inside of the passenger side outer rocker panel toward the front. Most of the rust you see in this picture is surface rust with the exception of the very front where you can see a cancer hole at the bottom. I'm going to patch that and clean up the rest with a grinder. Toward the bottom right of the picture you can see the top side of the right hand lower reinforcement box. I left the section of the inner rocker reinforcement plate attached to that box to continue to support the frame rail of the car where my jack stand is located. Were I to cut the lower reinforcement away from the remainder of the inner rocker, I doubt the frame rail could support the weight of the car and things would bend out of alignment. I'm going to need to relocate the front jack stand eventually though. 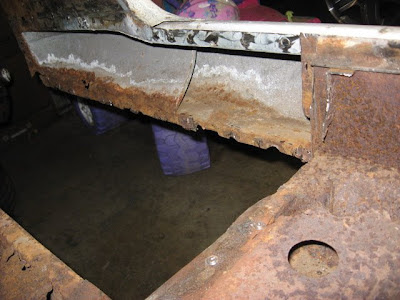 Tonight I started to cut away everything I could that was in the way of removing the remainder of the inner rocker at the back of the car. The brace laying at the bottom of the picture was welded to the box structure you see to the upper left side of the picture just behind the rear of the door opening. The brace is also laying on top of the rear torque box cover which I also need to cut away from the inner rocker. 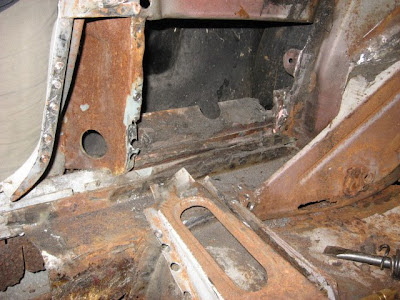 Additionally, I need to remove this long angular brace. I'm unsure how I'll do that though as it goes through the rear seat trunk panel. I've already cut the welds along the inner wheel well and I'll probably just cut it in half just shy of the rear seat transition (the hump). There's a little rust spot at the lower left edge of this brace that I need to patch plus it's in the way of the installation of the floor so it's gotta come out. 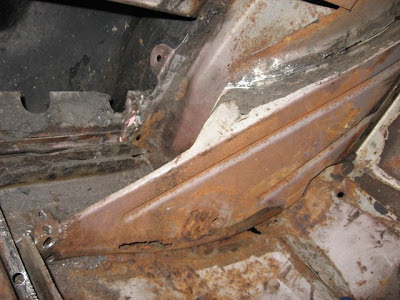