With the completion of the repairs to the forward area of the car, it is now time to work on the real problem areas. Namely, the structural members such as the torque boxes, inner rockers, and floor pans. The problem is that since these are structural members, the car will be weakened by their removal and the car would be at risk of bending at the bottoms of the door openings essentially folding up on itself. Needless to say, this would be bad.

An extreme solution would be to put the car on a frame jig, an assembly of dimensional steel that takes over the total support of the car. Since I intend to take a more surgical approach by repairing one side at a time and not removing large sections of the floor immediately, I'm going to attempt to get by with a set of door braces to prevent fold-up, and cross members to prevent twist.

I had done some prior research into the construction of door braces. Initially, I was going to purchase some rather nice looking universal door braces from Accessible Systems. However, $300 plus around $75 for shipping seemed like a waste of funds to me. I could get a set of used disc brakes for the front for that much or a power steering unit or a multitude of after-market parts so I opted to attempt to design my own based on those from Accessible Systems and from Kevin's Rod Shop.

$71 later, I had procured 3 8 foot sections of 1/2" solid square bar steel and a couple of 2 foot sections of 1/8 flat steel from my local hardware store and set to cutting and welding them into something that loosely resembles a set of door braces. I cut 6 3.5" x 3" chunks of flat 1/8" stock and drilled holes to match the door hinge bolt locations and door striker bolt locations. From there, I tacked 2 4' lengths of square bar between the 2 hinge plates and the door striker plate on each side. I tacked 3 shorter sections of square bar to tie the long bars together. 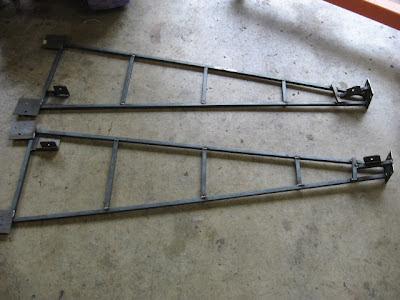 I "felt" that I needed to reinforce the door striker side of the braces with a kind of a tri-pod configuration. Finally, I welded in some flat 1/8" brackets at each end of each brace with 5/16" holes drilled in them to mount the cross members to in order to prevent the body from twisting while I'm working on the car. 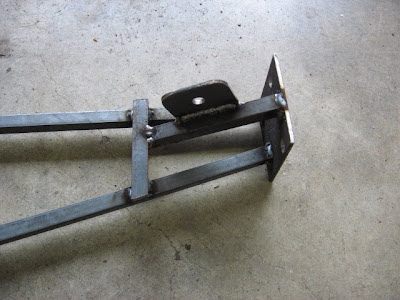 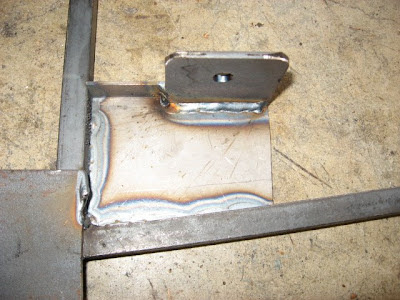 I found a couple of lengths of bed frame I had laying around in my back yard and cut them and drilled them to mount to the brackets I had previously welded to the door braces. I chose to bolt these sections on to make removal of the braces easier and to allow me to use a "brace to tunnel" support system in the event that I decide to replace the floors on each side rather than the entire floor which I'm still undecided. 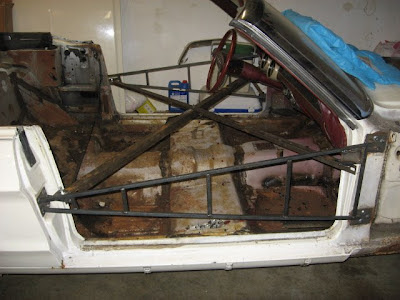 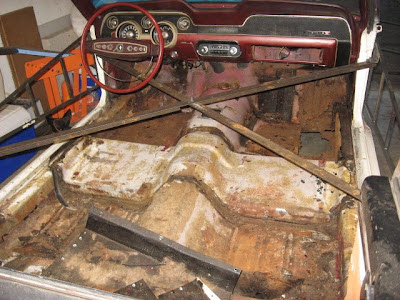 So now I'm ready to raise the car up onto jack stands for disassembly and repair of the floors!
Posted by A. Olshove at 8:18 PM