Today was a rare sunny day for this June so far. I spent most of the day with my daughter and generally enjoying the sunshine but did a little work in the early evening.

I decided to see what was behind the passenger side inner rocker where I'd previously removed the torque box. I soon discovered that the previous owner's restorer took some more shortcuts when "restoring" (and I use that term lightly) this car. It appears that the inner rockers had rusted out quite some time ago, prior to the 80's which is when this car was allegedly last restored.

Rather than cut out the old metal and replace it, the culprit (I'm not going to call him a "restorer" anymore) inserted another plate up under the existing (already rusted out) inner rocker and welded it to the inside of the old inner rocker which indicates to me that the bottom portion was already gone otherwise they wouldn't have been able to weld where they welded. So now I have to cut out the inner rocker with their inserted patch plate AND the original inner rocker plate. Just as a note, the "plate" I'm talking about is a long piece of heavy, flat sheet metal welded between the inner and outer rocker panels. In the picture below you can see the original plate (with the spot weld nibs on the outside) and the end of the "new" plate which I'd already cut away. 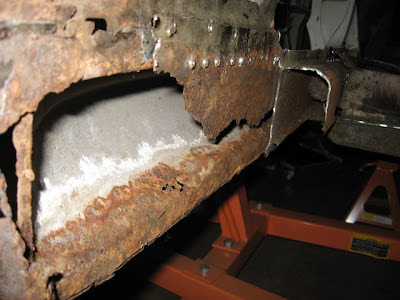 This is just a view from the inside of the car showing the newly removed rust/metal. Looks like this task of removing the entire inner rocker assembly and the junk inserted by the culprit is going to take me more time than I'd thought. 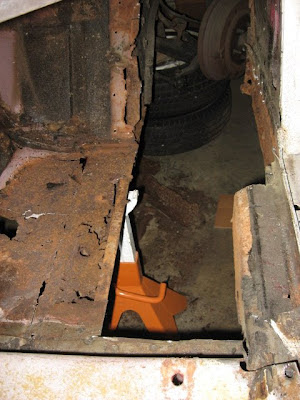