Also with the sheet metal parts, I received a heavy-duty Blair spot weld cutter. It works like the economy spot weld cutters but has a much more aggressive, and stronger, cutting blade and chews through the spot welds with a lot less effort.

This new cutter gave me the motivation to start tearing through the welds that attach the inner rocker to the outer rocker and I made some progress in just a few hours. I left the lower seat reinforcement in place so I could use it to fit the new rear floor support rail and the front floor support patch. 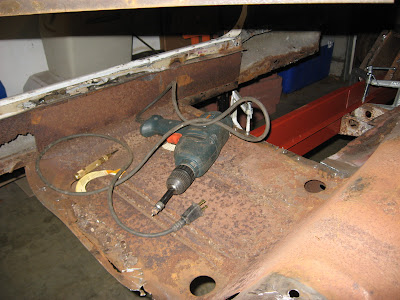 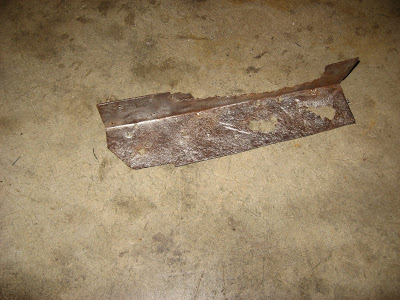 I have recently purchased some disc brake assemblys scavanged from a 1971 Ford Ranchero and thus needed to get a sand blasting cabinet to clean them and the various other rusty parts from this Mustang. The above hunk of rusty metal was the initiation test for the new blasting cabinet. Using the medium sized nozzle for the included blasting gun, the load didn't seem to tax my smallish air compressor too much. I could blast for about 30 seconds continuously before the compressor would need to restart and then continue for quite a while longer while it ran. I think it'll work fine although it may work better with a so-called pressure pot blaster. I think for the above test, I should have used an aluminum oxide media rather than glass beads as the glass beads did take off some rust but really just shined up the part. 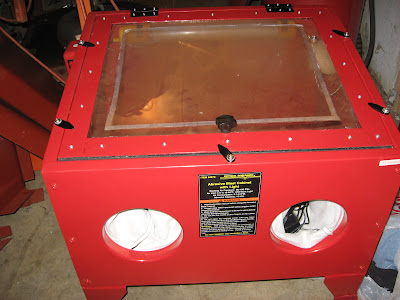 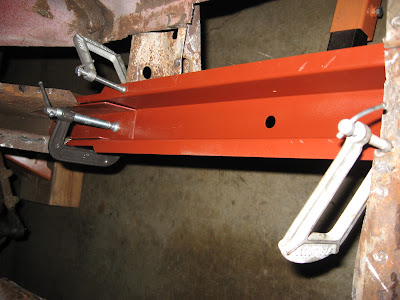