Mission complete on the passenger side of the car so it's time to start on the drivers side. I began by re-leveling the car and repositioning the front jack stands. Having accomplished that, I moved onto the driver side torque box.

See? Doesn't look to be in that bad of a condition other than a hole in the bottom right? Well, the proof of the pudding is under the crust so to speak so I scraped away the undercoating and found a layer of... Bondo? 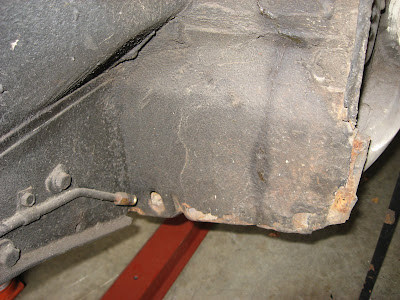 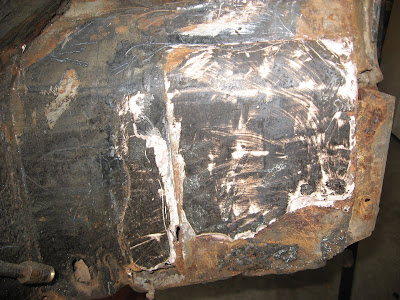 WRONG! Last time I checked, Bondo is not a structural material. It's for hiding things. Hiding things from people who pay you good money to "restore" their car. So A) The sheet metal was way too thin for the job, 20 gauge as opposed to 14 gauge. B) The sheet metal was riveted to the structural steel instead of welded or, hell, even brazed. C) The rust was not repaired and continued to destroy what was left of the torque box, frame rail, floor support, and inner rocker. D) The whole mess was covered up by a layer of Bondo and forgotten. The whole thing stinks of fraud to me and I feel sorry for the previous owner who likely paid some loser to screw him over. 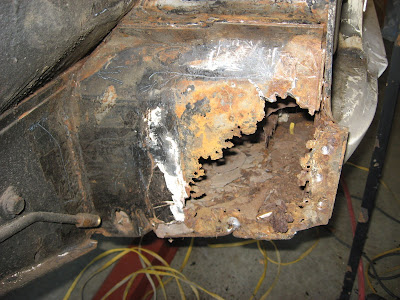 I cut off the front of the torque box and discovered where all of the rust from the other structural members has been collecting for all of these years. "Hey honey, do you hear a rattling noise? Like a maraca?". 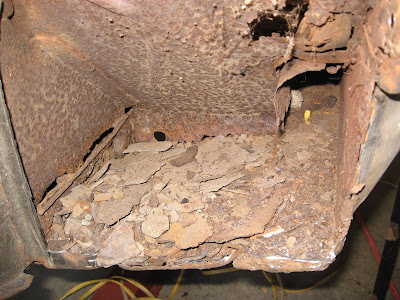 I spent another couple hours cutting and removing everything. The floor support and the bottom of the front frame rail were toast so I cut them out to the lower seat reinforcement along with the box portion of the inner rocker and a hunk of floor pan. You can see the bottom of the frame rail laying on the floor there with the old floor support cradling it... rustily. At this point I had been manhandling various cutting implements for a good solid 4 hours and my wimpy computer programmer arms were getting tired so I knocked off for the day and took a shower. 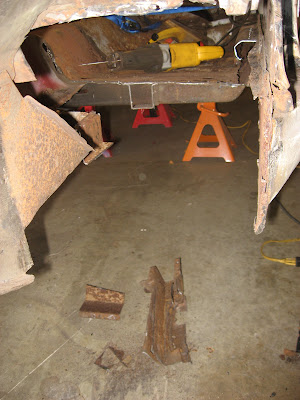