How To Ditch the Dash

In keeping with my bass-ackward methodology of patching the rust before stripping the car, it came time to disassemble the dash so it can be stripped and repainted. This involves removing the dash pad, the dash gauges, the trim, wiring, etc.

This is what the dash looked like but this picture was taken a few months ago right after I installed the floor. 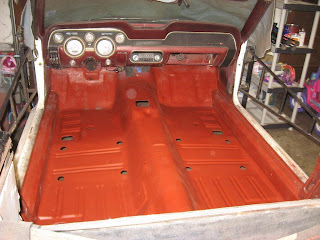 The back edge of the dash pad is held in place by a metal strip screwed into the base sheet metal through the edge of the pad. 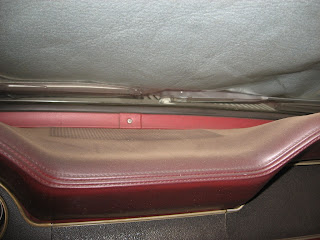 After the strip is removed, there are still a few screws underneath that needed to be removed. A couple of these were obviously screwed in before the windshield was installed so I had to remove them with pliers from below. It would just be easier to remove the windshield before removing the dash pad I think. 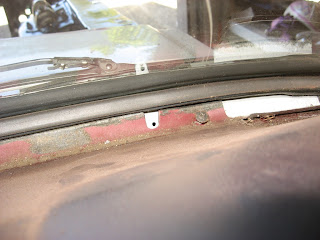 Before the pad could come off, the trim has to be removed since the pad is tucked under the trim in places. Before the trim can come off, the gauge cluster has to come off. Before that, I removed the air vent control panel. Two screws on top and two on the bottom and unit slides out where you can disconnect a switch wire. I already had the cables disconnected from their respective vents so I just had to fish them out and the panel could be removed. 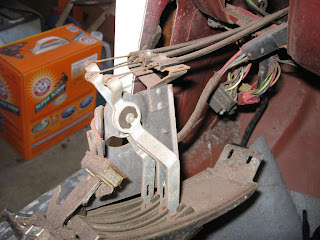 Next, there are 3 screws at the top of the gauge cluster and a screw under each of the large round gauge bezels. The speedometer cable would normally have to come off but that was removed months ago so all that's left are 3 wiring connectors which easily unsnap and the cluster is out. 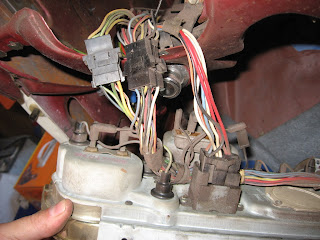 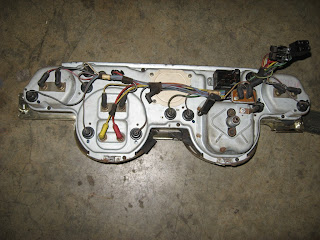 The dash trim is removed next. The small segment to the right of the cluster just pops out but the larger trim is affixed to the dash with many large plastic posts each with a speed nut screwed onto it. 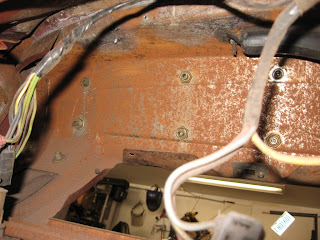 When the speed nuts are removed, the trim comes off. Here's what it looks like from the back with the many plastic posts. 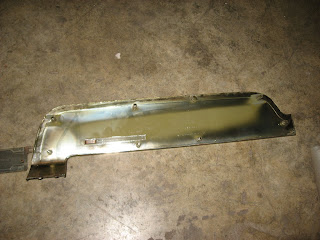 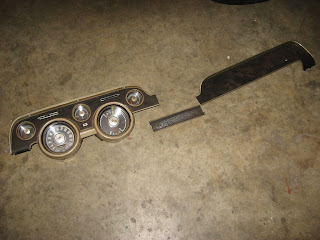 Next is the radio. It's removed by disconnecting the power cable and speaker connector, then 4 philips screws in the top and bottom of the bezel and the radio pops out. 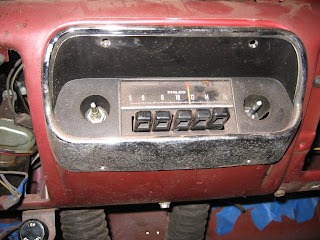 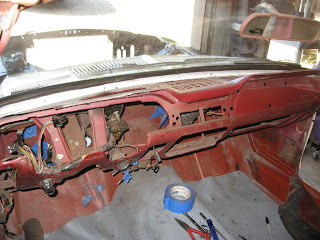 There are two speed nuts holding the speaker up into the dash via studs. The studs are snapped into place in the dash top and held in place with spring tabs. 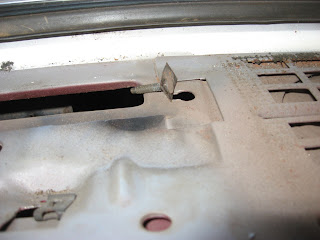 The courtesy lights are easy to remove with one screw and one wire each side. 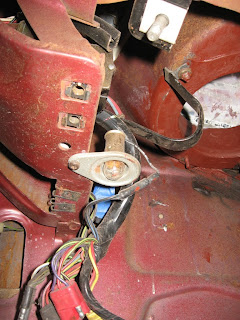 Now, this light switch. It was something else. I scratched my head for awhile on this one. I checked through my factory service manual and it didn't mention how to remove the damned thing. After quite some time fiddling with it rotating the collar that said "Lights" about a hundred times trying to unscrew it, I happened upon a secret button. A secret that I will share with you here today.... for 1 meeeeellion dollars! 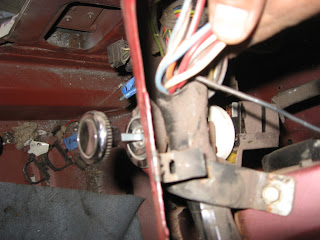 Nooooo, just kidding... unless you have an extra $1M laying around... that you don't need... that you'd like to send me...? Oh fine, the secret button is on the back of the unit. You see it in this picture? The little metal nubbin just to the left of the 3 indentions and just to the right of the tall ridge. Push that button and pull the light switch knob straight out of the unit! 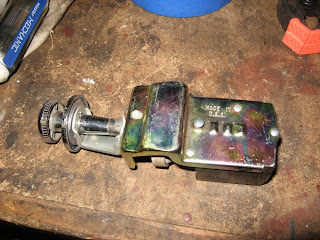 And then you can use a philips screwdriver inserted into the end of the switch, into that cross, to unscrew it from the switch body and it will slide backwards out of the light switch hole in the chassis. 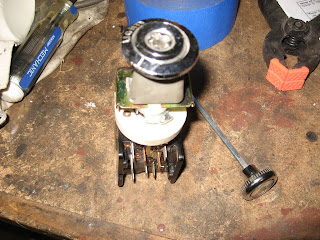 The ignition switch was much simpler. Unscrew that flange with the 3 notches in it and the switch will come out of the hole. 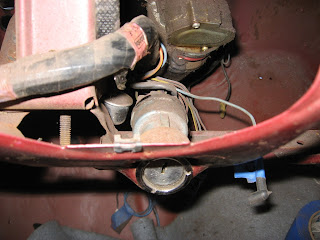 The removal of the wiring harness is actually straight forward. The harness has some plastic clip fasteners taped to it that insert into a few holes up under the dash. There are also a couple of strap type fasteners, a ground lead on the side of the instrument bezel, and the whole harness just snakes out through the gauge bezel opening. I took pictures of all of the fastener points before removing it though in addition to marking the less obvious connectors like the top, lighter, courtesy lights, etc. All ofthe wires had previously been removed from the firewall and the engine compartment harness had been removed first, of course. 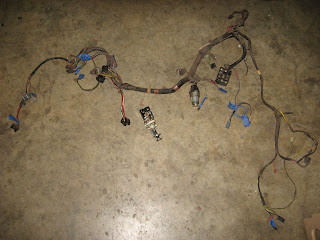 An interesting side story: Just prior to posting this blog entry, I went out to snap the above picture and noticed that there was a piece of paper wrapped around the wiring harness and taped with electrical tape. At first I thought it was some kind of wiring inspection/testing document but as I inspected it closer I realized.... 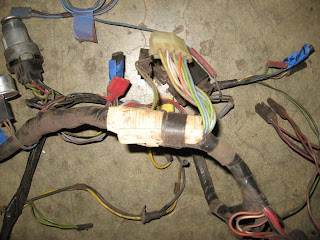 ...That it was the BUILD SHEET! I thought this thing was long gone with the prior restoration of the car. They're usually found under the carpet or behind a door panel or such. This is a really awesome find as it adds to the cars documentation. I am SO lucky that I didn't burn this up grinding or welding on the floor. This is another reason to disassemble a car completely before starting a restoration. 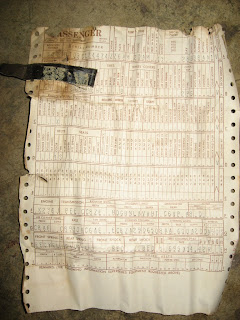 Aaaanyway, back to the destruction of the dash. After the wiring was pulled, I could get up under the dash to remove the vent ducts. Each is held on by two studs with speed nuts like the radio speaker. Finally, I could get to the screws of the wiper motor assembly. Removing the motor itself isn't really that tough, just 4 screws on it's mounting bracket. 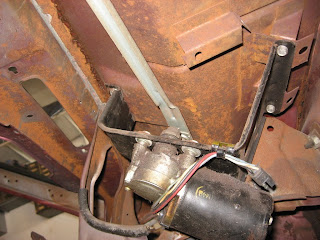 The interesting part is how to get the wiper drive arms off of the motor spindle. Well, there's this funky clip at the top. Pop the clip forward and it comes up off the spindle shaft. 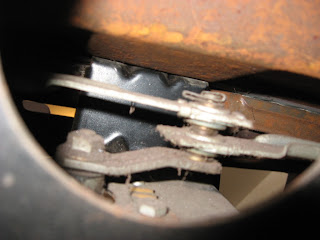 The arms can then then be lifted off the shaft and the motor bracket can be removed. 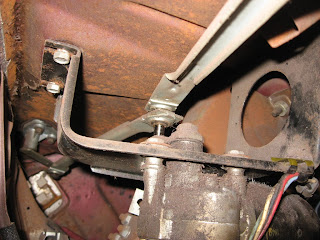 When all is said and done, this is what the naked dash looks like. 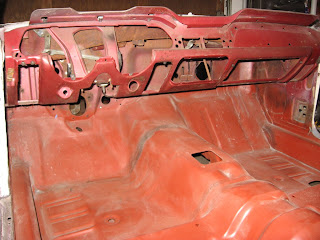 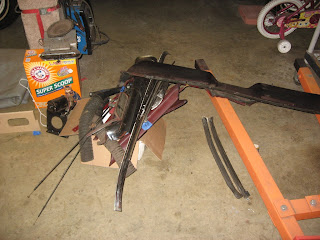