I finally have all of the parts I need to complete the front disk brakes that I started to restore last month. I have the new rotors: 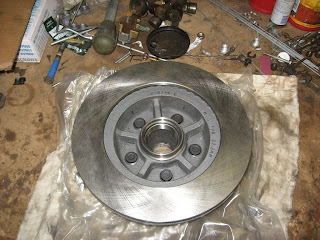 The bearings and seals for the rotors, plus some good old fashioned bearing grease: 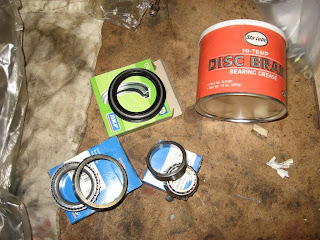 And the spindles, caliper bracket, and dust shield installed on the car: 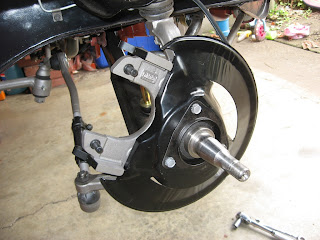 The next step had me intimidated for a little while. Packing the wheel bearings and installing them in the rotors seems like a big task but after researching it, it's really not that difficult to do. There are several sites on the net that have detailed instructions on how to pack wheel bearings and install disc rotors. Mustangs Plus has a write up and there's a good video on how to pack wheel bearings on YouTube. The basic concept is simple though. Jam as much grease as you can between the bearing roller cage and the inner race. These rotors came with the outer races already pressed in so I didn't need to use the races that came with the bearings (the rings in the picture above). I also spread grease in around the inside walls of the rotor between the front and rear bearing races and then set the packed bearing against the outer race in the rotor. 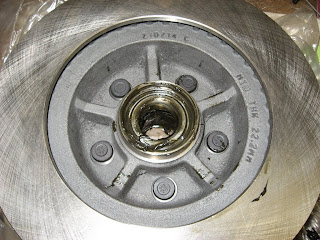 I then pressed the spindle seal into place and cleaned up the excess grease. 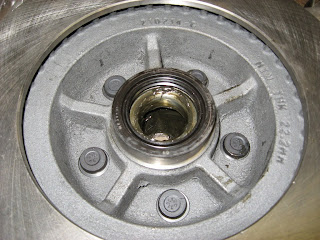 The rotor was placed over the spindle and the outer bearing was packed and slid into place over the end of the spindle shaft. 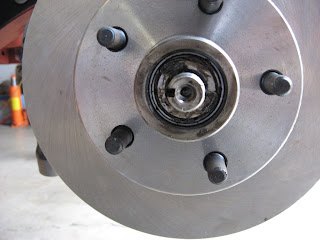 The large keyed washer is then placed over the bearing and the 1 1/8" spindle shaft nut is tightened against it. There's a procedure for tightening the nut that is described in the Ford Factory Service Manual as follows: Rotate rotor while torquing to 17-25 ft-lbs. Back off the adjusting nut 1/2 turn and retighten to 10-15 inch pounds while rotating wheel.

You then place the nut retainer in a position to allow the insertion of a cotter pin. You shouldn't have to move the nut to do this. I was able to find a suitable position by rotating the retainer step by step until the cotter pin could be inserted. The cotter pin has to be bent around the shaft rather than back against the end of the shaft. Otherwise, it will rub against the inside of the grease cap. 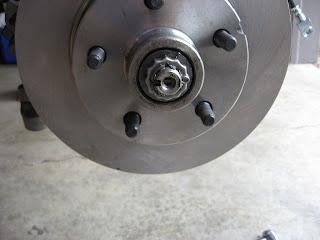 Here's the fully installed rotor. It's this point where I applied brake cleaner to both sides of the disk. You can access the back side of the disk at the caliper opening in the dust shield before the caliper is installed. 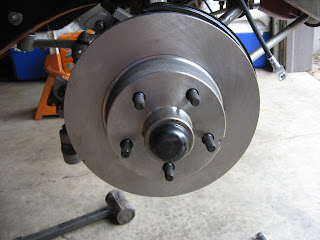 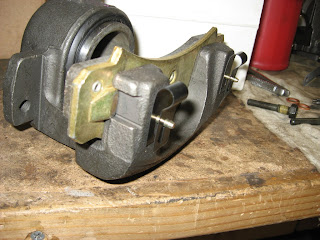 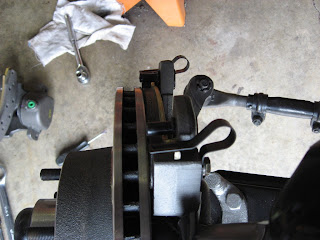 Next, I installed the caliper on the caliper bracket. It's kind of an unnatural feeling task because the calipers don't actually bolt to the bracket. Rather, heavy threaded pins are inserted into rubber sleeves in the bracket and tightened against the caliper. The whole caliper assembly floats on two pins! Before you tighten the pins down though, make sure the bleeder valve is pointing back. If the valves aren't pointing back, the calipers will not bleed correctly. Each caliper only fits on one side of the car. 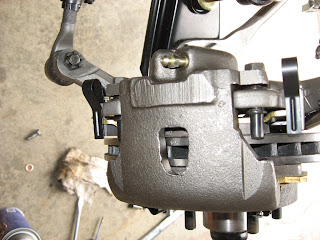 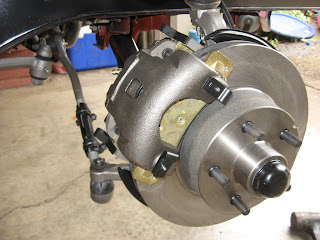 The end of the brake hose could then be attached to the caliper via a "banjo bolt" with crush washers on each side. I didn't torque them down yet though since the suspension is hanging so low due to the installation of the springs/shocks. Actually, the tube isn't stretched as badly as this picture makes it look but I'm going to wait until I set the car down to tighten up the banjo bolts. 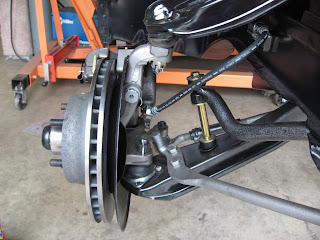 OMG! I think I have a rolling chassis here!! 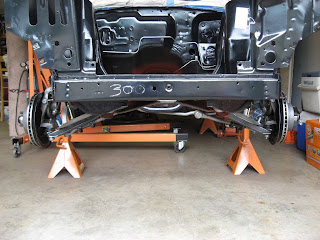 Update: I put on the original standard front wheels to ensure that they had enough clearance for the new disc calipers and they went on with no problem. 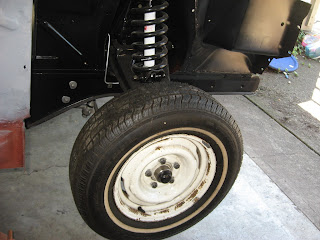 Here's a shot of the back space. It's close, but it doesn't rub. 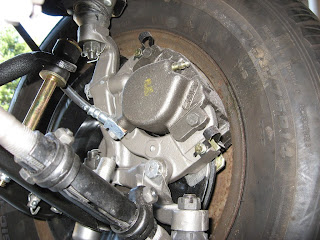