In the right proportion

Okay, so I've refurbished the front disc brakes from a 71 Ranchero, installed disc brake hoses for a 68 Mustang, drum hard lines for a 68 Mustang, cut and then rerouted the apron hard lines to fit the hoses. Can I use the brakes now? Nope! For one thing, I haven't purchased or installed the 74 Maverick master cylinder (M/C) I intend to use. I'm using that particular M/C on recommendation of the guys on the VMF and for good reason. Firstly, it's compatible with the 68 M/C hard lines and, secondly it supports front discs and rear drums since it has a larger fluid chamber for the front because disc calipers use more fluid, third, it's compatible with the existing 68 manual brake pedal and push rod, and 4th, the Maverick M/C is a 15/16" bore that's voted most likely to succeed in this setup.

So, if I were to install the new M/C could I THEN fill up the brake system and use the brakes? Nope! This brake conversion is missing one more key element. If I were to fill the system and slam on the brakes, the chances are very good that the rear drum brakes would lock up hard and poor Ol' Rusty would swap ends. So how do we prevent this immanent catastrophe? The answer is a Proportioning Valve. The "prop" valve allows less fluid pressure to the rear drum brake cylinder so that the rear drums can engage at the same rate but in different proportions than the front disc brakes.

In the original 68 disc/drum cars, the prop valve and distribution block are installed as one assembly that looks like this: 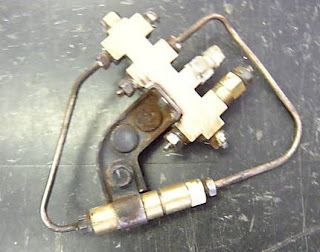 The cylinder toward the bottom of the above picture is the prop valve. A concourse correct disc brake car must have a proportioning valve/distribution block assembly like that one. The problem for me is that my budget is alarmingly low and an assembly like that costs over $100, usually $125+, in unknown condition. It's not guaranteed to even work for that price so you're possibly in for another $50 for a rebuild kit available on eBay.

I'd really like to have had the correct dist block/prop valve on my car but that's not going to happen. Fortunately, there's an alternative made available by several different manufacturers in different makes of stand-alone prop valve. I bought this Wilwood type from Mustangs Plus for $41 + shipping and it's adjustable so it can be tweaked to exactly the right amount of fluid pressure.

It comes with two nipples that convert it's 1/8 NPT threads to 3/16" double flare brake threads so those get threaded into the housing first and then it's time to figure out how to install the thing in the rear brake line between the distribution block and the rear brake tube. 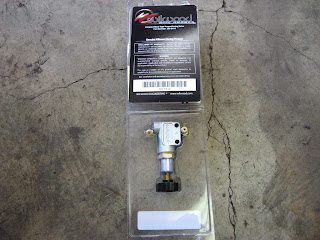 I opted to hang it from the original drum/drum dist block with a bracket made from 24 gauge sheet metal. First I had to make a short line to go from the dist block to the prop valve. Fortunately, I had purchased a double flare kit, cutter and bender to modify the hard lines on the outsides of the front aprons and had done several practice flares on scrap 3/16" brake line until I could make a decent double flare. The shortest line you can make and still get the threaded fittings on and get the line into the flaring tool is 2" so I made a 2" segment of brake line and bent it slightly to hold the prop valve out away from the dist block to clear the front brake lines and still be adjustable from under the M/C and dist block. I test fitted the new hard line on the apron-mounted dist block with all the hard lines hooked up and examined reference pictures to ensure that the prop valve wouldn't be in the way of the steering column, the e-brake cable exiting the firewall, nor the wiring harness on the driver side of the car. I then cut a heavy card stock template to represent the bracket: 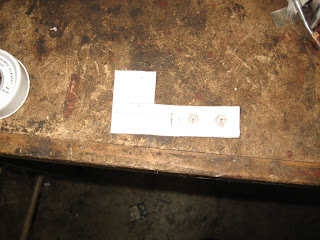 ...And then cut, drilled, and bent the sheet metal as specified by the template. Here you can see the finished bracket and prop valve with 2" brake line fitting on the "IN" port. 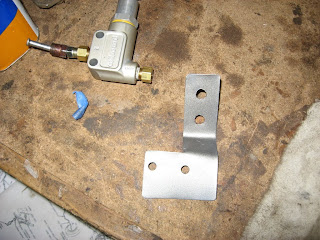 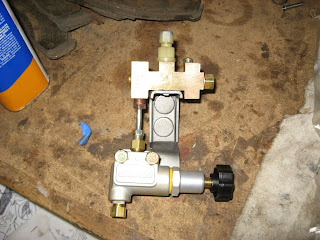 From the back. I felt it was important to tighten the 2" fitting completely before tightening the bracket nuts to ensure that the bracket doesn't prevent the line from sealing. 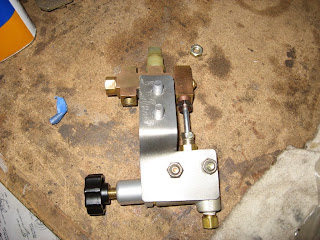 The assembly was then installed on the original apron mounting point and the hard lines were attached. The rear brake line had to be modified to exit from the "OUT" port of the prop valve. This involved cutting the line at the port, moving the threaded fitting onto the newly cut tube, and double flaring the new end. Here's the plumbing awaiting a new master cylinder. 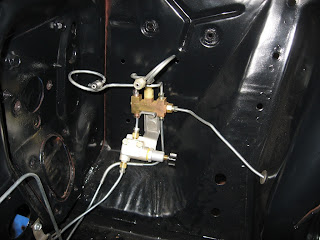