Take Your Top Off!!!

Okay so let me explain my bizarre methodology here. You'll note that to this point, I haven't had the car media blasted whereas your average veteran restorer would have fully disassembled the car and media blasted the shell first. But noooooo, I had to be different. My original plan a year ago was to fix the rust, reassemble the car, and paint/restore the aesthetic stuff over the years. After I replaced the floor late last Winter, my mindset changed to partial restoration where I'd swap out everything on the undercarriage where the car took the most salt damage, refurbish the engine, install the interior and drive train and drive it during this Summer. Then I was going to remove the exterior trim and strip and paint the car during the Winter. This was the primary reason I had taken the time to paint the engine comparment, so I wouldn't have to remove the drive train to paint the car later. As you've probably guessed, this plan wasn't well thought-out and ultimately failed. So, it's like putting the cart before the horse, but I'm NOW going to have the car media blasted. The good news is that I don't have to pay for time to blast the undercarriage, floor, or engine compartment. The bad news is that there's a risk of damaging the work I've already done but let's be honest, it's not impossible to respray the engine comparment if I had to or touch up the red primer or undercoating on the wheel wells/bottom/floor. It would just be inconvenient.

The first steps I've taken toward this new goal is to manually strip the rockers, cowl side panels, and the hinge panels. I did this to get a feel for how long it takes to manually strip a panel. It took me about an hour per side followed up by a coat of self-etching primer on the passenger side: 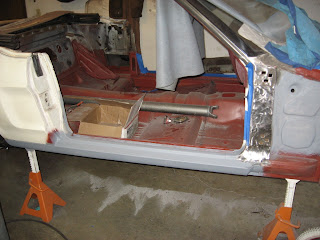 I did the same for the driver side but rather than primer, I spread on some Ospho. The Ospho really showed the small areas of primer that I'd missed, another point for media blasting. BTW, I used an angle grinder with a 24 grit flap disk. I had a router speed controller that I used to reduce the speed of the angle grinder to avoid gouging or heating the metal and it seemed to also reduce the dust somewhat. Another reason I did the rockers and cowl side panels was so that the media blaster would have one less access point to damage the freshly painted front aprons or overspray the bottom with primer or media. 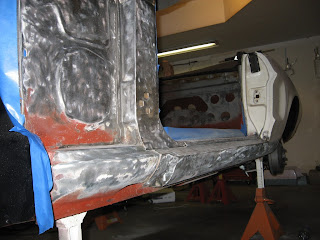 The first step in preparing the exterior rear for blasting was to remove the trunk lid. I also removed the seal and hing captive nuts. I'm going to let the media blaster take a stab at it. 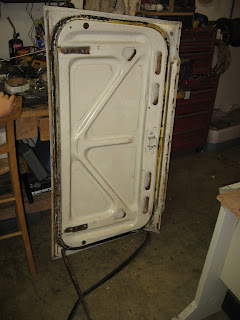 The trunk lock had to be removed. You pretty much just pull out that flat spring thingy and the mechanism pops out. 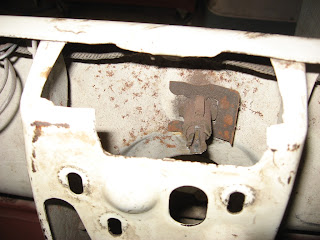 And then the wiring should go so the media blaster can do the inside of the trunk. 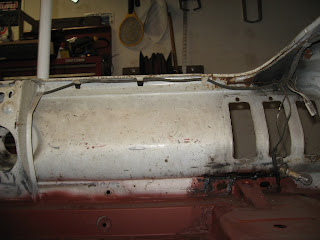 And finally, the rear quarter extensions. They're just held on by 4 easily accessible studs and a philips screw. 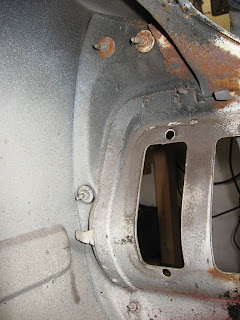 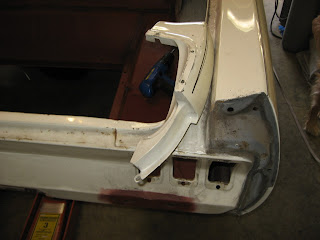 Queue the pole dancing music. Time to take the top off! Believe it or not, it's not as sexy or exciting as I've made it sound. It's more dirty, kind of smelly, and rather unkempt.

I had originally attempted to take off the rear top boot trim with the top still on and found that a couple of the nuts holding the trim in place were inaccessible. So, to get to the nuts, I had to first remove the top well liner, just a bunch of little philips screws, and then remove the rear tack strip. Once that was removed, well, the top is pretty much off. Here's what the tack strip looks like on the passenger side. 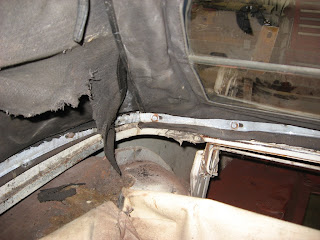 And the driver side. Just remove the screws and... 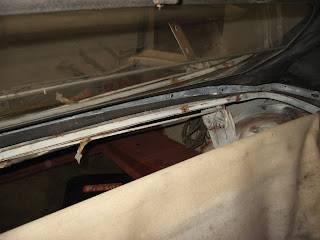 ...Off comes the rear curtain (after unzipping it). 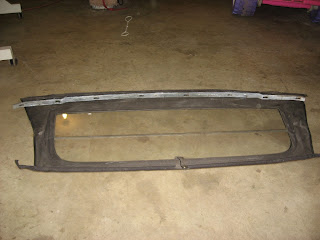 Here are all of the holes that hold the boot trim onto the back of the top well. It's not an easy job to remove this trim with the tack strip in place. 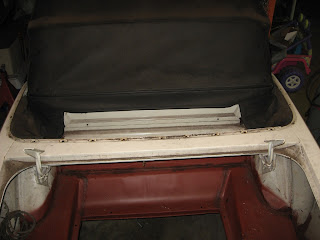 Here's the boot trim upside down for examination of the studs. Look at them all! 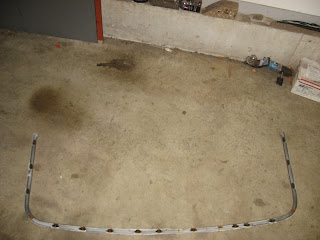 The next step to pulling the top off the car is to remove 3 bolts on each side. The remnants of the top well liner is laying to the side. 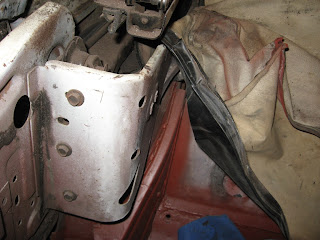 The top then just lifts off. Here's the old top with the side tack strips still attached laying on the floor. 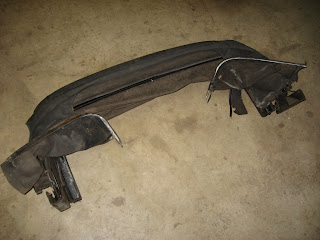 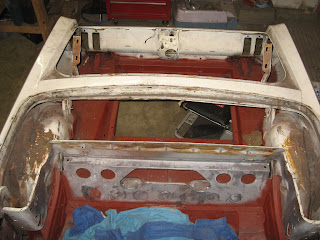 BTW, these smashed wheel houses lead to some confusion among new restorers. A lot of guys ask, "Is this supposed to be this way!?" The answer, yes. The tops of the wheel houses are smashed on convertibles to allow for clearance for the top to go down into the well. The problem is that nobody sells the flat-top wheel houses so you have to smash them yourself or cut them and weld in a flat plate. 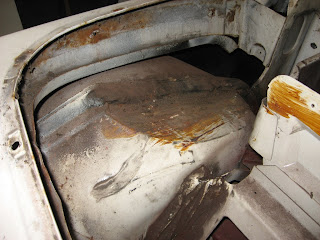