Too cheap to buy new parts?

So after having spent over a hundred hours preparing and repairing the shell, I dug around in my shed and discovered that nearly every part that was in contact with the elements was rusty, greasy, or the paint was chipped. I then realized why the general consensus on the VMF indicated that restoring a car was a rather expensive proposition. I started out with the cavalier frame of mind that I would just fix the rusty shell and then put the car back together and drive it because I'm not interested in a show car. Well, one look at the box of parts told me that I was delusional. There's no way I was going to stick this rusty box of crap on my clean shell. The problem is that, as I've stated before, I'm rather chea.... errr... thrifty. One approach that, say, a show car guy would likely take is to buy all new or NOS parts. After all, parts aren't all that expensive right? $20 here... $50 there... pretty soon you're into the hundreds and then thousands of "Just one more little part" and this (plus paint) is how a restoration can cost 10's of thousands of dollars (no exageration here).

Well, I'm taking a more conservative approach. I will buy new parts where safety is a factor or the part is beyond saving but generally, I've resolved to spend time instead of cash and restore the parts I could.

Take this passenger side motor mount for instance, ugly, rusty, probably would drop the engine right on the ground right? Why not just buy a new one? Upon closer examination, this mount is not bad. Lightly pitted pehaps but fully functional and structurally sound. A new pair could cost around $140 and I've heard stories of repro mounts not quite fitting right. I felt that if I failed at restoring the mount, or found something hazardous, I still have the option of buying new ones. But I was willing to put up a fight first. 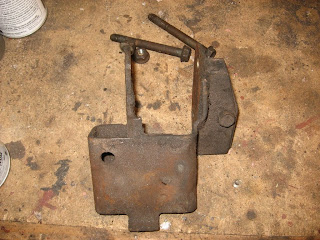 My general method is this. I installed a Harbor Freight 6" Wire Wheel on my bench grinder and use it to take off grease, rust flakes, old paint, etc first. Then I hook up my blast cabinet, set the air to 90 psi, and toss the part in and work it over with nickle slag based media. 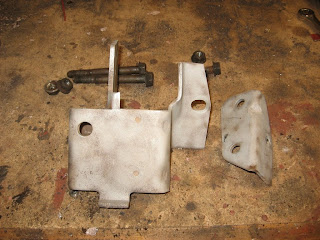 I then clean the part with lacquer thinner and hit it with two coats of self-etching primer. I'll usually perform the same routine on the fasteners but these hardened bolts cleaned up nicely just with the wire brush. 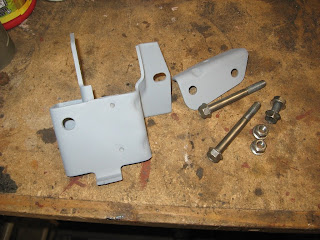 Finally, two coats of Dupli-Color semi-black engine enamel. The Dupli-Color is just something I had on hand for an engine compartment paint test. Not used for any concourse correctness reason. Here's the finished result. Not too shabby and will last for several more decades. 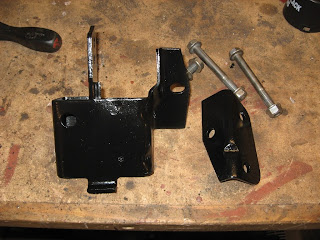 I performed the same routine on the rest of the parts. The only difference is the color of paint I chose to use to protect against corrosion. These are the rear tow hooks that bolt to the frame rail. The one on the left is untreated, the one the right has been blasted, cleaned, primed, and painted with Rustoleum Professional Stainless Steel paint for a natural metal look. Same treatment for the fasteners. 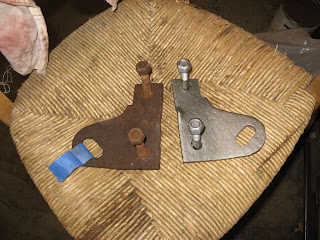 Aluminum isn't safe from my blast cabinet either. I used the same media as the steel but turned the air pressure down to 40 psi. The horn on the left is blasted, the right is untreated. 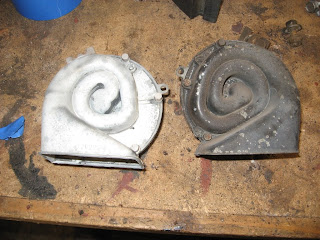 Next, lacquer thinner, etching primer, and semi-gloss DupliColor and viola! Oh yeah, and I did the stainless steel paint on the bracket and mounting screw although I realized later that the paint would inhibit the ground contact to the core support so I'll need to do something about that before the horns are tootable. 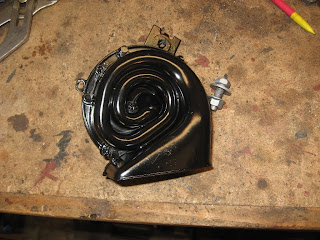 This is one of those situations where I opted to buy a new part rather than refurbish the old. The reason is that big old crack across the center hole of the rear spring shock plate on the left in addition to the fact that it's slightly warped. The new reproduction plate is on the right. Pretty good reproduction. 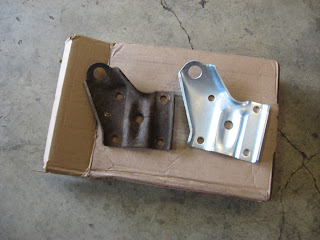 Both rear spring shock plates were damaged in the same way so I bought new ones for both sides. Even though these are new parts, I can't just go stampeding off to install them just yet. They will rust away just like the originals in a few years if I don't do something first to protect them. So, these got wiped down with lacquer thinner and then received the etching primer and stainless steel paint treatment. 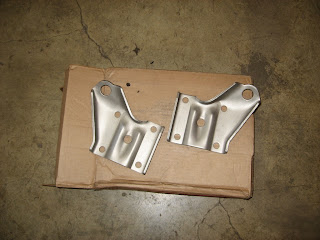 The new floor reinforcement plate needed the same protection as the new shock plates. To the right is the original rear torque box fuel line clamp after it has been blasted. 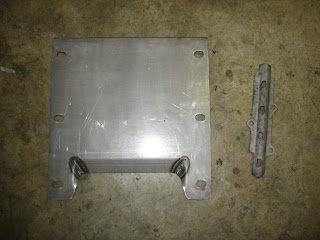 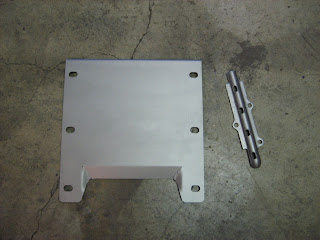 This shot is the only "before" picture I have of the engine compartment cross member. 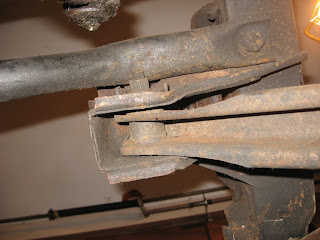 This part didn't fit into my blast cabinet so I had to get the cross member this clean by using lacquer thinner and my angle grinder wire brush. I got 'er done though. Ignore the dents. A new cross member would just get all dented up again anyway... am I right? 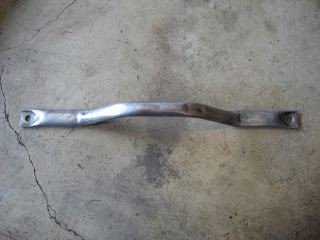 The finished product. You can't buy originality like that! ;-) 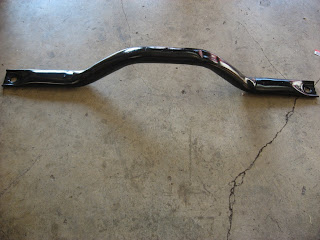 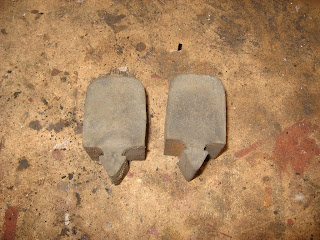 After a short shower in the blast cabinet and a rub-down with lacquer thinner and they're good as new. Honestly though, if rubber parts are hardened and/or cracked, I'll swap them out. These are still good to go and cost 10 bucks a piece at Mustangs Unlimited. 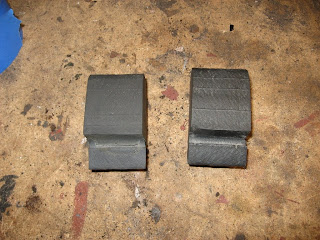 There are several other parts that I've restored to this point but I don't want to belabor the point. I think that as long as a part is functional and structurally safe and sound then it's fair game for restoration. It's actually kind of fun to do and might save you some money in the long run.
Posted by A. Olshove at 12:33 PM