Bringing fuel to the fire

The floor is in, the rear is clean, the engine compartment is painted, and now it's time to install the fuel and brake lines. My brake lines were patched in several places and my fuel lines were not original. In fact, the fuel lines were kinked in several places and it was a wonder that the engine even ran when I got it. So, I gave in to my heart-felt belief that "cars should have gas and be able to stop when you want them to", and bought a new set of both from NPD. I get amazing shipping times from NPD since I'm in OR and they have a warehouse in CA. So in about 2 days I found this big box on my doorstep: 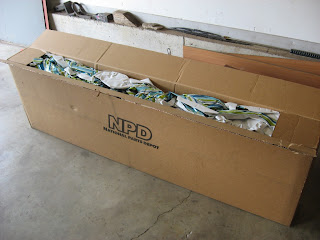 Looking at the packing paper, I was reminded of Christmas so I tore into it like a 10 year-old looking for my new Red-Rider BB Gun and found... this: 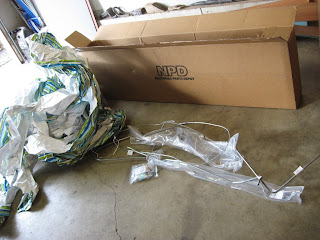 You might notice that the lines are all... kind of... rolled up. That's pretty much the only way they could be shipped short of sending out a 12 foot long box. They didn't roll them up too much such that they couldn't be easily unrolled, however. It just takes a few moments to roll them flat against the floor and knead them into shape with your hands.

I compared my existing fuel lines to the new ones. The short segment that goes along the driver frame rail is at the top and the long segment that goes to the tank is below. Rather than seeing if the bends of the new lines are accurate by comparing to the old, I did the other way around and noted how wrong the existing lines were compared to how the new (correct) lines look. The rusty line at the top has been cut and patched and I think the patch is somewhere on the side of my house. The long line is at the bottom, notice how my old line has a mating connector, is kinked, and bent completely wrong at the right end? 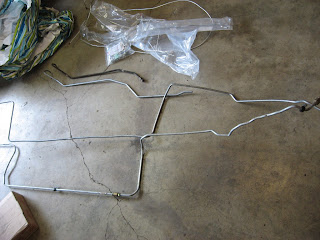 A closeup shot comparing the end of the new line (top) to the old (bottom). Would you reinstall the old ones? 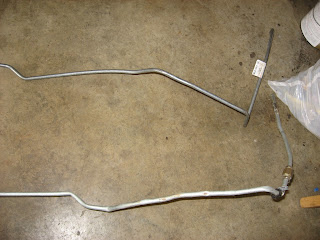 This is the front, middle, and rear brake line sets. 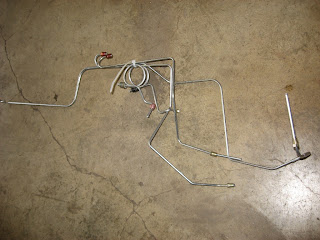 Here's the new long tunnel segment compared to the old. Note that the old segment contains a couple of mating connector patches. 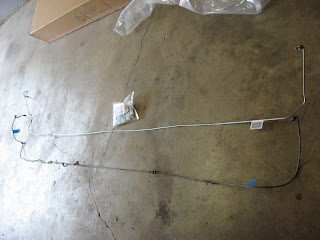 I had failed to take detailed reference pictures of the fuel and brake lines when I had disassembled the car last year. Reference pics wouldn't have helped for the fuel lines though since the existing lines were A) Bent wrong, and B) Weren't attached to the driver side rocker since there was no driver side rocker when I bought the car.

So, I shouted for help on the VMF and received some very helpful reference pictures from a local guy here in the Pacific NorthWest (Thanks Eric!).

I started out by installing the brake lines first beginning with the passenger front brake line: 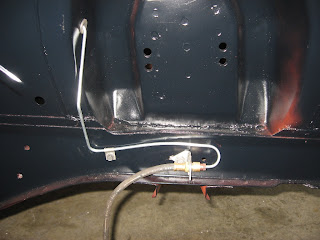 Then the lines across the engine compartment firewall to the distribution block, and the driver side front brake line. 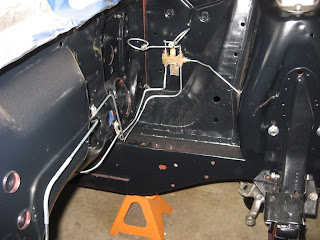 And then down the tunnel: 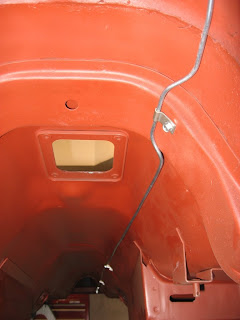 And finally to the rear brake flexible line bracket. 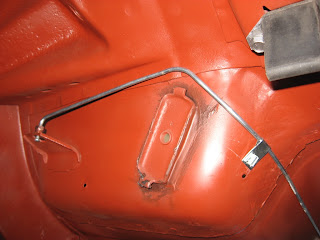 Next, I installed the fuel lines starting at the driver outside frame rail and going from a rubber grommet in the apron through the pre-cut hole in the torque box. 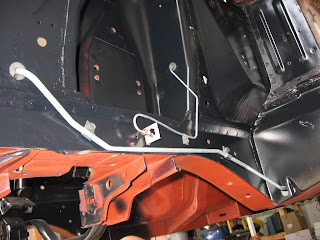 On the other side of the torque box, is where the long fuel line connects via a flexible tube. I'm using the wrong clamps on this since I used standard hose clamps and the factory used crimp style clamps. 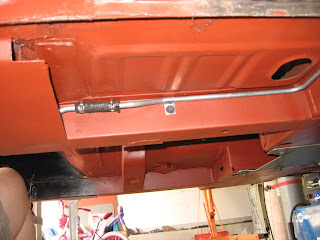 From the flex line, the fuel line goes back along the floor support, across the front of the lower seat reinforcement and then down along the inner rocker. 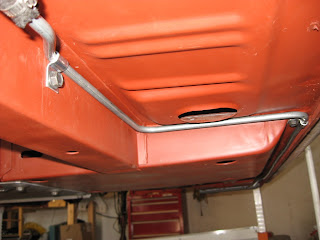 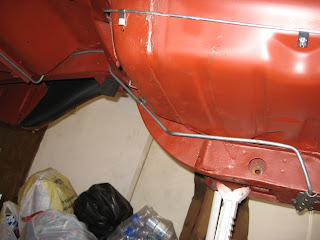 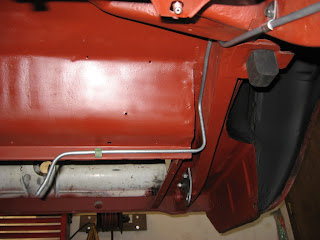 The hardest part of this task was fixing the sheet metal holes through which the various fuel line clamps where bolted. A few of them had been stripped out so I had to weld them closed, drill them out again, and repaint the area. Also, the butterfly style brake line clamps took me a few minutes to figure out but generally, this was a very easy task.
Posted by A. Olshove at 3:38 PM