While I was working on the cowl, I had ordered a complete suspension from the great folks at OpenTracker (more on this later). Part of the order included an Arning drop template. The Arning drop is also known as the Shelby drop. There's a lot of technical information and history behind the this Arning drop but the bottom line is that the upper control arm is lowered one inch. The affect is not that it physically drops the car one inch but rather that it changes the alignment of the wheels in a favorable way to keep rubber to the road more affectively and generally improve handling. Here's a LINK to the DazeCars site for more info on this technology.

In preparation for painting the front clip, it seemed like a good idea to drill the holes in the shock tower so I didn't muck up the new paint. 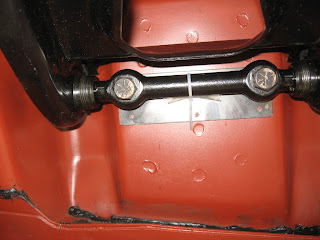 I then removed the template/control arm, center punched the marks for the new holes and then drilled 1/8" pilot holes through the shock tower and repeated on the driver side. The stepped drill bit you see is what I used to drill the holes to 1/2". I got a kit of 3 stepped bits from Harbor Freight and selected the one that had the deepest cuts. 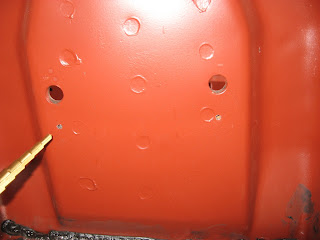 I proceeded to drill out the holes all the way to the 1/2" step on the drill bit and then woggled the bit around to get my extra 1/32" (17/32" holes). I deburred the holes and tested against the control arms again and they fit great. Mission accomplished. 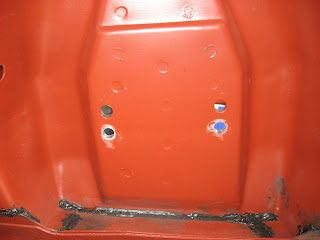 Having performed my last destructive improvement of the front clip, I felt it time to prepare for paint. The first step was to go over all of the newly exposed metal such as the Arning drop holes and the newly patched passenger outer frame rail among other general touch-ups. I followed up by masking off the cowl. 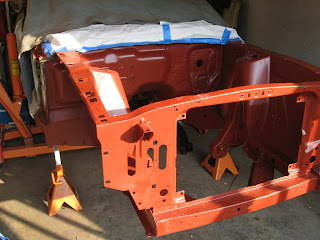 I then wet sanded all surfaces with 320 grit sand paper to allow for better adhesion of the paint since the primered surface has been sitting exposed for a couple of weeks getting god-knows-what splattered over it. The sanding also smoothed out some rough spots that I think were sprayed too dry. The sanding was followed by washing of the surfaces to remove the dust and finally entirely wiped down with lacquer thinner. 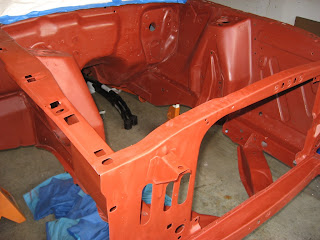 I had purchased some PPG Deltron in a DBC9295. The BC stands for Base Coat but the guy at the PPG shop convinced me that I wouldn't have to clear coat it because clear is used to make the paint a semi-gloss?? I'm okay with that since It's under-hood and won't be exposed to sunlight very much (no UV protection) and a clear would be undesireable because it would add gloss. At any rate, I decided to bite the bullet and buy a pint of this paint with a quart of reducer for a total of $70. Mixed 1:1, this provides 2 pints of paint.

It sprayed nicely enough and I didn't have any problem with runs. I did have a couple of small problem areas with "fish eye" though where the paint refused to adhere to tiny areas of primer. I didn't expect the paint to be so sensitive to contaminants but I had a couple of small areas where I think I sweated on the primer and/or got my greasy paws on the surface. I took a chance and waited for a few minutes for the spots to dry before sanding on them with 600 grit with effort to get into the fish eyes and then painted over the spots again and they seemed to take paint after that. Kind of annoying since it was close to 80 degrees and my sweating like a pig didn't help matters. I have a new respect for professional painters that know how to avoid or fix these kinds of problems.

Generally though, I'm happy with how it turned out. I don't think the flaws will be very noticeable once the engine and such are installed. 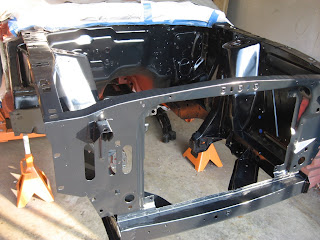 I tried not to overspray the bottom too much but just enough that it looks kind of original. I hope this about right on the bottom: 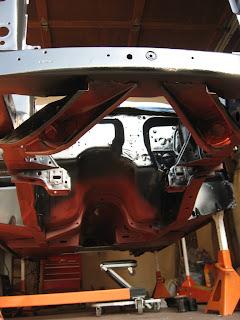 I've got a lot to learn about paint. I'm certain that this job would not be acceptable on exterior panels and/or I'd have a bunch of sanding to do to keep things even. Also, a mixed 2 pints is really cutting it close. I managed 2 full coats but was getting concerned toward the end.
Posted by A. Olshove at 9:12 PM