It's come time to install the front suspension. But I need to do one small task first.

Several months ago, I purchased a set of front disc brakes that came off of a 71 Ford Ranchero Squire. Prior to purchasing them I asked the guys on the VMF who confirmed that they would be a direct bolt-on for the 68 Mustang. $125 later I had a pair of these: 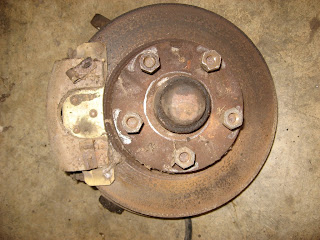 A bit worn and rusty looking aren't they? Here's a shot of the back side: 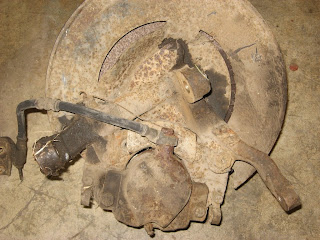 Not to worry, I wasn't about to trust my life to a set of brakes with an unknown repair history so I set to taking them apart for refurbishment. First the grease cap comes off: 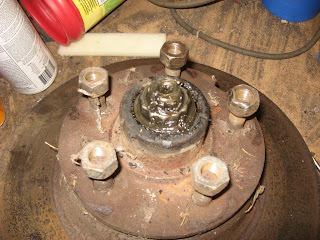 Then a cotter pin, a nut cover, and the spindle nut itself. The rotor then just lifts off the spindle as so: 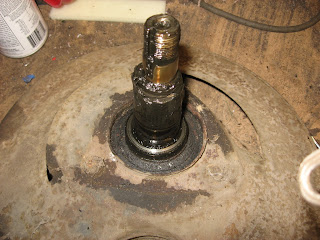 It helps to see what your doing if you wipe the old grease off: 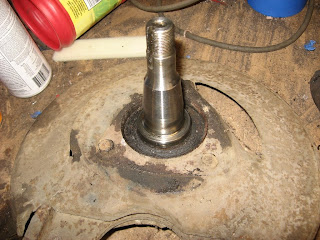 Finally, the dust shield is removed to expose the bare spindle and caliper mount: 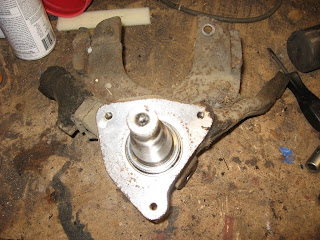 In preparation for the blasting cabinet, I masked off all of the mounting points and the spindle shaft: 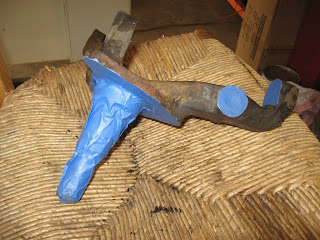 Finished with the blasting cabinet: 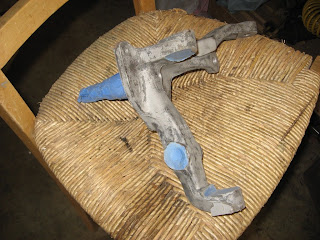 Finally, the spindle is painted with self-etching primer and Seymour Cast Blast paint. The masking is removed and viola! 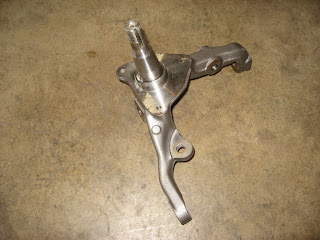 Well, my buzz only lasted a couple of seconds because as I scanned across my bench I saw this and knew that I'd just begun: After a mad flurry of bench wire wheel and blast cabinet, I stood there and rubbed my stiff neck and beheld... clean stuff! 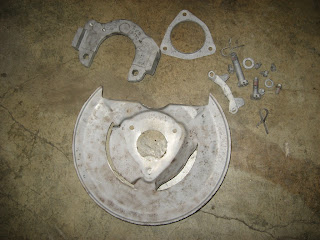 I wiped my newly clean stuff down with lacquer thinner and set to painting the parts either with Dupli-Color semi-black or Rustoleum Stainless Steel depending on my whim: 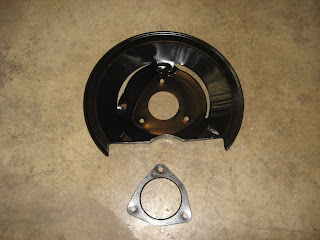 I painted the caliper mount with Cast Blast and reattached the dust sheild: 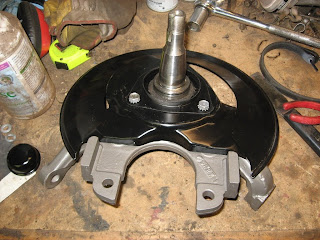 I bought refurbished calipers for $28 each and new Rotors for $49 each, and new bearings and seals, all from NAPA, and reassembled the brakes. Looks a damn-sight better than when I started eh? Overall, the front disc brakes cost me around $350 total including new 68 Mustang disc flexible brake tubes. Edit: This caliper is on the wrong spindle. If this spindle were mounted, the bleeder valve would incorrectly face forward and the calipers wouldn't bleed all of the air. The bleeder valves should face rearward. 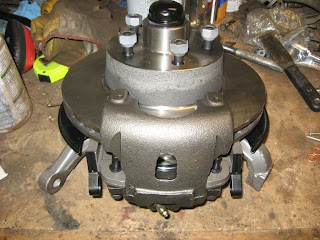 However, it's all fun and games until you realize that the front brake line kit you bought was for drum brakes! I bought a set of 68 Mustang disc brake hoses. They mount differently than the drum brake hoses and face in the opposite direction! Note the location on the hard line where the connector should be to mate with a disc flexible line: 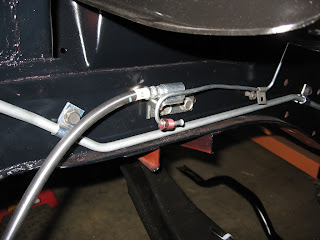 Long story short, I bought a double flare tool from CarQuest for $24, and a pair of the correct 3/16" compression nuts from NAPA for $1 and was able to fix the driver side line but I had to make a new line for the passenger side. But hey! I learned how to make brake lines!

Here, I test fitted the new spindle and caliper to test the brake tube reach. Looks like it's going to work. 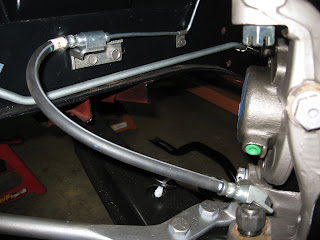 Note: The brake tubes I bought were 68 Mustang brake tubes. The 71 Ranchero brakes I bought came with tubes but although 70-71 brake tubes look similar, they're not the same. The mounting holes are a little further apart in the 70-71 tubes and won't line up with the factory disc holes in the Mustang frame rail. Yes, the holes are drilled but you have to drive a screw into one of them to tap it if converting from drum.
Posted by A. Olshove at 9:43 AM