So, prior to painting the front clip of the car, I yanked the old, foul, greasy, rusty, pathetic excuse of a front suspension and tossed it all to the side of the house. The ball joints were loose, the rubber dust caps were all mashed and covered with grease, the rubber bushings were all cracked and hardened, and the rear springs were rusted through in spots. I agonized and literally lost sleep over what to do next. Should I refurbish the existing suspension or buy new? Individually, the parts of a suspension aren't all that expensive but when you put everything together, you get up around $1400 to replace front, rear, and steering components. I also ran some numbers on refurbishing and was a bit shocked that the components of the control arms are nearly as expensive as entire control arms except you have the added bonus of time and labor to clean up the arms (rusty and pitted in my case) AND install the ball joints, shafts, etc., some of which require a press. Long story short, I decided on an entirely new suspension.

Now, if you ask the VMF folks where to buy a suspension, a cult of the church of OpenTracker will reveal itself to you and the members, known as "the happy customers", will profess their undying love and loyalty for John and Shari. Well, I'm not one to pass up a good cult so I joined up and forged a deal through John's wife, Shari, to purchase an entire suspension, front, rear, and steering, with a set of their famous roller perches and a roller idler arm because 9 out of 10 Mustang enthusiasts recommend roller perches, claiming that it "dramatically" improves the handling of the classic Mustang.

Dealing with OpenTracker is a good experience overall once I got past my me me me, now now now internet buying mentality. Evidentally, OpenTracker is well-respected in the classic Mustang community (Check out FordMuscle.com's tech article) so you have to understand that they're busy but they will get back to you (it took about 3 weeks from the first email to delivery of the parts). If you contact them with specifically what you're looking for in ride and handling, they'll customize your order to fit you're needs. I asked for 1" lower stance with a "quiet and comfortable street handling" and they delivered with front and rear springs and shocks matched to my requirements using their experience with the products they sell to determine the specs. They also claim to pre-inspect and adjust all of the control arm components prior to delivery.

The only problem I had with my order was that part of it was lost somewhere between California and here. Evidently, somewhere along transport, the post office depot ripped the box and taped it back up but didn't bother finding the lost components to put back in the box. No problem though! Shari at OpenTracker sent out replacement items with no hassle whatsoever within the week. I'm afraid I have to join the cult because I'm terribly happy with the experience.

Here are the front suspension components:

On to the install!

I started with the new lower controls arms which come with sway bar end link washers (seen affixed with a zip tie). As you can see, the natural metal around the ball joint cup is unprotected. 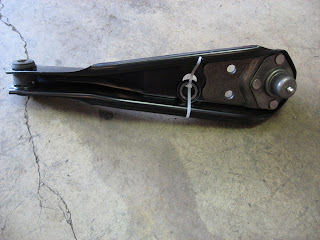 So, I masked off the area and wiped it down with lacquer thinner: 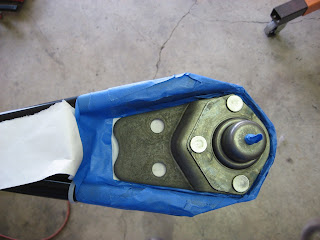 I then applied self-etching primer and Rustoleum Stainless Steel paint: 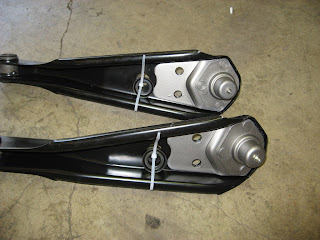 I thought I'd throw in a comparison pic of the old LCA (Lower Control Arm) with the new LCA. Note that the old one has "jacking tabs" and the new one doesn't. Also, the old ones have the sway bar link washers crimped on: 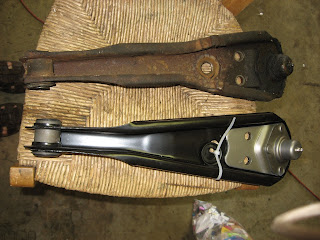 From above you can see the difference in shape. The new arms probably wouldn't pass the muster for concourse judging so concourse people should keep that in mind for when you make the decision to refurbish or buy new control arms. 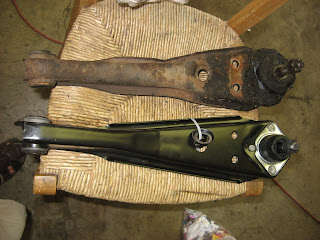 The Upper Control Arms (UCA) look more similar from below... 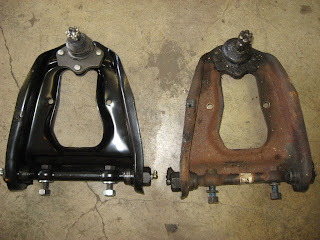 And above... BTW, it's come to my attention that my old UCA and LCA are not original to the car because I've been told by concourse judges on the VMF that 68 Mutechan, NJ cars had 4 rivets holding the ball joins to the control arms and mine only had 3. So, no loss going to new arms for me anyway. 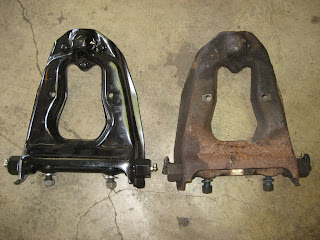 The LCAs are ready to go on the car but the "cam" bolts that mount them to the car were pretty rusty and nasty. 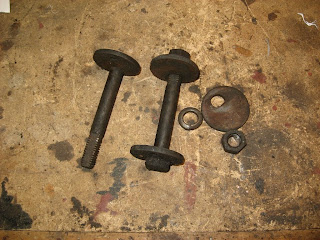 Some time in the blasting cabinet and paint took care of that: 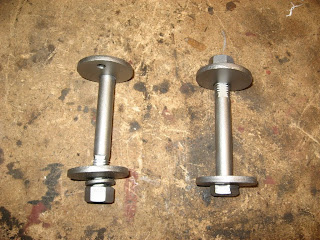 The LCAs are installed by dangling them by the skinny end from the cam bolt as so. The cam bolt provides the camber alignment adjustment by allowing the LCA to move in or out. 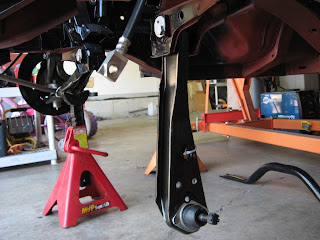 I then installed the UCAs by inserting the two large studs through the holes in the shock tower. I had drilled "Shelby/Arning drop" holes an inch below the original holes so those are the ones I used. I installed the large washers and self-locking nuts on the other side of the shock tower and torqued them down to the specs found in the factory service manual. 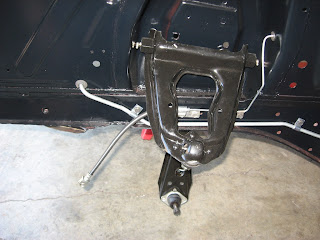 I then installed my new disc brake spindles making sure the steering arm is pointing to the rear of the car and torqued the castle nuts and inserted the cotter pins. 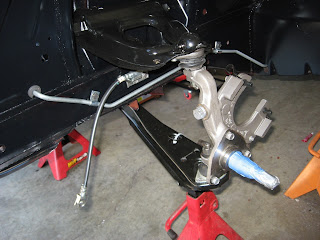 The next parts I needed to install were the strut rods that adjust the caster alignment by moving the LCAs forward or back. However, my strut rods were in ugly condition. 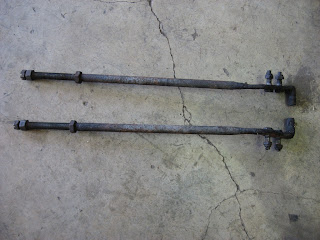 About and inch of the inside threads of the passenger rod was stripped so I only bothered to clean up the driver side strut rod. I used my angle grinder with wire wheel and then 60 grit flap disk. 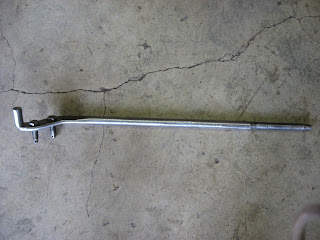 And then I sprayed 2 coats of self-etching primer: 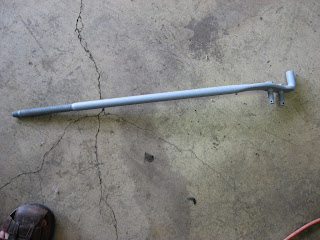 I ordered a new passenger side strut rod from Mustangs Unlimited. I was a bit disappointed to see that even though I ordered the 67/68 rod, the design had been changed. As you can see from the photo below, the new rod (center), doesn't have the small threaded section at the end that was used for a safety nut. Also, the new rod seems to have a shorter threaded section than the original (bottom). I decided to go ahead and use the new strut rod for now. I'm considering taking the original passenger rod to a machine shop to have the stripped threads recut. 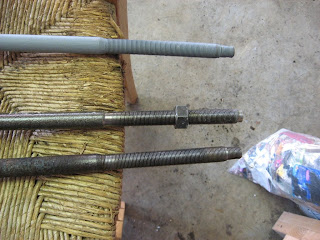 The strut rods, after paint. Something to keep in mind when buying an after-market strut rod is that they don't come with LCA mounting studs so keep your originals! 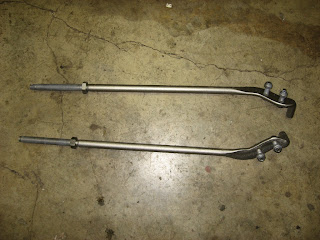 The new strut rods were then installed with the LCA nuts torqued to specs and the cotter pins installed. The threaded area of the strut rods was adjusted to approximately center of the threads but not yet torqued because and alignment needs to be performed after the car is back together. BTW, here's a good LINK on aligning a classing Mustang. 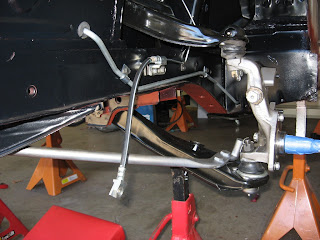 And finally, the new 1" sway bar. Here's the kit with bushings and links compared to the wimpy original sway bar. 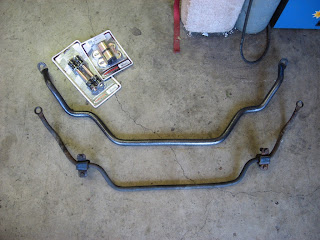 I started by affixing the sway bar bushings to the mounting points on the frame. The sway bar bushings came with a special grease that I smeared around inside the bushings presumabely to prevent squeaking. Next, the end links were assembled and bolted through the LCA mounting holes (remember the LCA washers) and torqued to specs. I then squirted a couple pumps of grease into all of the grease fittings. 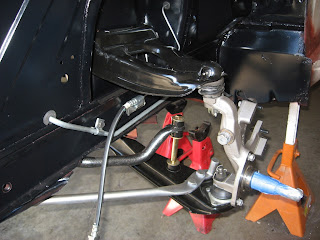 With the exception of the steering assembly, that's pretty much it for the front suspension install except for the springs and shocks but they won't be installed until I put the car back down on it's wheels. Here's the money shot from below: 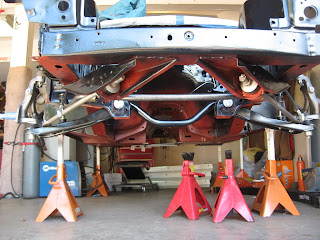 Update: I decided to try to install the springs even though there was no weight on the suspension. The springs are 1" lowered 520 lb rating with polyurethane shock tower insulator. The shocks are KYB gas-adjust. 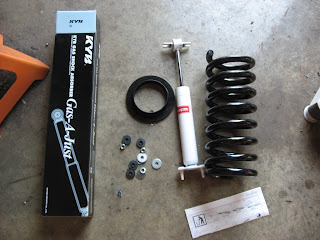 Well it turns out that I could manually force the control arms down enough to pop the springs into place. I was a hair disappointed that I didn't get to use my home-built spring compressor but with the 1" shorter springs and the 1" Arning drop, I had enough clearance. Before hand, I had to torque down my new OpenTracker roller perches though. Tab goes toward the back and the "loose coil" end of the spring butts up against the tab. 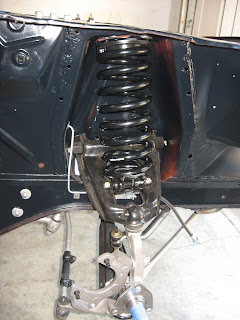 I then could bolt in the shocks although I am unable to compress them enough to be properly mounted to the top of the shock caps until there is weight on the suspension to compress the springs another 3" or so. 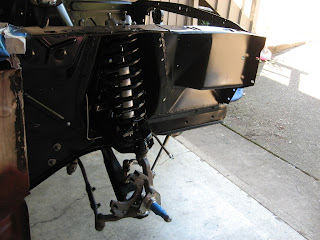 Here are some pictures from a few months ago to remember the good old days by: 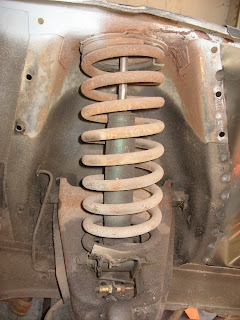 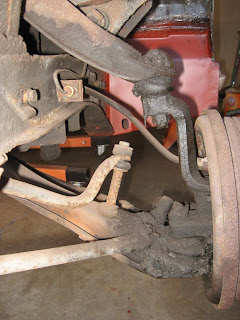