Got the call from Rose City Mustang that sheet metal I had on order has arrived so I went to pick it up. On the way downtown, I stopped by APS paints and picked up a quart of DP74LF and a pint of catalyst. DP74LF is an epoxy 2 part primer that sticks to and will be stuck to by darn near anything. However, at $44 per quart of paint and $25 per pint of the required hardener, it's not for the faint of heart.

Anyhoo, I picked up the sheet metal and brought it home. The parts below from left to right are inner rocker panels, torque boxes, right front frame rail extension, and right outer rocker panel extension. 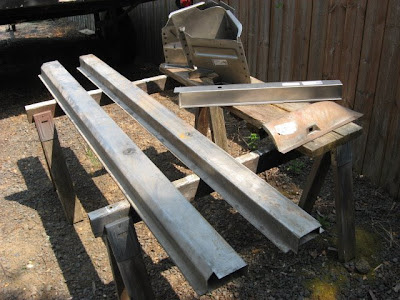 I was a bit surprised that it already had rust spots. Not just flash rust but actual rust. Note the outer rocker panel extension. 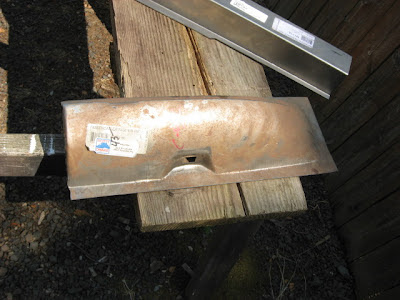 Being that it was bare metal, I felt the overwhelming, deep desire to protect and paint these parts but first I had to remove the dirt and rust so I washed them with some dishwashing detergent, water, and sponge. I then dried the parts and coated them heavily with Ospho. I plugged one end with a rag and poured some Ospho in the other end and swashed it back and forth and around until I coated in the inside too. I let the Ospho dry and then washed the excess on the outsides off with soap and water. I didn't rinse the insides because I wanted the heavy coating to remain. The outsides would be painted, however, so I wanted good adhesion. Notice how the Ospho removed the rust on the outer rocker extension (The short, fat piece). 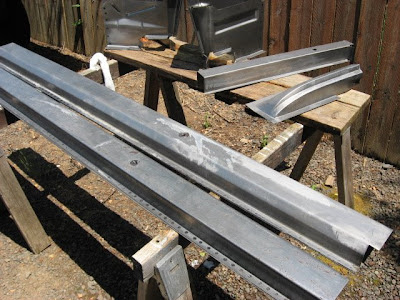 Finally, I mixed up some DP74LF and hardener, fired up the air compressor, and shot the "Red Oxide" primer with my Harbor Freight gravity feed spray gun. 6 ounces of primer to 3 ounces of hardener did all of this in 2 coats. Clean up required the use of acetone as regular paint thinner just serves to harden the epoxy and makes a mess. Ask me how I know. ;-) 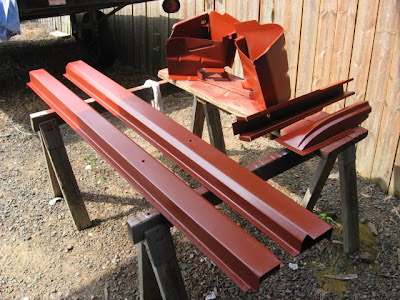 Using a red oxide color is a kind of a Ford Mustang originality thing. The original Mustangs were coated with red oxide primer before being painted (or not painted).
Posted by A. Olshove at 6:42 PM