In addition to the major floor damage, there are some more minor rust issues that need to be addressed. These minor issues were quoted at around $2000 to repair in themselves. I decided that I need to start here to break in my new "classic car restorer" hat. Firstly, there's an area around the upper edge of the engine compartment where the fenders are bolted to. This is the called the upper inner fender apron or referred to as the upper shock tower area. Each side of the inner fender apron (engine compartment) is basically make up of 3 panels. Front, Rear, and shock tower (center). It's in the strategic locations where ford spot welded these panels together (a circle of about 7 welds) that rust forms. There are 2 of these areas per side for a total of 4 potential rust spots. My Mustang came with 3 rusted through but I only took pictures of 2. 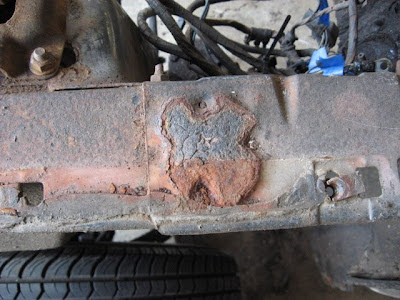 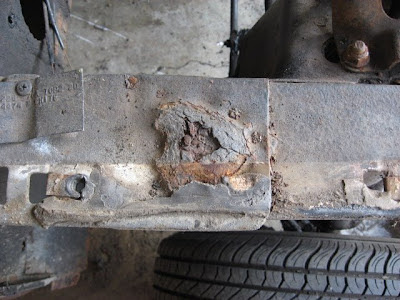 Secondly, there's a shelf where the battery tray fastens to the front right inner fender apron that rusts out due to battery acid and being a generally good place for water to pool. Mine was no exception. 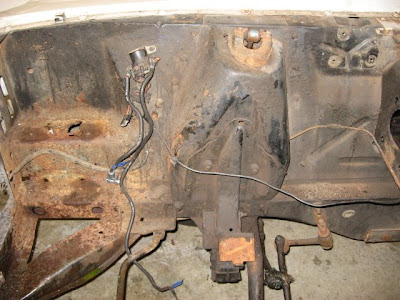 Finally, there's a place on the lower front outside frame rail where the front bumper bolts onto the car. The frame rail in this area is a hollow C-channel hunk of metal with a flat plate section spot welded to the outside section to form an enclosed box. This flat plate houses 2 captive nuts welded into it into which the bumper brackets bolt on. The section that was in contact with the bumper bracket between the two nuts popped in my hand when I was air-hammering scale rust off the frame rail. This is a "normal" area of damage, however, it's normally on the passenger side where it fails due to being below the battery. Mine failed on the driver side instead but the passenger side is fine. 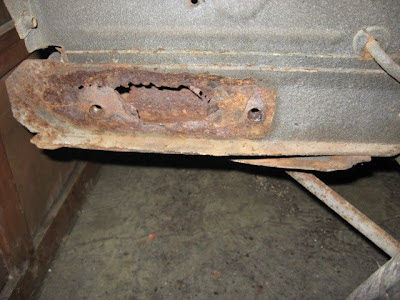 These areas are where I'll initially focus my attention. They're not structural and repairs will be generally hidden if things go terribly wrong. Plus I'll get to practice drilling spot welds and practicing my plug welding skills.

Mustang's are of unibody construction and are assembled out of sheet metal panels that are overlap spot welded together. It's my job to remove these spot welds to separate these panels and then to reattach them using a method that simulates spot welds by drilling a hole in the top panel and filling the hole by welding a "plug" of material into the hole onto the bottom panel thus securing the panels together.
Posted by A. Olshove at 8:49 PM