Well, I've had my fun.  I've driven the car night and day, to shows, to towns, to fast food joints, stores, meetings, family events, work, and play.  I've driven 2,621 miles since I got the car out on the road again after it's four-year furlough.  But now the darkness is falling along with wind, rain, and the average temperature.  Fall has fallen upon the great Pacific Northwest and so has the number of hours I am able to drive Ol' Rusty.  With the loss of wheel-hours, I gain shop time.  Time to start and finish projects that I've been putting off with the excuse of "Just one more trip, we don't know how many sunshine days we have left".  Well, now we know.

So I thought to myself, "Hey self. What would you like to do to improve the driving experience?".   "Put in a CJ 429, a T5, and 3.25 locking rear diff!", I exclaimed.  "No", I replied to myself calmly, "we don't have the budget for that but do you know what would be nice?  Power steering".  I asked, "why's that"?  "So the wife can drive it too.", came the reply.  But I knew that's just what we would tell other people rather than the truth that I'm an old, weak, software developer and my arms get tired after a few hours of slow maneuvering.   But that would just be our little secret.   I cackled quietly to myself about my own cleverness and set to searching the interweb for a suitable candidate.

My intention was to refurbish an original system rather than to buy a modern equivalent.  I knew that they had a terrible reputation for leaks and annoyance and from reading the VMF, people yank them all the time in favor of manual steering for simplicity and to avoid the horse power loss.  So, it shouldn't be too difficult to find a set fairly inexpensively.  My goal was to do it as cheaply as possible as has been the unifying theme throughout the entire build of this car.  I set a goal of $300 for the entire system including pump, power cylinder, brackets, and linkage and then whatever replacement and rebuild parts cost.  I found a seller on the VMF willing to meet my requirements and gave me a deal on shipping.  A week or so later, I had a rather distressed, complete, power steering system sitting on my bench awaiting my attention.  The nice thing was that I could still drive the car while I was rebuilding the power steering system and so I put some more miles on her during the day while I cleaned, painted, and rebuild during the night.

The Mustang power steering system is pretty straight-forward.  There's a pump that squirts Type F transmission fluid through a high pressure line into a control valve.  The pitman arm from the steering box is connected to a ball stud on the control valve that feeds pressurized fluid into the slave cylinder that is basically a hydraulic power cylinder that forces the wheels to turn based on which way the ball stud is pushed by the steering box. Fluid is cycled back to the pump via a low-pressure return line.

This rebuild is a BIG job so I'll be breaking it up into a series of posts with the rebuild of the control valve being the first followed by the slave cylinder, the pump, and finally, the installation.  For the entire rebuild I used my old faithful Factory Service Manual.  It gives step-by-step instructions for each task but it misses a couple of details that I'll try to cover.  The various joints are separated with the assistance of a pitman/tie rod remover.  Never use a pickle fork... ever... never... it's just bad.  Don't do it.

So, the first step was to break the system down into it's basic parts.  The tie rods can go away since I'm reusing my existing ones as can the hoses since all will be replaced with new. 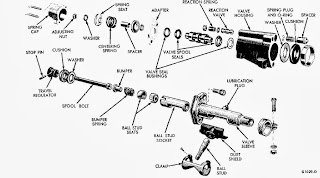 
I then cleaned up the various parts, primed, and repainted them.  I bought the control valve rebuild kit which included new seals, gaskets, centering hardware, and ball stud hardware.  If the kit you buy doesn't include the ball stud socket sleeve  you can buy one separate.  The control valve spool itself can become worn and needs to be inspected.  If you need one, you can get new ones from the various vendors.  Mine was reusable.


The adjustment of the centering spring nut is probably one of the most important adjustments that needs to be done to the control valve.  The Factory Service Manual covers this pretty well but basically, you tighten it to around 100 inch pounds and loosen it a quarter turn.  The cap can then be put on.  Don't forget the ring gasket.

One of the biggest complaints about Ford power steering systems is the leaking.  Well, guess where a majority of leaks come from.  We've replaced the seals and gaskets but there's still a possibility of leaks.  Guess where from.  Come on, guess...
.
.
.
Give up?  If you said, "From the tube seats", you win!  These rather weak aluminum inserts, once crushed by their chosen hydraulic hose, will probably never accept another hose into their loving embrace again.  Never fear, there's a man that goes by the name of Chockostang  that carries ALL of the parts for these systems and will sell them to you including the tube seats.  The tube seats are just press-in aluminum thingys that are easily removed and replaced.  All I did to remove them was to grease up a 1/4-20 tap, threaded it into the seats and pulled them out.  The grease on the tap was to keep the chips from the tap from falling into the valve causing it to instead, stick to the tap.  It was with this method that I removed all of the smaller 5/16" tube seats and replaced them with new ones from chockostang.  Sometimes you can just insert a hooked tool into the seat's hole and wiggle it loose.


So, I was feeling all smug with my freshly-rebuilt control valve when I happened upon a thread on the VMF discussing control valves. In the thread, it was casually mentioned to "be sure to put the spool in the correct way, grove [sic] on the small o.d. has to go to the big valve side[hose side] or it will not work". My eyes popped open at this. The factory manual said NOTHING about making sure the spool valve was facing a particular direction. So I inquired further and chockostang replied that indeed, the "groove" on the spool valve has to be on the centering spring end of the valve (as opposed to the "hose side" as mentioned in VMF thread). I felt it best to double-check my install of the valve and sure-enough, I had it backwards. I reversed it and buttoned it back up, no-one the wiser... except everybody reading this of course.


I had to re-adjust the centering spring and re-install the cap, of course but once that was done, I used a grease gun to squirt a very light pump of grease into the zerk fitting of the control valve (too much may cause it to bind) and called this task done.