Well it's Midsummer and basically, night, so I thought I'd do an update as I'm sure folks are pretty tired of staring at the seatbelt installation post I did waaaay back in May.  So, here we go!

First, I got the dual exhaust installed!  I used a local shop called Exhaust Specialties & Brakes (ES&B).  I originally was going to simply order an exhaust kit online and do it myself but with shipping, I would probably have been into it over $300 plus the hassle of installing an exhaust system on my back rather than on a lift.  Also, I was worried that any issues I ran into, like poor fitment or contact with the transmission or tunnel, and I would be in a world of hurt.  At any rate, ES&B originally quoted $600 which I felt was a bit high but after talking with the specialist about the car and what it was and explaining that I'd done it all on a fairly tight budget, he agreed to $500.  I had already purchased the non-concourse 68 GT style exhaust tips so I handed them off and went on my way.  He called me back a few hours later and I went to pick up the car.  He had installed the exhaust tips with a set of FlowMaster mufflers and and H-Pipe.  The car sounded WAY better than the old, rusty single-exhaust so I have to say I'm a happy customer. 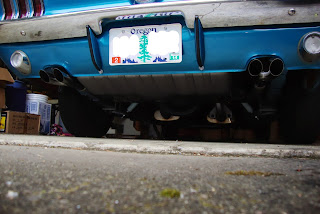 Second, I finally decided to go ahead and put on rocker mouldings as it came from the factory with.  I drilled out the original clip-mount holes and riveted on a new set of plastic clips and snapped them back on.  I think they look fine but ultimately, I may yank them and repaint the rocker in the long-run. 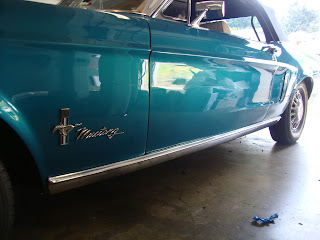 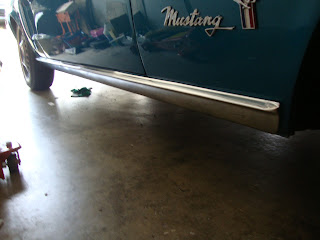 I sprang for a new set of repro bumpers with free shipping from CJ Pony Parts.  They arrived, I installed them, and they fit and look just fine.  Not bad for around 200 bucks. 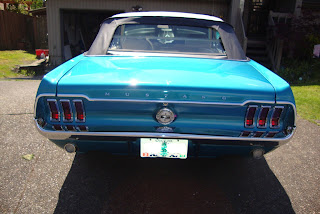 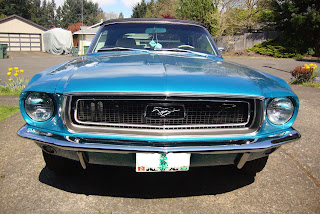 As I was driving around this Spring, I noticed that the temperature would creep up into "hot" territory if I sat idling at stop lights or fast food joints for more than four or five minutes.  I adjusted the timing and idle mixture, and checked the cooling system and coolant and decided to try adding a fan shroud since that's a fairly inexpensive solution and also serves as a finger saver by shrouding the fan against errant digits.

I bought the shroud from NPD and shroud mounting hardware from CJ Pony Parts.  After removing the fan bolts, the shroud was pretty easy to install.  However, after bolting the fan back up and giving it a test spin, I could hear it ticking quietly against part of the shroud.  I found that the fan needs to come back about 1/4" to safely clear the shroud.  The original spacer is 2 7/8" but the next shortest is the Scott Drake 2 1/4" fan spacer so I ordered it from CJPP and that gave me the clearance I needed.  To be honest, though I think a spacer would be perfect at 2 5/8 if we could get one.

Well, now that the fan clears the shroud, it spun dangerously close to the bend in the upper radiator hose so I hacked about 3/4" off the thermostat end of the hose and re-clamped it.  That gave me the extra clearance I needed.  I finished up with the orange "warning" sticker and called it good.  While I was at it, I put factory correct hose clamps on the upper and lower radiator hoses.  The fan shroud has since been a success as the temperature creep hasn't happened since.


The first car show I attended was a local hardware store with judging being performed by the store employees.  The rain was coming down hard so there were only about 25 cars in attendance with 5 in my own class.  At the end I was happy to walk away with second place.  First went to a very nice 1970 Dodge Challenger R/T.

The next show was the All Ford Mustang Show and Swap Meet put on by the local Mustang Wranglers car club.  I had trouble finding the fair grounds so I was a bit late in showing up.  I didn't place in my 67-68 Mustang Convertible class. The first place trophy went to a VERY nice, freshly restored red 67 with all the trimmings (including tilt away steering).  Second place wen to an interesting (mostly) original Gold 68.


The next show I had attended was the Cruisin' Sherwood show.  This is a really awesome show as the town of Sherwood Oregon closes off the entire down-town and fills it up with a large assortment of awesome cars.  I was flanked by a Cobra replica on one side and a VW bug on the other.  Honestly, I don't even remember which cars got what prize but the event was great.  Oh, and I had to be there by 5:30 AM to set up.. ACK!

And finally, the latest show I had attended was the Tigard Festival of Cars at the Tigard Balloon Festival in Tigard, Oregon.  Like the All Ford Show above, this too was hosted by the local Mustang Wranglers club.   Oddly for a Mustang club event, they classed all mustangs of all body styles from 65-70 in one class.  Didn't place in this one either with first going to a 70 Mach 1 and second going to a 66 Coupe.

Currently, I'm just enjoying the Summer and driving Ol' Rusty whenever I can.  During my bouts of motivation, I've been restoring a power steering system for Ol' Rusty so my wife can drive her.  More on that later.