Is it Summer yet!?  It is?  Could have fooled me considering that today is the first sunny day we've had here in Oregon for the past 3 weeks.   Well, not only Sunny but somebody handed me my own personal 80° F  (26° C)  day to do with as I wished.   Well, I wished to finally primer my doors and fenders.  "Normal" people were going camping, fishing, hiking, the beach, etc.  They have no idea of the fun they were missing.  Fools.

So anyway, I had these doors.  They looked okay now on the outside except I had to remove the gooey adhesive that held the vapor barriers on the inner door panels.  I also worked the area over with a knotted wire wheel to remove some of the old paint that was left by the media blaster. 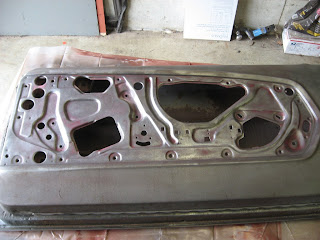 I could have just ignored the evil lurking within the doors but I chose instead to expose it to the world (evil hates when you do that).  "Evil" in this case was our old buddy "surface rust".  Well, I was joking around with another Mustang victim owner, James regarding sticking my hand in there with an angry angle grinder.  I was... apprehensive... upon recalling my experience doing something similar up under the dashboard awhile ago.  I decided to toss caution to the wind and risk one of my most favorite appendages by screwing the 3" cup brush onto the angle grinder, dipping my arm into the access holes, and going to town on the surface rust I could reach.  I came out of it with everything I needed to do my day job with both hands but I couldn't get enough force on the rust to truly grind it off.  I did successfully remove most of the flakes and loose oxidation, however.

I then bombed the area with a good coating of Ospho to convert the remaining surface rust after which the innards looked like this: 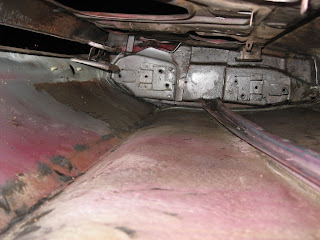 I then scrubbed the area with water, lacquer thinner, and metal prep.  I finished it off by spreading ZeroRust with a sawed-off paintbrush and repeated the process on the other door. 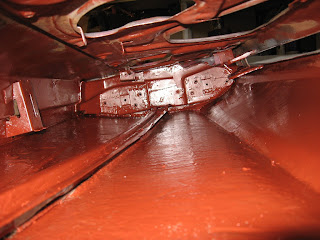 I was then left with two doors and two fenders with bare, media blasted metal.  Now, this metal has been sitting in the relative dryness of my garage which truly doesn't harbor much humidity since the furnace is in there but still, there was some very light surface rust starting to form.  It was very subtle but I could tell it was there.  Also, there were little rust spots where I had sweated on the metal during the prior prep and repair work so all of the metal was treated with a very light coating of Ospho.  The Opsho was then rinsed off using water, then lacquer thinner, and then metal prep.  The parts were laid out in the sun between coatings to allow evaporation. 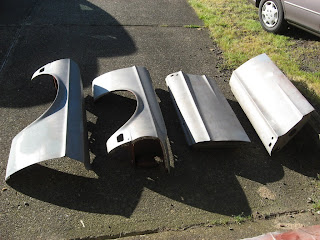 The doors were hung from the engine hoist such that all surfaces could be reached. 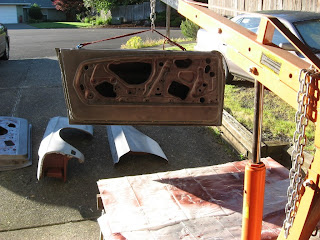 The DP40LF primer was mixed 2:1 with the DP402LF hardener, filtered into my good old Harbor Freight 20 oz sprayer and the first door was sprayed with 2 thin coats.  If you spray too much primer on the interior door panels, you run the risk of filling in the texture.  I was trying not to do this. 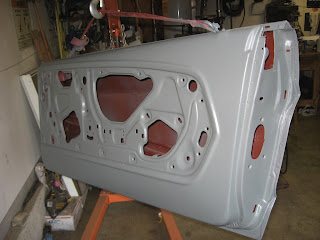 While the primer on the first door was curing, I laid the fenders on a table and sprayed the outside surfaces of both.  I then moved them back outside to cure, took the first door off the hoist, mounted up the second door, sprayed it, and let it cure. 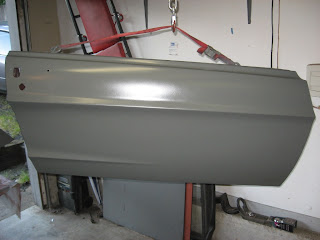 This is what the fenders look like after they were sprayed with DP40LF. 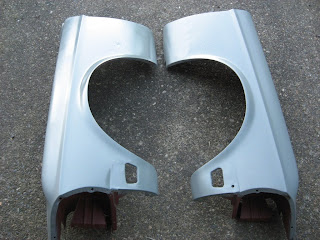