At the end of May I went back to my home town in Colorado where I grew up and went to school for my "Century" high school reunion.  Okay, it wasn't a century but it felt like it.  Everybody else was SO old! :-)

So after the festivities, I poked around some of the old storage buildings on the old man's farm and found something... well... old.  Our 1965 Honda CB160 Sport that my brother and I rode around the ol' stomping grounds back in the day.  Later, I rode a 72 Yamaha 250 MX but the old Hondas always held a place in my heart.  What's not to love?  The 160cc's don't exactly invoke dreams of "Easy Rider" but it was the rice rocket of it's day.  With a top speed of around 80 it was a fun little twin.  However, my dad replaced the 38T rear sprocket with a 60T so the top speed wasn't so... top.
Well, I'd made the trip with my brother and sister (ah yes, the long sibling road trip).  My brother picked up a serviceable aluminum fishing boat for feeding some salmon with on the Columbia so we hoisted the beast up into the back and strapped her down for the 1000 mile trip home: 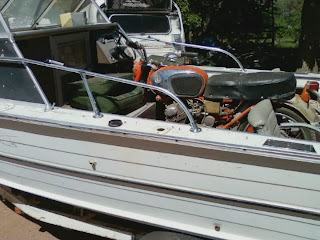 We towed the boat/motorcycle back home over the next 20 hours straight without incident.  We're pretty beat from the trip but we still have a 300 pound motorcycle up in the middle of a boat.  How the heck were we going to get it OUT?  Our old buddy Darrel to the rescue.  He has a pretty large shop so we gave him a call and headed straight to his place, backed the boat up into his shop, rigged a chain hoist to the rafters and... flying motorcycle (try not to let the posters on the wall distract you.. the motorcycle man, the motorcycle!) 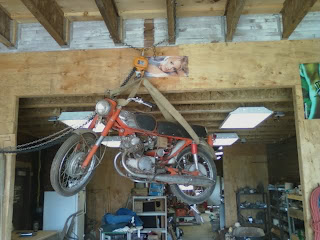 From there, we loaded it into the back of a cargo van and hauled it back to my garage where the real work was about to begin.  Yeah that's Ol' Rusty sitting back there.  Like any spoiled only child that's suddenly introduced to a new baby brother, she wasn't too thrilled about the new addition to the family. 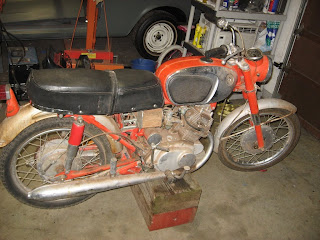 With some pangs of guilt from the neglect of my other project(s), I set to work employing the tricks I'd learned working on the Mustang.  Bagging and labeling parts and doing a complete strip down immediately although I'd already replaced the rear tire so I can move the bike around between work days.  I had also already purchased some parts off the net that I was missing such as those side covers on the floor. 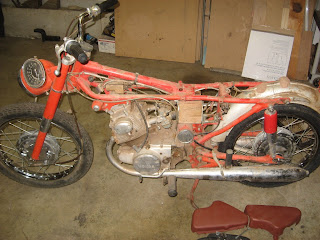 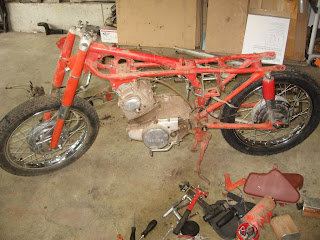 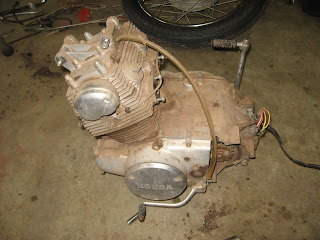 I keep finding uses for the engine hoist.  Besides pulling engines, I've used it to paint parts, pull trees, put the floor in the mustang, support car doors, pulling the pumpkin off the rear diff, and now a motorcycle lift! 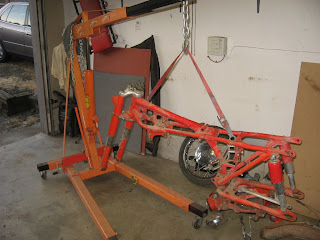 Here are all the metal parts ready to be stripped.  I took the largest and most difficult items to my media blaster, Tony.  The frame, tank, fenders, and swing arm (the thing the rear wheel is bolted to). 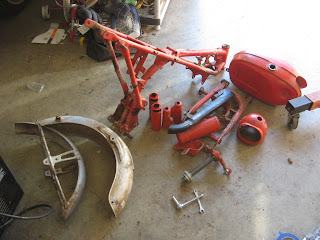 $125 later and I had the parts back.  The fenders had some dents that I was able to mostly bang out with a body hammer but were still rough enough to require some body filler: 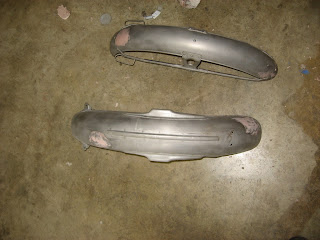 The tank also had a couple of small dents that I had to fill since I couldn't pound or work them out from the inside.  All of the parts were then coated with etching primer. 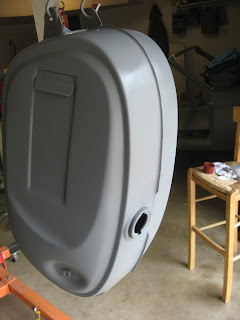 After reading several forums on restoration of these bikes, I found that one of the close-matching spray paints is Rustoleum Apple Red so each part got 3 coats.  The engine case got shot with AlumaBlast spray paint.  I think if this were going to be a heavily used bike or a show bike, I'd have had the parts powder coated but my wife put a strict budget on this project so I kept it cheap. 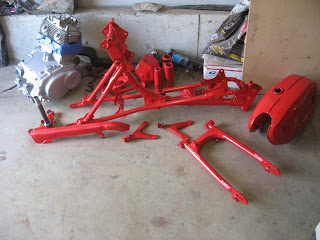 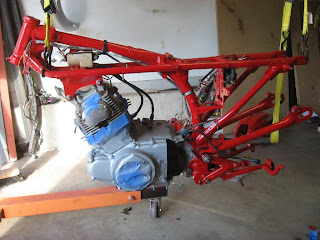 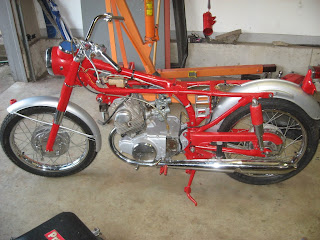 And here it is mostly complete.  I say "mostly" because there are some odds and ends such as emblems, some rubber pieces, and seat work.  The tank emblems were stolen and I soon found out why.  Originals cost around $150 a pair!  I'm holding out for some good repros that I have my eye on. 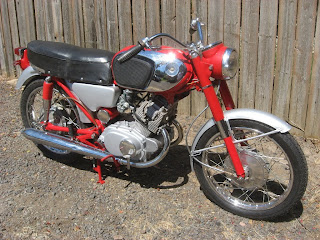 So that's what's kept me from doing anything productive during the past couple of months.  Hope anybody that regularly checks this blog can forgive my straying from the goal but now I can get back to work on Ol' Rusty... if she'll forgive me.
Posted by A. Olshove at 11:10 AM