Okay so I've got a body shell, deck lid, doors, fenders, and a hood.  Time to put it all together right?  Not so fast gimpy, there's more to a fender than just a big round hunk of sheet metal and as such, we have a couple more things to do before we go stampeding off and trying to align the panels.  For you see, fenders do more than just keeping the sunshine off your sick 25's, they also protect the tender nether regions of the A pillar and headlight bucket from all the muck and slime we wallow around in on the roads on a daily basis.  So let's show some love to those thankless little sheet metal minions of the fenders, the splash shields.  Like it or not, they affect the way the fender fits onto the car and probably shouldn't be overlooked until after paint is on the car.

There are four splash shields on a Mustang, one ahead of the front tire (protecting the headlight bucket) and one behind (protecting the A pillar) on each side.  My original front shields were pretty much destroyed as I had chipped away what was left of them when I had disassembled the fenders for media blasting.  The rear ones weren't as bad but still in seriously poor condition so I opted for new repros from NPD.

Here's a comparison of old to new: 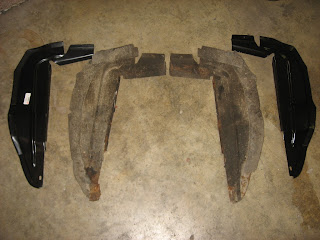 You might notice the conspicuous lack of rubber strips along the edges of the new ones.  I wish I could say that I bought them this way on purpose but then you'd suspect that I'm a complete idiot rather than just an ignorant newbie (take your pick).  I say this because these splash guards are available completely assembled and ready to go.  Unfortunately, I bought these months ago and ferreted them away and now I'm stuck with them.  So I just had to suck it up and figure out how to attach the rubber strips to the shields.

Enough whining and on to the task.  The first thing I did was to compare the old to the new for the placement of the staples that had come with the shield rubber kit. 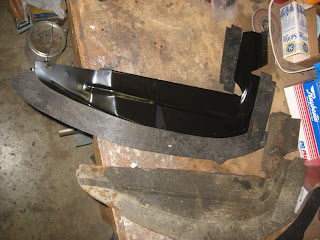 After I marked the staple locations with white grease pencil, I positioned the rubber strip on the shield with clamps placing one on each side of a staple position.  I started out with clamps all along the rubber strip to hold it completely in place but soon found it wasn't necessary and resorted to simply using two clamps.  Also, I had initially just marked the staple positions with lines but after clamped, I drew one perpendicular line to represent one side of the staple and then held a staple against that mark and used it to make the second mark.  The two marks are where the staple holes need to go. 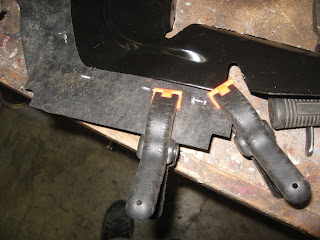 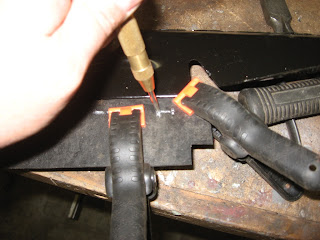 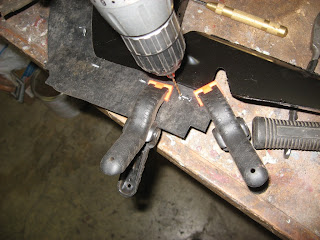 The staple is then placed through the holes. 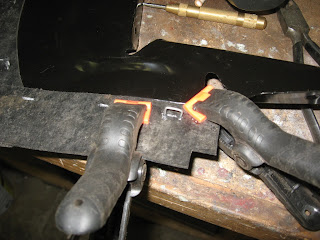 And a pair of dikes is used to bend the ends of the staple over so it doesn't pop out. 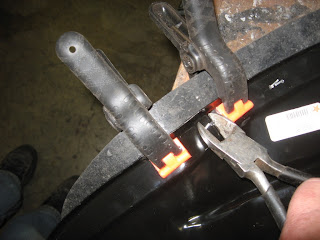 Then pressure is placed on the staple from the other side by pressing it up against an anvil at which time it's ends are tapped down with a hammer or such.  Pressing it like this ensures the staple is tight when it's crimped down. 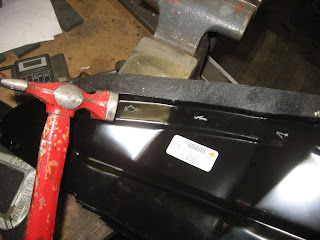 Here's the finished product.  This process really didn't take all that long.  Probably 30 seconds per staple. 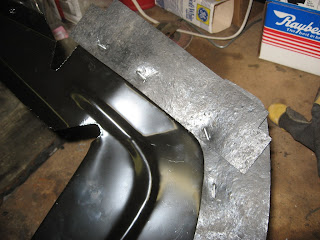 That was just half the job.  Let's not forget their little brothers from the front.  Passenger side: 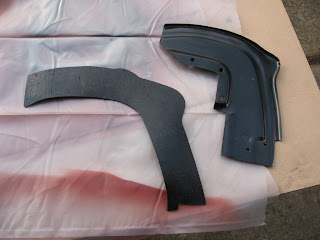 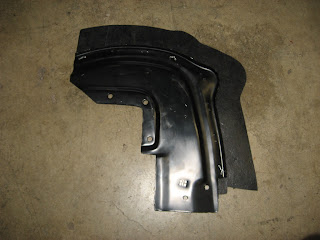 And the driver side (note the longer edge): 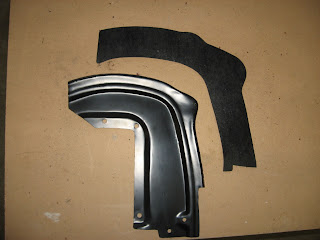 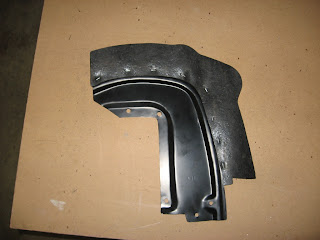 The front shields needed to be installed directly onto the fender headlight bucket (excuse the dusty parts).  First the position is determined by aligning the rubber strip plastic clip holes with the headlight bucket and then the sheet metal screw holes are marked: 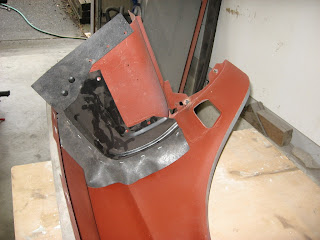 The marked holes (white) are then center punched and drilled: 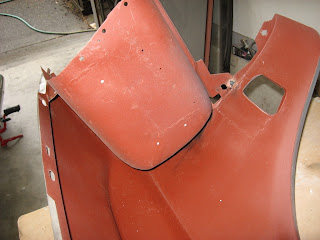 Finally, the sheet metal screws are driven in and the plastic clips are inserted and locked.  Regarding these little plastic clips, they aren't available as repro items from the regular Mustang parts suppliers.  In fact, I called NPD and the guy acted like I was crazy for asking.  I started a thread on the VMF though and got some sources for the actual original style clips.  Check that thread here.  I had originally planned to buy the original clips but put it off and then didn't remember that I'd needed them until I got to this point so I ran to NAPA with a caliper and found the clips shown below as Balkamp part number 665-1388 (Push Type Rivets) that matched the holes perfectly: 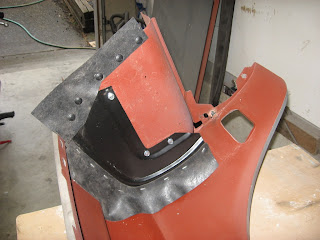 Now, came time to install the rear splash guards.  These don't actually go on the fender itself but on the side cowl of the car.  I had to trim the shields in a couple of places to get them to fit where they were designed to go.  The lower fender mount brackets were no exception.  This is how I understand they are to be installed between the shield and the torque box flange.  Note how the hole doesn't line up.  I had to trim about 3/32 from the side of the shield to make room for that vertical bend in the bracket: 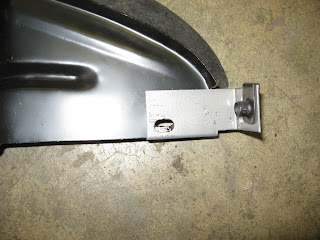 Here's how I'm 95% sure it's supposed to be mounted between the shield and the torque box flange.  The problem is that the lower horizontal portion of the L bracket is about 1/2" away from the lower rocker flange and my fender edge wants to sit right up against the rocker flange: 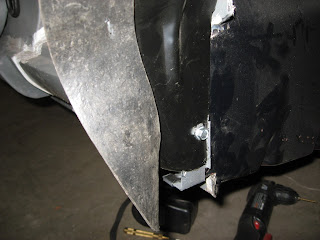 The "correct" mounting of the bracket from the mounting side.  Note that a notch had to be cut in the bottom 1" or so of the torque box flange to allow the bottom of this bracket to come through. 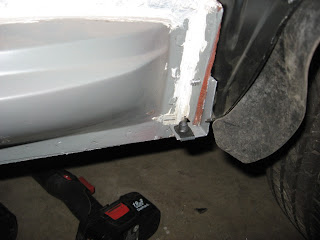 I always have to be different though so I hammered the little bend out of the driver side bracket which allowed it to be screwed right up next to the lower flange of the rocker so it would fit my fender better: 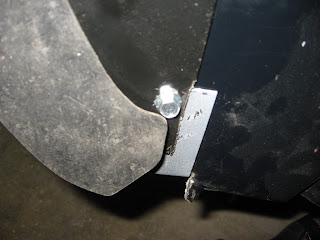 From the business side showing the hammered out bend sticking out to the side: 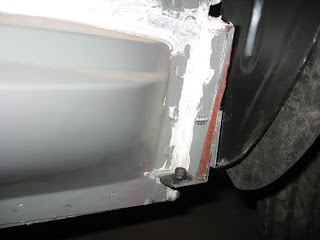 This is a side-view of the installation of the rear splash shield.  There are two sheet metal screws from the side cowl.  Screws are driven out through the cowl side/firewall flange.  There's another sheet metal screw that is driven down through the top of the rear apron into the top of the shield "Z" bend.  The shield mounts to the front of the torque box flange and the fender bracket is sandwiched between the shield and torque box with a single screw driven through all three: 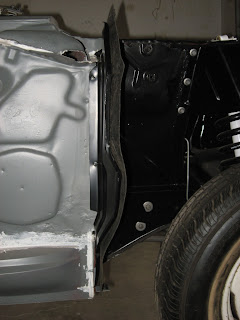 Here's a picture from the inside of the mounted fender looking back toward the top of the rear splash shield: 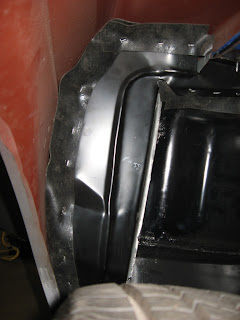 The bottom of the rear splash shield from inside the fender: 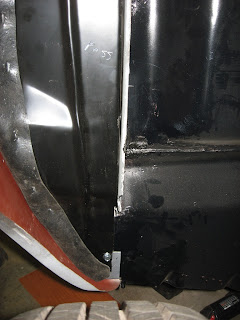 A shot towards the front splash shield from inside the fender: 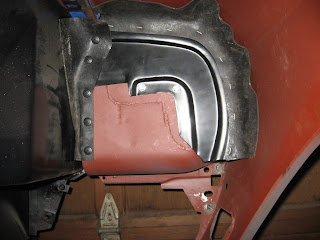