The Doorway to Panel Alignment Part 1

After passing by Ol' Rusty in the garage several dozen times a day and seeing the doors laying there on the floor of the car, I had decided that the best place for the doors is on the car.  I kind of put this off because I was slightly afraid of alignment issues that I might encounter after all of the sheet metal work.  I was subconsciously afraid that my inner rockers were crooked, or that I had permanently welded in some kind of bow in the middle of the car and that the doors wouldn't fit.  Neurotic, I know, but it came time to find out sooner than later.  Anyway, all future panel alignment was dependent upon the doors.  Actually, they're dependant upon the rear quarters and outer rockers and how they form the door openings so the doors are actually the second most important but also one of the most adjustable which is what makes hanging the doors such a hassle.

I had found several references on hanging doors.  One of the most helpful was from Average Joe Restoration.  Another site is HotRod Magazine's guide to paint and body Part 5 - Panel Alignment.

Those two sites give excellent step by step panel alignment instructions so my purpose here is to simply relay my personal experiences with door alignment.  First things first, I was doing this solo and needed a helper to hold the door while I put the screws in the hinges.   The door striker seemed like a likely candidate so I cleaned it up and screwed it loosely to the B pillar. 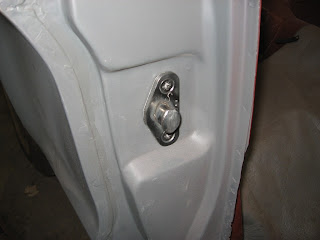 But to hang a door you need hinges.  On a previous evening, I had media blasted all of the hinges, screws, and hardware and gave them all coats of primer and paint.  Flat black for the hinges and stainless steel for the mounting plates and screws. 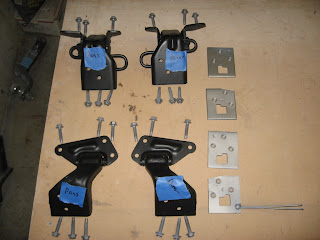 I then bolted the hinges to the doors loosely.  Alignment of the hinges doesn't matter at this point. 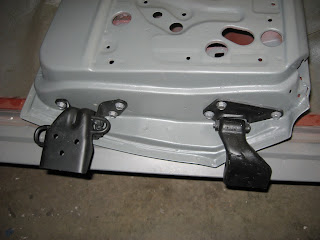 Also, the doors need something to hold onto the striker with so I dug around my parts until I found the old door latch 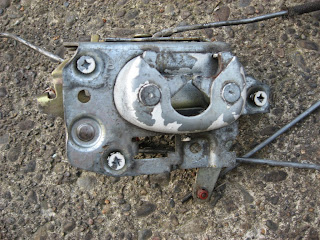 And then cleaned it up a bit. 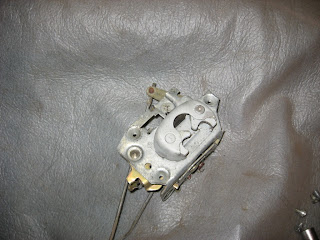 And mounted it in the door. 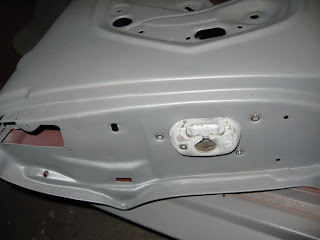 The inner door hinge mounting plates were positioned in the A pillar and then the door could be lifted (it's not too heavy since the windows aren't in it) into position and latched onto the door striker.  This supports the door on the rocker until you can get the bolts through the hinges into the mounting plates. 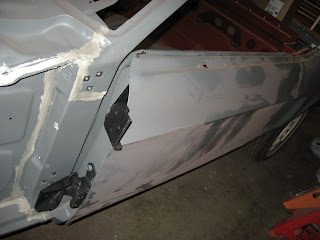 I think there are a dozen ways to do the next steps but I just left all of the hinge bolts slightly loose and let the door hang. 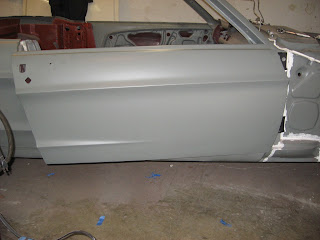 The lower door gap needs to be set first and many people swear by using paint stirrer sticks.  I went with some 3/16 panel I had laying around and cut a couple of strips and carefully lifted the doors weight off the hinges and set it on the sticks to see where the door sat. 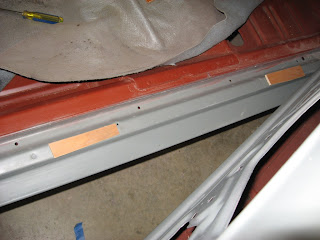 After some fiddling around with it a few times, I had to use some popsicle sticks on top of the main shims and taped them all to the rocker to help keep them in place while I adjust the door forward and back.  The gap between the door and the rocker has to be a happy medium between the lower door gap being uniform all the way across and the outer rocker and the top of the door aligns with the top of the rear quarter and the accent lines at the top and bottom of the scoop line up. 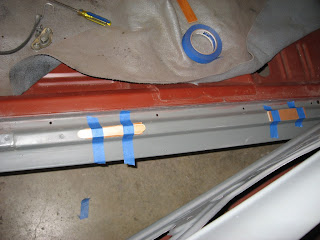 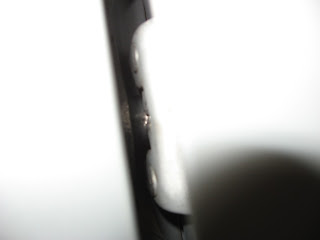 This is pretty close but the door is adjusted all the way back as far as it can go and there's still about a 1/4" gap between it and the B pillar.  Some have suggested wallowing out the hole for the hinges on the A pillar to allow it to move back further but since the front of the door also has to align with the back of the front fender I think I'm going to weld a 1/8" rod along the back of the door (and possibly the bottom) to reduce the gaps.  Either that or I'm just going to get impatient and leave it like it is.  We'll see. 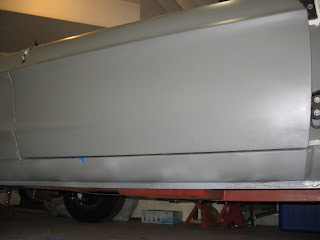 Now, an aligned door isn't any good without fenders to align to and those can't be aligned without a hood and both of those need work so it will be awhile before I finish the alignment of the panels.
Posted by A. Olshove at 12:08 PM