The past couple of weekends, I've been going to shows.  Last weekend it was the huge Portland Swap Meet and this week is the Portland Roadster Show.  So, obviously, I'm not getting any real work done on the Mustang but today was turned out be kind of special so I thought I'd share.  I'd like to apologize for the poor quality of the images but I forgot my camera and all I had was my cell phone.  Bleh!

There were some really sweet rides like this 68 GT-350 resto-mod.  This car was amazing in the details and quality of workmanship.  Things like the Cobra emblem that's embossed into the sheet metal on the side of the car, the pearlescent white with metallic blue rally stripes, and many other touches.  It was while looking at this car that I met one of the members of The Mustang Wranglers Mustang club, a regional chapter of the Mustang Club of America of which I'm also a member.  I've always intended to join a local club but meeting this guy kind of solidified it.  I'll be checking it out next week.

There were many many awesome show cars there but this is one of my favorite super cars.  The Ford GT. 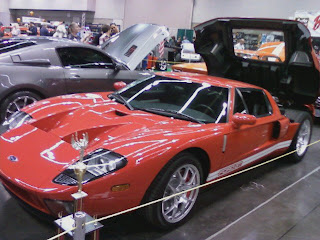 And, of course, the ubiquitous "Eleanor". 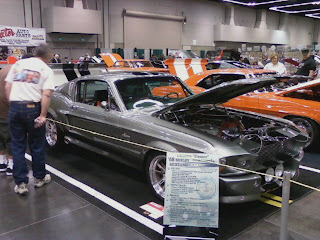 I found "The Wolfman" signing autographs.  Back from the grave?

Next I found a really long line so I did the only natural thing a person in the big city can do when they encounter a line... stand in it. 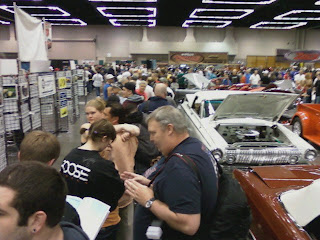 At the end of the line I found this guy.  Yeah that's me on the right.  I'm the blonde guy... no wait, that's Chip Foose from a show called OverHaulin.  The other guy must be me. 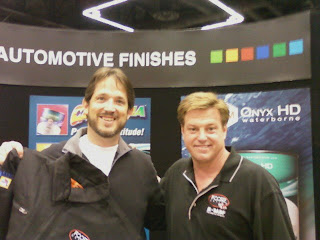 There's a little side story here.  You see, Chip is a really nice guy.  He was quiet, and just busy jamming out signatures and pictures as fast as possible but he still took the time to cut ALL the kids into the front of the line first so they came and grabbed my daughter and my wife went along to be with her and I continued to stay in line because we really weren't sure what was going on.  About 20 minutes later, my wife and daughter came back with signed posters and told me that Chip had already signed a poster for me and that I was supposed to go on up and get it and meet him.  Well, I hummed and hawed, feeling really uncomfortable about it and then finally went up with my daughter to see if they'd let me in and the security guys around him pretty much told me to get back in line so I did.  3 hours later I got up and the gal that was taking pictures for him said, That's ALEX and I was all like... what?  Who? Me?  She recognized my wife and daughter and remembered my name and said "Come on up!" and I said, "Ha! I'm good, I'm almost there... thanks!".  I waited another 20 mins or so and got up there and she and the manager said, "It's Alex!" and I was pretty much just floored to be singled out.  The manager said, "Since you were such a patient guy and waited in line for 3 hours after Chip told you to come up, what size are you?".  I said "XL" and they whipped out a sweet jacket and Chip did a drawing and signed the back and I was completely in shock like I'd won the Lotto.

Here's the front of the jacket. 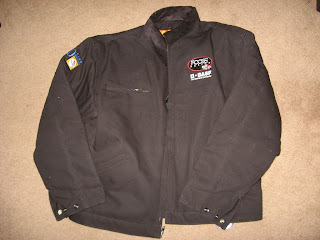 And the back with a Foose pickup truck that he sketched while I was standing there.  I wasn't about to request a Mustang at this point. LOL! 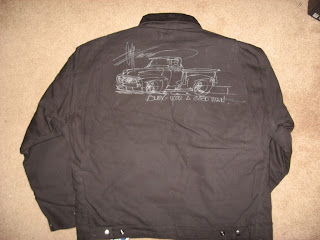 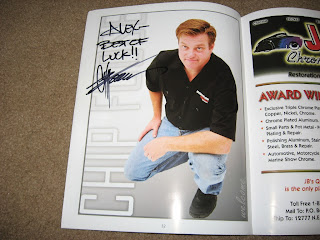 And a poster.  Plus a poster for my wife and one for my daughter.  Awesome guy! 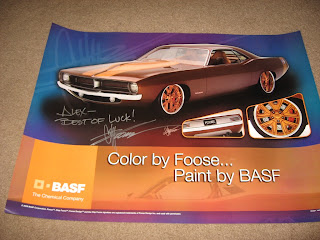 So, it was a great day and this is NOT an April Fools joke.
Posted by A. Olshove at 9:04 PM