The leaf springs and rear differential are out of the way so now the real work can begin. The back-end of this car looks... well... terrible. The scale rust is pretty bad but hasn't gone so far as to be cancerous. I was pretty fair with my determination to stab a philips screwdriver through the panels and although I found some thin spots near the trunk drop-offs (I'll show you those later), the metal really wasn't deteriorated to a point of failure. If it were worse than this... if there had been evident cancer, I honestly would have gone to the trouble of replacing the shock mount reinforcement panel shown here: 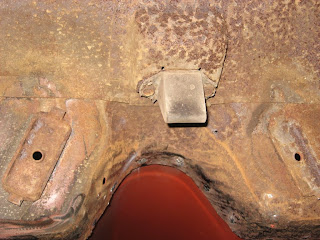 Instead, I opted for the stainless steel wire knot cup-brush with 5/8" arbor that screws onto my angle grinder. I set to work and was soon literally engulfed in a cloud of rust and was pretty thankful for the respirator I was wearing. The cup brush lets me get into the grooves and follow the contours of the panel. The stainless steel wire cuts the rust pretty nicely and gets into pits left by the rust damage. I then followed up the task with a poly-abrasive stripping disc that also attached to my angle grinder. This did a surprisingly good job of getting down to bare metal. 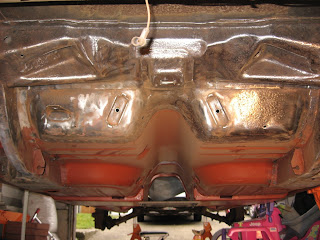 After I was satisfied with the job; that is, exhausted after holding the angle grinder over my head for over an hour; I sprayed the area down with Ospho rust converter. This will later be rinsed, roughed, wiped down with varnish remover, and then encapsulated with ZeroRust. I'll admit right here and now that this task would have been better performed by a media blaster and if I had a readily available car hauler I would have welded a dolly to support the rear end and had it done but there's a certain budget I'm attempting to maintain so this is going to have to be the good-nuff level of this task. 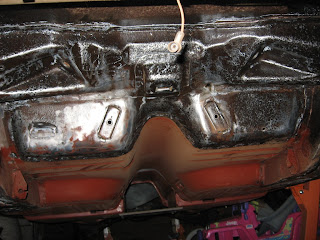 So now, just so you don't think me too cheap and lazy, I'll show you the areas of the car that I did feel needed to be replaced. Firstly, there's a rust hole in the lower rear quarter and wheel well. 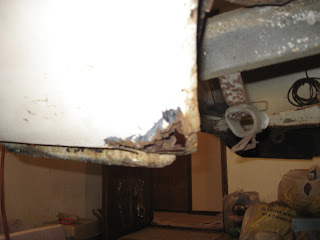 Secondly, the drop-off on the passenger side of the car has cancer at the bottom... 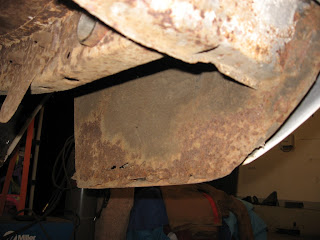 And third, there's cancer in the inside ridge of the trunk floor where it descends to the gas tank hole. You can see it on the left side of picture just below the wheel well. 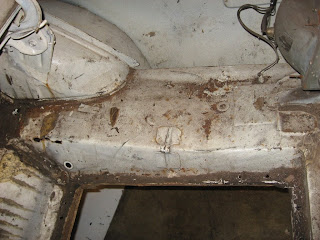 Now the metal of the trunk floor is fairly thin, about 20 - 22 gauge and doesn't lend itself to even minor pitting like the heavier metal of the shock absorber mounting panel seen above can. Each side of the trunk floor (passenger and driver) can be replaced as single panels available from reproduction supplier and I've purchased both sides.

But first, I need to get a couple of things out of the way. The first is the rear tail light module. This is easily popped out by removing the nuts from the 6 long screws seen here. The entire assembly pops out in one piece, lens and all. 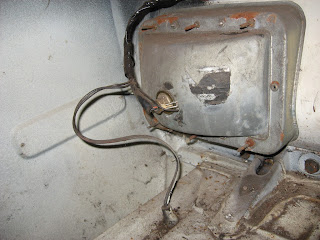 Secondly, there's a bumper mounting bracket that ties the trunk floor to the rear taillight panel. Unfortunately, this is welded to both the trunk floor and the tail light panel and so the welds need to be cut. Here you can see the position of this bracket on the floor that I've ground down to expose the many spot welds. 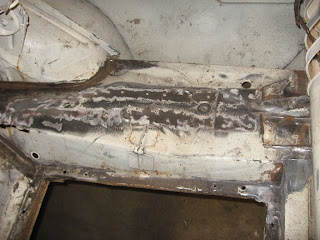 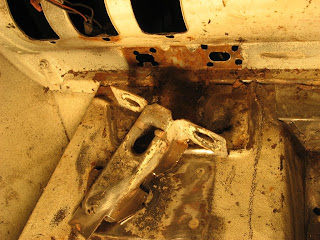 So now the gazillion spot welds can be drilled out... (my personal recommendation is the Blair Premium Spot Weld Cutter). 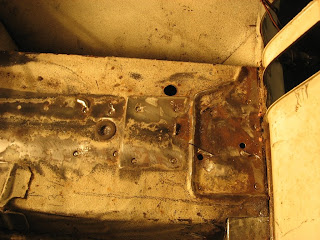 No sense wasting time taking out old sheet metal carefully, I cut it where I needed to so I could peel it out the quickest. 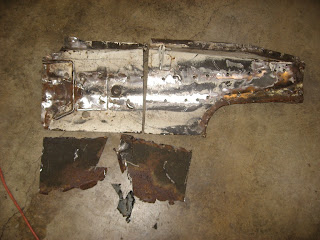 Here's the rear frame rail after I cut out the old floor panel... and... oops... a slice in the frame rail flange. No worries, I'll weld that back up before I put the new panel in. 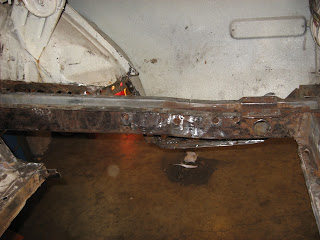 One of the reasons I chose to replace the entire panel is so that I could check the insides of the rear frame rails and treat them. I treated the exposed metal to the same stainless steel brush and abrasive wheel that the bottom had gotten earlier. I then converted the inside and outside surfaces with Ospho. 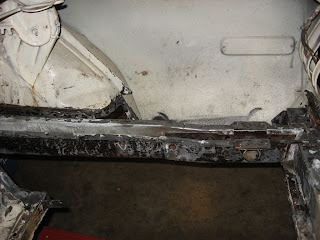 And Finally, coated the surfaces that would be forever closed-in by the new trunk panel with ZeroRust encapsulator. I didn't do the exposed surfaces at this time because I'll be coating the entire trunk bottom area a little differently as one large task. 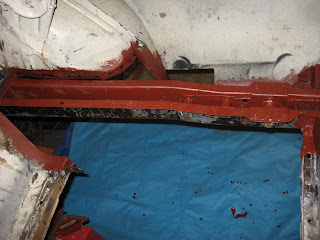