I've got an little problem with my rear-end, you see, it's all brown, flaky, and makes embarrasing squeaking noises. I'm speaking about, of course, the junk beneath my trunk. The area under the trunk at the back of the car was not spared the destructive salt of the NorthEast winters. Fortunately, it's not so bad that it's become cancerous, and although the frame rails are pitted, they still have plenty of meat left to them and can be saved. My plan of action is to grind off the flake rust and treat the problem with Ospho and ZeroRust.

Before I could begin that phase, however, I needed to remove the rear differential because, A) it's in the way, and B) it's ugly too, and C) the leaf springs that hold it in place are rusted pretty badly and their spring has sprung.

The first task at hand was to remove the shock absorbers. These were held on by 2 nuts, 1 accessible from below the shock and spring plate, and the other was accessible from access holes in the rear seat back. The problem with removing shocks was that they tend to spin when you try to loosen the bolts. I solved this by holding the shock housing with a pipe wrench.

Here's a shot of the spring and shock mount plate. This holds the differential to the springs via U-bolts and provides a lower mounting point for the shock. You can see that the differential is resting on jack stands. I tried to adjust the jack stands to provide support but put as little tension on the leaf springs as possible. 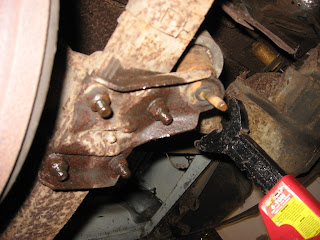 This is a shot from above the differential tube showing how the U-Bolts attach to the shock and spring mount plate. 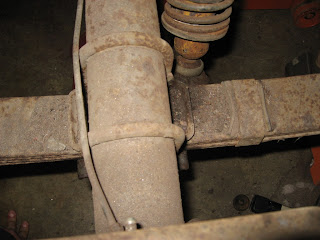 After the shock and 4 big U-bolt nuts were removed, the differential was pretty much free to move about the cabin so I jacked it up slightly higher, readjusted the jack stands, and moved it a bit forward to get it out of the way while I removed the rear shackles (which came out easily since they are mounted in rubber bushings). I then moved the differential/jack stands back as far as I could to allow me as much room as possible to work on the front spring mounting bolts. I supported the spring with a nylon strap so that it wouldn't fall on me when I removed the spring mounting bolts. 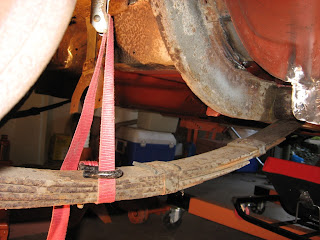 Here's a shot of the rear differential suspended on jack stands. I could have man-handled it down and out, but lacking a good way to balance it on my floor jack and maneuvering it out the rear and then sideways, I decided to leave it for the time being until the springs were out. 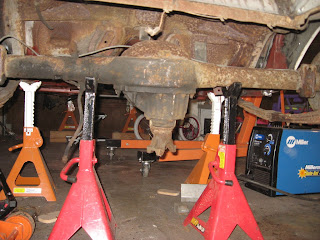 So, the question bouncing around in your head by now might be something like, "Why did you need so much room? Why was removing 1 simple, solitary bolt such a big deal? Why do I smell like fish?" The answer to the first 2 questions is that the god*!&!, mother@#*!), piece of s&@! was rusted into the hardened steel sleeve in the rubber bushing and no amount of pounding, cursing, coaxing, or clever devices was about to remove them.

In all honesty though, there are several methods to remove these sumbishes depending on the tools at your disposal. One popular method that has worked for many others is to make a pressing tool out of some readily available parts from Home Depot. This method didn't work for me because the convertible inner rocker only allows about 1/2" of working space to the end of the bolt. You could cut the bolt to gain some room of course. This thread on the Vintage Mustang Forums is also helpful and the entry regarding using a Tungsten Carbide sawzall blade was my method of choice. Why Tungsten? Because the sleeves into which the bolts are rusted happen to be hardened. I learned this with the quick demise of 2 innocent bi-metal blades, may they rest in peace and Tungsten blades are pretty much the only thing short of a torch that will cut them. After about an hour per side of cutting, resting, cutting some more, and then resting some more I got 2 things; I got the bolts cut and I got a new respect for people that cut through jail bars with a butter knife.

This is a shot of the tungsten blades and the spring they conquered! 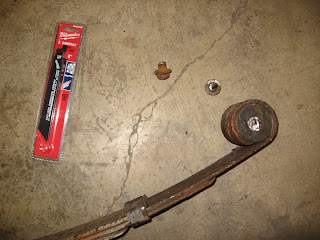 Here's what holds up the back end of the spring. See? Bolts through rubber bushings, no rusting involved and easy to remove. Ah... the good old days. 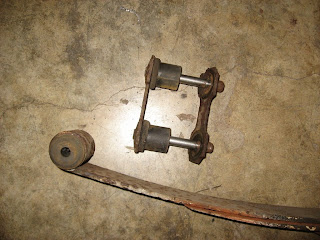 Here's a little problem waiting to happen that I uncovered. There's a big crack in each of the shock and spring mounting plates. That can't be good. 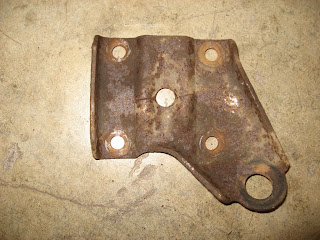 After I removed the springs, I lowered the jack stands and slid the stands and differential out the passenger side wheel well and then moved the differential to it's new home outside, wrapped snugly under a tarp. 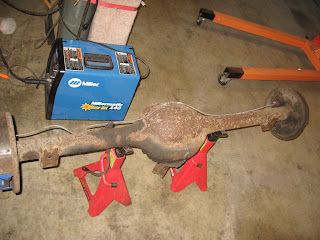