It's been awhile since I last posted an entry. This is mostly because it's winter and I hate winter and would rather hibernate than doing anything productive. Sure, I've got loads of excuses such as "The house furnace is in the garage so I can't generate noxious fumes or I might kill the family", or "I don't want to scare the pack of badgers hibernating under the dashboard".

I've pledged to myself, however, that I will crawl back under the car to finish grinding the spot welds on the new floor when the temperature reaches 50 degrees.

However, this doesn't mean that I can't do other stuff. One thing I found to do was to buy a dash clock. I don't like that blank spot between the speedo and gauges so I decided to fill it. Tachs are great for racing but I'm a cruising and commuting kind of guy so I wanted a clock. A kind gent in a town to the North met me in a McDonald's parking lot and traded me two $20's and a $10 (you do the math) for a clock out of a 67. The picture looked good and you can buy quartz conversion kits for them these days so I bought it.

Here's the pic he sent me. The clock looked this good in real life too so I was pretty happy with the purchase. 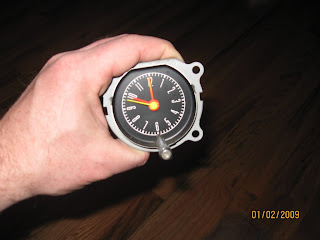 I was a bit disappointed when I attempted to fiddle with the one knob that the clock has and it was really difficult to turn. Rather than force it, I decided that the internals were very dirty and assumed that since it was cold out, the old lubricants were clogging things up. I mean, how bad could it be.... right?

I didn't know anything about how these clocks work but ignorance has never stopped me from taking things apart before soooo...

I got the back off (by undenting 3 divots) and I'm no rocket scientist, nor a horologist for that matter (Horologist: Noun, Someone who makes or repairs watches), but even I could tell something was cuckoo about this clock. This picture is fuzzy but can you spot the first problem? The stack of gears to the left in the movement, which I later discovered to be the winding mechanism is out of it's pivot and tilted all, well, wrong. 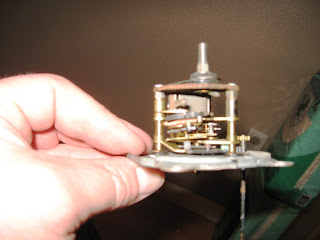 I needed to loosen the top posts to allow the winding assembly to drop back into it's pivot so I needed to first remove the solenoid on the top which was held on by 3 screws. I also discovered a broken contact tab... uh-oh. The tab is laying on the table between the clock movement and the solenoid and belongs on the top of the winding assembly (the stack of gears that was out of whack in the picture above). 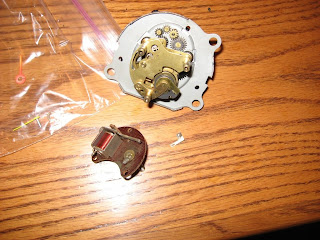 These clocks use a pretty ingenious principal to operate. They are basically just a wind-up clock for which the spring-loaded winder only winds about a half turn at a time. The winder contains a weight and an electrical contact (the broken tab above) . The solenoid's electrical contact remains static but when the winder winds down, the winder contact approaches the solenoid contact and they eventually touch causing the solenoid to fire with enough force to cause the winder to fly back to it's fully wound position (assisted by the mass of the weight attached to the winder). This process is repeated every 2 1/2 minutes or so. This understanding of how these clocks work was an important step towards the frantic realization that this particular clock is a goner without it's winder electrical contact which was now laying forlorn upon my dining room table.

Now, a less cheap person... that is to say, a person who is not me, would simply purchase a quartz movement online, plug it in and call it good. But here I am with a clock already disassembled, a broken $50 clock. Those new quartz movements cost around $70 so stay with me here while I do the math. 50 + 70 = 120! I'm not paying $120 for a clock! I would have just bought an entire, working clock for that with a refurbished face or maybe even a repro tachometer. Have I mentioned that I'm cheap? Okay, okay, it's not all about the money. I also like a challenge (have you seen that 68 convertible I'm working on?)

Before I started to repair the clock, I felt the overwhelming need to clean it first. I didn't want to risk damaging the numbering on the face so I removed the face and it's backing plate first from the movement.

The movement is held on by 3 posts inserted through rubber grommets and fasteners. Here's the movement just after being removed from the face backing plate. The old grommets were brittle and destroyed in the process. The gear on top is the where the clock's hands are mounted. 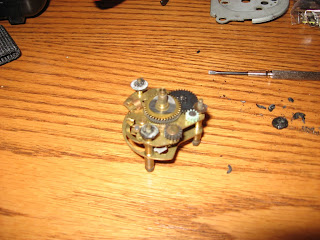 I basically dipped the movement into acetone after first testing the a small amount of acetone on the plastic gears with a Q-Tip. No problem. The movement cleaned up nicely and I finished it off by spraying it lightly with electronic contact cleaner. Radio Shack carries it in a type that includes lubricant.

Before reinstalling the movement on the face backing plate, I needed to replace the 3 rubber grommets. I bought some 1/8" ID x 11/32" OD grommets from a local hardware store that fit perfectly. Here are the grommets installed on the backing plate. 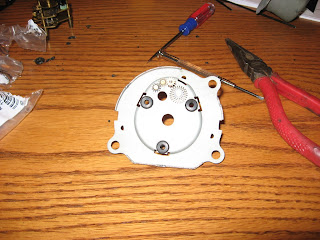 The next task was to get the clock generally running before I went to the trouble of fixing the broken contact. I loosened the 3 posts on the back side of the movement which are threaded and hold the assembly together. I was able to position the winding mechanism back into its pivot points and after some trial and error was able to get the escapement wheel thingy tick-tocking away when the winder was ratcheted to it's wound position.

So, to use this thing in an actual car, I need to get the contact back on the winding weight. I chose to solder the tab back onto the brass plate portion riveted to the top of the weight so I needed to remove the weight from the rest of the clock movement which, sadly, required me to basically break what I had just gotten working. This was a necessary evil if I ever wanted the clock to work beyond 2 1/2 minutes, however.

Here's the back retaining plate popped off and laying next to the now-free winding weight assembly. 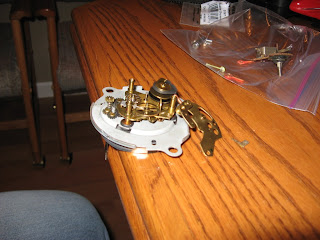 I carefully aligned the broken tab with it's estranged wheel and filled in behind it with solder making use of my Harbor Freight pen torch which came in handy to get the winder weight assembly hot enough to flow the solder well. The last thing I wanted while the contact was being pummeled by the solenoid was for the tab to pop off again. I filled solder in behind the contact to provide structural reinforcement, kind of like a gusset. 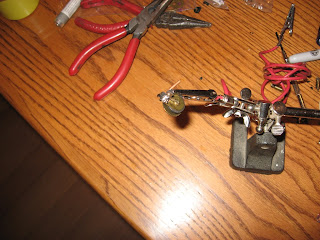 I then reassembled the movement with it's repaired winder contact. It's hard to give advice here since there's so much you have to ensure is back in it's correct position. However, the most important things to check are that the winder's ratchet spring is loaded against the ratcheting gear and that the balance wheel spring is not loaded to either side (i.e. - it's balanced) and is in contact with the escapement lever. 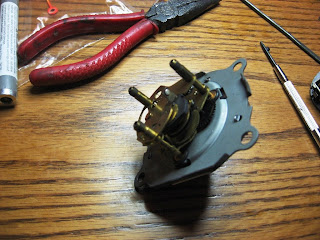 The next thing to do was to reinstall the solenoid board. It had a nasty 41-year-old rubber washer that separated the positive and ground but holds the ground tab against the casing so I removed it and replaced it with a rubber grommet that I had cut off one side of to make a similar stepped rubber insulator.

I wound the winder, attached an old 12V laptop power supply and waited for the winder to wind down and contact the solenoid. CLICK! The solenoid slapped that winder back to it's full extent and has been doing so every couple of minutes for the past several hours.

You can see the contacts at the back of the clock next to the alligator clip on the circuit board. The winding weight rotates counter-clockwise (facing the .. um.. face) and brings it's contact (the lower contact) toward the solenoid contact (the upper contact). You can't see it in this picture, but there's a speed control on the other side of the movement that contacts the spring of the balance wheel. Moving the adjustment one way or the other makes the clock speed up or slow down slightly to allow for calibration. 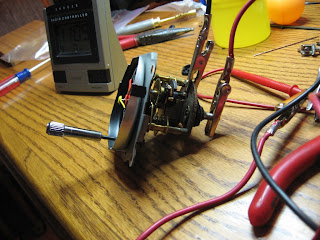 After I finish calibrating, I'll put the back back on, paint the hands, and box the clock to be installed in Ol' Rusty sometime early this Summer (I hope).

Update 1/13/2009: I've calibrated the clock to within 5 seconds every 12 hours and put the back casing back on. As a last note, these clocks have a self-adjusting mechanism in them. Once you get them calibrated close using the internal speed lever, you can just adjust the time using the adjusting knob. Setting the clock forward speeds it up and setting it back slows it down.
Posted by A. Olshove at 10:20 PM