About a thousand years ago there was a thing I used to do, it involved a car, a welder, and a dream-like delirium induced by blood loss and rust inhibitor fumes. Oh yeah! I was restoring a 1968 Ford Mustang convertible!

Well, I'm back at it and when I left off, I had welded a new floor into the beast. Part of my absence was due to cold weather but the real catalyst for procrastination was the prospect of grinding 200 welds. I finally suffered enough cabin fever that even weld-grinding seemed like fun so out I went into the cold, dark, confines of my little garage and set to work. I began by grinding the welds on the top side and then... well... more procrastination because the prospect of grinding the bottom of the floor was even less palatable than grinding the top since it involves me laying on my poorly functioning creeper. So, another two weeks of inactivity flew by before I was again bored enough to continue but continue I did... after I bought a new creeper from Harbor Freight with an adjustable head rest!

I started by grinding the main part of the welds down with my trusty 4.5" angle grinder with the edge of a grinding wheel. This shows the rough grind in comparison to the untouched welds. 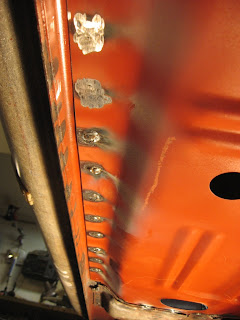 This is the grinding wheel used for the first step: 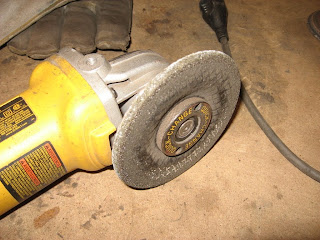 This is my alien disguise that I wear for Halloween and grinding welds. I always wear face shield, ear protection, and a respirator when grinding because even something as benign as grinding produces potentially harmful fumes. Not from the metal per-se but rather from the grinding disks themselves. Also, primers, sealers, etc that may be vaporized during grinding make me sneeze up some nasty stuff many hours after finishing work if I don't wear a respirator. 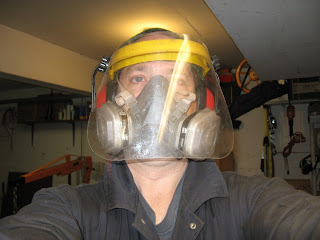 After I finish the first, rough grind, small holes were exposed where I didn't quite touch one side of the plug weld hole or a gas bubble had formed so I needed to touch up the welds. Again, I wear breathing protection. This particular mask contains charcoal filters and although it isn't as good as my primary respirator, it does an adequate job of filtering the smoke and vapors generated during welding and it fits under my welding helmet. 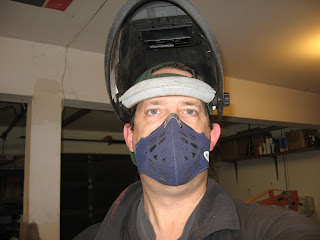 Next, I clean up the touch-up welds with a 24 grit flap disk wheel which also is aggressive enough to smooth out the grinding disk gouges. 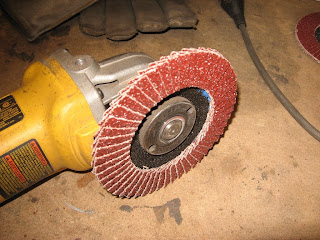 And finally, I follow up with an 60 grid flap disk. This is as smooth as I bother to take the welds. 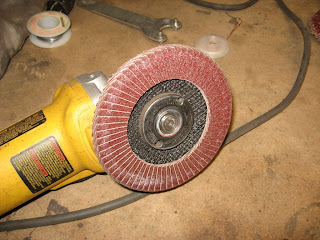 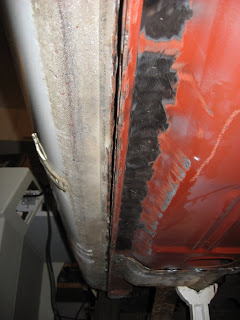 Followed up by a coat of primer. In this case, I only covered the exposed metal over which I intend to install the lower seat reinforcement pans since I intend to do a fairly extensive re-prime of all of the freshly-ground welds. This area, however, was going to be covered permanently when I weld in the new reinforcement panels so it needs to be protected now. 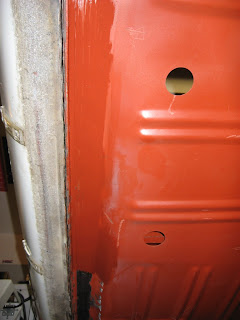 Finally, I'm ready to test fit the lower reinforcements. I placed each one in position individually and then bolted on the cross-tunnel plate an supported the back end with a floor jack. The front end is supported by a flange that tucks between the floor and the front floor support rail. 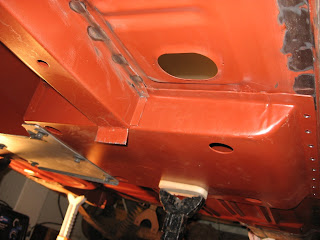 A close-up of where the reinforcment flange tucks under the front floor support rail. Note that the rear inch or so of the front floor supports have to be cut to be allowed to drop down under the reinforcement panel flange. This is much simpler to do BEFORE the floor is installed. I did this correctly on the passenger side but forgot to do the driver side so my reward was carefully cutting this flange laying on my back with the car's floor interferring with the angle grinder but I got 'er done. 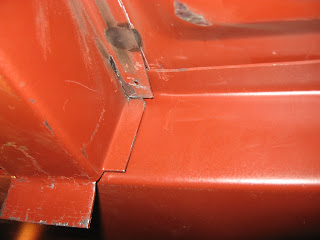 After I had gotten the lower seat reinforcements fitted in their correct position, I was going through some old reference pictures I had taken just to make sure I had the cross-plate on correctly and discovered something was missing; the slots for the emergency brake lines! The e-brake cables are supposed to pass through the lower seat reinforcements. I was a little miffed because if I had gone ahead and welded in the reinforcements, I probably wouldn't have noticed the missing slots until the car was nearly reassembled and it came time to install the e-Brake cables!

I'm happy that I dodged that bullet though. I went out to my pile of rusty metal and recovered the old lower reinforcements. I had cut them up to remove them but enough was left to make measurements which I transferred to the new reinforcements. 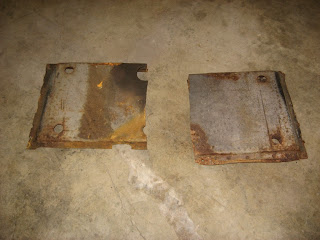 I then used an angle grinder cutting disk, jig saw, and 1/2" drill to make the various slots. 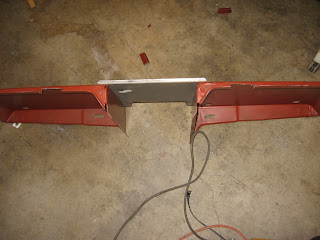 Next, I re-fitted the lower seat reinforcements into position and soon decided that I didn't like using jack stands to support them so I stole an idea from another VMFer who was restoring another 68 convertible. He suggested I hold the lower reinforcments up using long bolts and fender washers (thanks yelostang!). Since I had no fender washers, I improvised by using 1/4" plastic plate that I had cut into 2"x2" squares with holes in the center. I think it's good because the plastic won't scratch the primer plus they can be tightened and yet still give when I smack the reinforcments with a dead-blow mallet for that oh-so-precise adjustment. 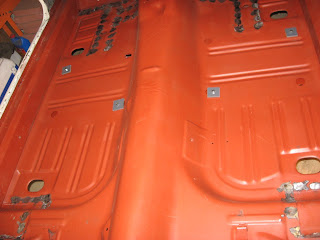 Here's a shot of the clamps from the bottom. 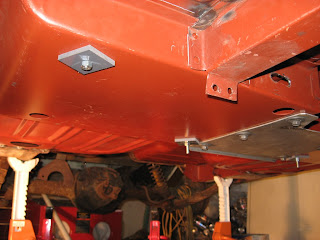 Having the reinforcements in position, I then used a white grease pen to mark the outside edge of the various flanges on both sides. I then marked reference points at either end of each flange offset 1/2" in to represent the center of the flange. Then I drilled 1/8" holes at each point. 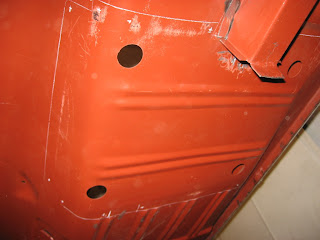 Why did I drill 1/8" holes at the ends of each flange for the lower seat reinforcements? Because I'm lazy of course! I don't want to lay on my back to weld so I want to drill plug weld holes in the floor and weld down into the reinforcement flanges. But how do we know where to drill the plug weld holes? Well, I could just drill them all up from the bottom but see above statement regarding my lazyness. I want to drill the majority of plug weld holes down on the floor as well. So, the 1/8" holes were reference points between which Icould use a white grease pencil to draw reference lines which represent the approximate center of each of the lower reinforcement flanges. 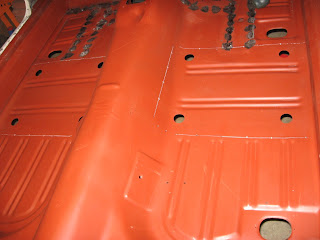 Finally, I marked every 3 inches along the lines and drilled my obligatory 3/8" plug weld holes with my favorite Blair Premium Spot Weld Cutter (god, I love that thing). 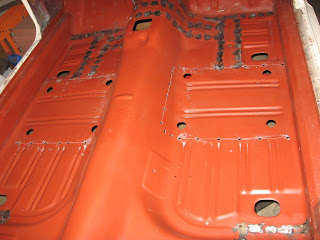 Wow, this was a loooooong blog entry but that's what you get when I procrastinate and spread a relatively simple task over as long a period as I can. Next I need to weld in the reinforcements.