Flash back to 1968; Cruising down Main Street on a Friday night, your steady riding shotgun.  You reach down and flip the radio knob on.  The radio window begins to glow eerily and the speaker in the center dash comes to life with a short hiss of static.  You punch each of the big, black tuning buttons in turn; news... nope, talk show... nope, country... not tonight, but finally, the gravelly voice of Wolfman Jack announcing the latest Top Forty hit, Hey Jude... yeah that's the ticket.  You chance a sidelong look at your passenger who's checking her face in a compact mirror, silently singing along with McCartney.

Sorry, but this is a bit TOO retro for my tastes.  I'm sure that there are many many people in the world perfectly happy with the state of the AM band but, sadly, I'm not one of them.  For the past couple of years, I've been looking for a stereo system that will fit in my console without cutting it while looking the part of a classic radio (chrome!).  There were a couple of systems but none would admit to fitting a 68 Mustang padded console.  I had considered simply buying a radio and hiding it in the glove box or back in the trunk.  This can, and has been, done with great success and there are dozens of posts on the VMF on just that subject.  The problem I had with this is that the wiring for the speaker's would all have to be relocated to radio's hiding place.  I didn't want to consume any space in my glove box and I didn't want to run power and speaker leads back to the trunk and likely control leads back to the front.  Finally, I didn't want to put the R&D time in to find the perfect after-market head-unit that supports all of my special needs at a reasonable price.

The second part of the problem were the speakers, or more accurately, THE speaker in the center dash.  One voice coil was great for the monotonic AM era.   These cars were available with door speakers and/or kick panel speakers but this car was not one of them.  From the factory, both of these alternate locations required holes to be cut to house the additional speakers.  Today, there are other options including a modern variant of the kick panel speakers that require no cutting.  This is likely the path I will take in the near future.

However, my solution in the short-term was to install a dual-voice-coil speaker in the dash.  This was the Retro-Sound RetroMod 5x7 DVC speaker.  Even though NPD's description of the speaker says "fits into stock location", it doesn't.  I had to use spacers and get creative with the mounting screws to get it mounted.  Once the speaker was in, I found a device that would allow me to play songs off of an SD card or my iPod (the $59 device from this link).  It worked fine but with some issues that began to annoy me.  The least of which was a requirement of a narrow range of operating voltage right around exactly 12V.  Otherwise, it would shut itself off to protect it's circuitry.  Well, try that when the car is charging at around 14V or at a stop light with all of the lights, heater, and brakes, on at around 11V.   The bottom line is that the thing would only work when the car was moving.  I ordered some cool little voltage regulators to put in-line with it but before I had a chance to install one, I had received an email advertising the RetroSound Model Two for 68 padded console.  I found it at CJ Pony Parts but the price set me aback at $329.  Sure, it has full control and charging for my iPod, which would be nice, but the fact is that I can live without that particular feature.  I was more interested in getting simple Aux input/AM/FM/and SD card support.  The silver lining for this particular cloud was the fact that there's a "Model One" version of the same radio that also supported the 68 padded console.  However, I couldn't find pictures of anybody that had installed one.  Pretty close was a set of pics of a Cougar install.  And a Model Two install for a 68 padded console.  Still, I was sailing for uncharted territory but I decided to take a chance and buy a RetroSound Model One with the padded console bezel and knob kit, all for $203.

I started off by disconnecting the battery and removing the factory AM radio. 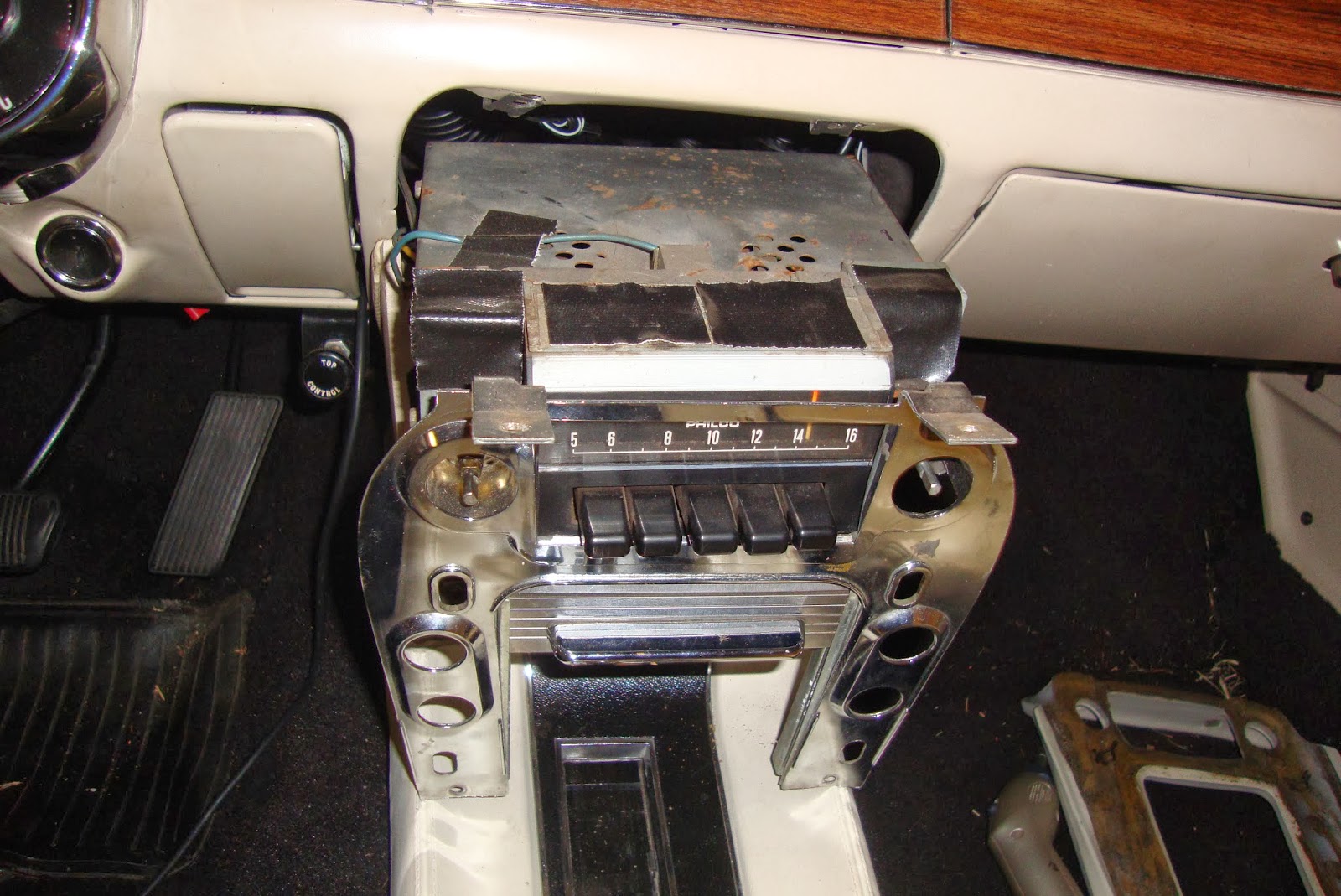 The radio came in a nice little package with instructions, hardware, and harnesses.  The tuning/volume pots are separate units that can be mounted remotely from the main body.  The flexibility and modularity of this system was very impressive.  You could literally mount this thing anywhere.  There were even "professional" instructions for remote-mounting the front control face.  The kit also included a remotely-mountable SD/USB/Aux port and an RF (radio frequency) remote control so you don't have to be in line of sight of the unit to control it.


I decided that I wanted to use classic auto style under-dash connectors.  I found inexpensive flat two-pole connectors on Jegs and ordered 3 pair.  They're meant to be used as trailer hookup extensions but I had other plans for them.  I cut the ends of one of them off and soldered them to the two front speaker leads.  I cut the ends off of another one and soldered them to the wires going to each voice coil of the dash speaker.

One thing to remember about this type of connector is that the source (hot 12V) power always goes to the female side with the receiver of the power going to a male end.  The goal is to never have a hot, exposed male pole that can short out on ground (yes, I'm aware of what I just wrote there... I'm trying to take the high road) .


They call their bracket system "Infini-mount" brackets, theoretically, because they can be mounted in infinite ways... except in a Mustang console that is.  I had originally attempted to mount the brackets to the main unit and then fit it to the console face.  The problem is that the Retrosound's knobs are on the same plane as the control face.  The Mustang console, however, has the knobs at a slightly different angle than the radio face.  This throws the Retrosound's "infini-mount" bracket system out of whack.  My solution was simply to mount the brackets and control pots to the console face first and then align the radio control face and bezel to the console opening.

The mounting screw holes were then marked on the brackets and holes were drilled to match the mounting holes in the side of RetroSound unit.  The brackets had to be trimmed to allow the 4-pole volume/tuning pot connectors to plug into the unit as the bracket's new mounting position interfered.

With the unit securely mounted to the console face, the volume/tuning connectors could be plugged in as could all of the wiring harnesses.  The console face was then returned to it's mounting position in the console after plugging in the speaker leads and guiding the power leads out the back of the console toward the driver's side of the dash.  The ground lead was screwed into the bottom of the dash (I'll have to make a proper grounding block at some point), the 12V switched power lead was plugged into the yellow factory accessory connector, and the antenna's connector was inserted into the radio's plug.


The "constant 12V" lead was a little more complicated though.  This needed to supply power to the radio unit... well.... constantly.  I could just tap into a power lead with some after-market leech-style connectors or run a dedicated line directly to the fuse box but was not keen on either option.  For this project, I just couldn't get the old faithful cigarette lighter out of my head.  I devised a Y-adapter that would let me tap power off of the cigarette lighter without a splice.  I soldered a brass threaded rod into a brass hex spacer and then drilled the threads out of the open end, sliced it down the middle longwise, and slightly squeezed it together to hold onto the threaded pole of the cigarette lighter which is just around .157" diameter.  I then drilled a small hole in the base of the spacer and soldered a female connector lead into it.  Finally, I cut the threaded rod off to 1/2" and wrapped the spacer with insulator thus completing my strange little invention.


The padded front was then snapped over the Retrosound's chrome bezel and the radio knobs were installed and tested to ensure that they rotated completely.  The car's battery was reconnected, the key inserted and....

The sound is marginal due to the single speaker.  Despite it being a Dual Voice Coil speaker, it still leaves MUCH to be desired.  However, it does sound better than the old AM radio and will do the job very temporarily.  Kick panel speakers are already in the schedule.  Heck, I'm just excited to have FM radio again.
Posted by A. Olshove at 11:13 PM