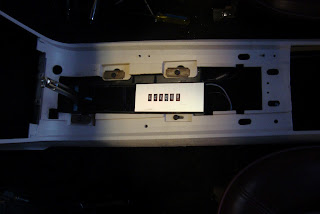 
There's a light inside the "garage door" compartment and two small lights on the back edge of the console that come on when you open the door or turn on the convenience lights with the headlight knob.  It didn't turn out too shabby if I may say so myself.
Posted by A. Olshove at 10:26 PM