Disclaimer: From here on out, you may notice that I'm re-using old, worn or tattered parts (like the various chrome bevels and such).  I'm out of money for new parts to do a full-on restoration but I want to drive the car this Summer so I'm just cleaning up and refurbishing the original parts.  I'll replace less-expensive rubber parts but generally, from here on out, things are going to go pretty fast and, sometimes, ugly.  I intend to budget out some more money this Fall to finish the interior correctly. For now, the name of the game is "git 'er done".

With the electrical system in place, I could begin installing electrical gadgetry.  One of the biggest gadgets under the dash is the windshield wiper assembly consisting of the wiper pivots and the motor and bracket.  The pivots had to go in first and mine were caked in old paint and strip caulk so first I had to clean them up.  I removed the old paint with a wire brush and meticulous use of an xacto knife and peeled away the old strip caulk.  Besides the caulk, the pivots are sealed against the elements with leather gaskets that go between the pivot and the underside of the inner cowl.  I opted for modern rubber seals but first I applied new strip caulk around the screw holes first.  I mounted the pivots to the cowl with three bolts each.


The wiper motor was a mess as well so I took apart the assembly, media blasted the bracket and various parts, cleaned up the motor, and repainted it all.  I then put it all back together and mounted up under the dash by it's four mounting bolts and clipped the pivot actuator arms to the motor swing arm.

Next, I mounted the headlight and ignition switches.  I covered the headlight switch pretty well when I blogged it's removal.  Basically, there's a center barrel that screws into the switch body and pulls the bevel against the dash and the switch body on the other side.  The switch plunger can then just be inserted into the hole and locked in.  Then the wiring harness is plugged in.


The ignition is more simple still.  There's an inner bracket that holds the switch body away from the inside of the dash while the bezel screws into the outside of the dash and pulls the switch body towards the dash.  A screw is then driven up into the bracket from below and the harness connector is plugged into the back of the switch.  There's a special tool for screwing the bezel onto the switch but I don't have one so I used a screw driver to catch one edge of one of the notches and carefully tightened it up.


I next took apart the washer pedal pump and masked off the sensitive areas.  I then media blasted the pedal arm and the bracket.  The pedal pivot was a major pain in the butt to remove and re-insert with the spring and the rest of the assembly was riveted so I opted to mask it off and work around the switch and pump bellows.  The assembly was repainted and mounted back onto the firewall through the insulation pad and it's harness connector reattached. This car never came with the pedal pad so I have one on order.


The driver side vent was yet another adventure in restoration.  The inside of it was the host of a pack rat nest when I tore it apart so the flapper inside was a rusty mess.  I removed the pivot shaft and flapper and carefully removed the rubber seal from around the edge of the flapper and then media blasted the metal parts and repainted them.  I then reinstalled the rubber seal with contact cement.  I used 3/4" foam rubber weather seal around the mounting flange since the original seal was long gone.  The cable was another adventure in that it was broken.  A little research revealed that these plastic cables are horribly designed and prone to self-destruction.  New cables are around $40 each so I opted to employ my old friend "Shoo Goo" and applied it in such a way that it will have to be ground off the bracket if I ever choose to replace this cable with a new factor cable.  I gave the "fix" a fair abuse test and it held up well and showed no signs of letting go of the plastic cable housing nor the metal bracket so I'm just going to go with it... and if anybody has a used one of these cables that's in serviceable condition for around $20 shipped, let me know (but I won't hold my breath).

Next, the emergency brake handle assembly was taken apart, media blasted, and painted and a new handle was installed since my original was broken in half.  A short length of rubber hose was pushed down at an angle in the slot below the steering wheel firewall hole and it was sealed in with some seam sealer.  From the bottom of the car, a new emergency brake cable was mounted to the firewall via two sheet-metal screws through a bracket.  The cable housing was then routed underneath the floor to it's mounting bracket with the cable routed on through the tunnel support and connected to the emergency brake cable actuator.  Under the dash, the cable was linked to the e-brake handle which was then bolted to the firewall on one end and under the dash with the same mounting screws  used for the vent cable knob. 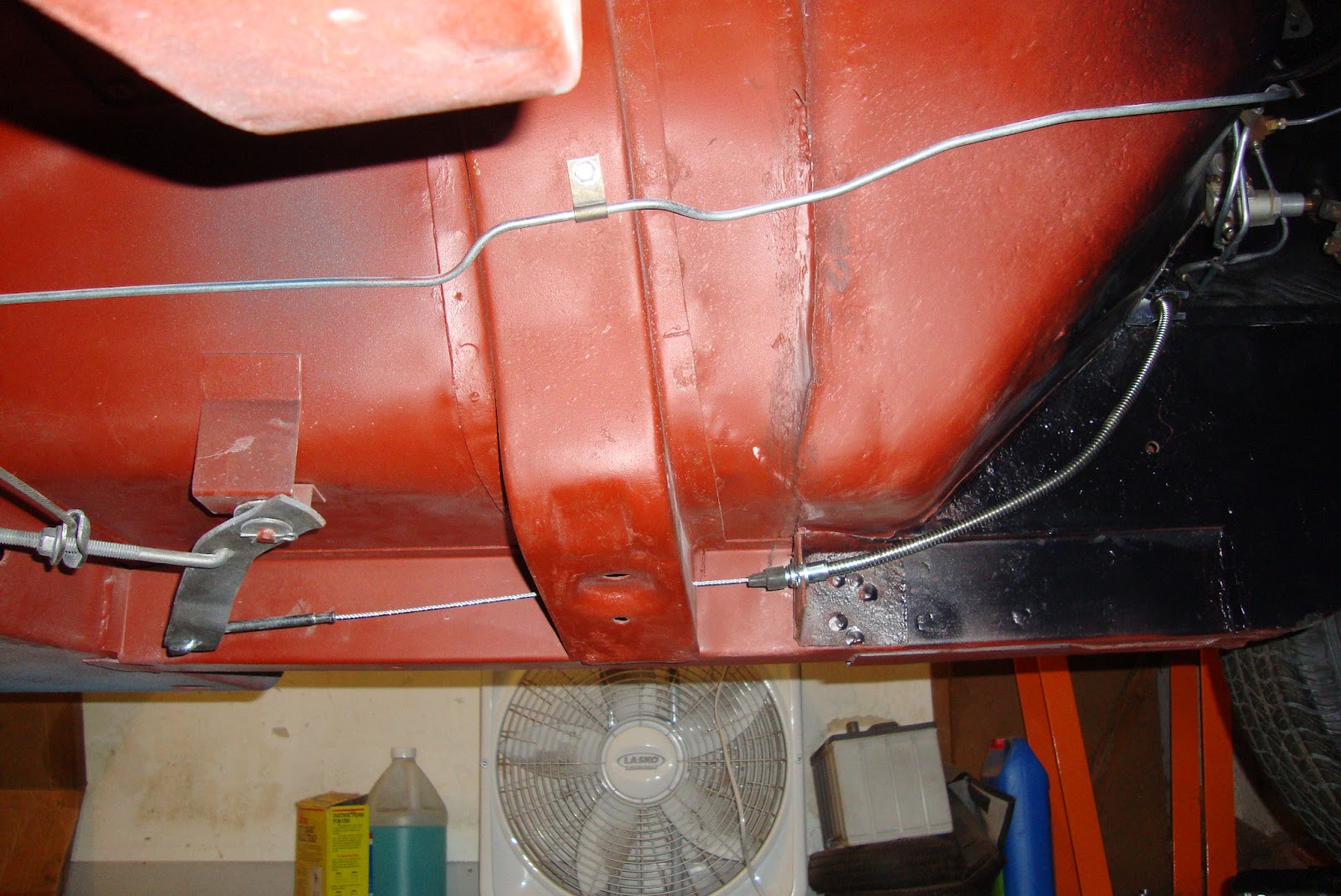