While awaiting parts for under the dash, I decided to move on to an area of the car for which I had most all of the parts I needed already, the rear.

The first task at hand was the quarter extensions that were carefully packed away by Steve when he painted the rest of the car so I unpacked them one at a time and laid them carefully on a foam sheet (that was wrapped around the fuel tank for shipping) and set to preparing them to be returned to the car.

The assembly of the quarter extensions pretty much just involves installing a segment of trim, the mounting studs, and a rubber seal. Installing the studs is pretty straight forward.  There's a rounded end and a flat end.  I screwed the flat end into the extension housing and left the rounded end pointing out, presumably to help start the mounting nuts later.  I ran two of the nuts against each other on the stud and used the top nut to tighten the studs into the housing and then removed the nuts and repeated the procedure on each stud.  My trim was pretty beat up so I bought repro trim which each came with a set of mounting studs and nuts.  The repro trim is very fragile.  It's basically just thin aluminum whereas the original trim is a thicker stainless so if you can salvage your stainless, I'd recommend it instead.  Pressing the plastic stud retainers into the groove in the trim takes quite a bit of force so you have to be careful not to Lenny the heck out of the trim while you're working.  Finally, the rubber strip is fed into its groove and trimmed at the correct length.  The assembled quarter extension could then be aligned with the top and sides of the quarter panel and then a rubber washer, steel washer, and then the nut itself could be tightened onto each stud.  The whole process was repeated for the second extension and then onto the next task.


The next thing I did was to rewire the tail panel for the lights.  I wanted to do this task before the gas tank so I could sit in the gas tank opening.  I ran the original harness across the back of the tail panel, up along the side of the car under the door jam and into the dash area.  The blue wire in the images below are the new 18 gauge 12 V power line run from the driver-side firewall to the passenger side of the tail panel.  You'll have to read on to figure out why I ran this line.

The next part I had decided to install was the fuel tank.  A new tank from CJ Pony Parts with the 20% discount and free shipping only ran about 100 bucks for a kit with a new fuel sender.  I opted not to install the original tank simply because I have no desire to clean all of the varnish, rust, and other contaminants out of it not to mention just generally cleaning up the exterior of the tank to make it look decent again.  Lastly, all the lines between the tank and the freshly rebuilt carb are new and I don't want to risk contaminating them either.

I removed the tank and hardware from it's box, removed the wrapping and immediately had to straighten the corners of the mounting flange as all 4 were bent from shipping.  Also, there was a sheen of oil coating the outside of the tank from the sheet metal press and/or general protection of the steel so I first scrubbed the tank with soap and water followed up with a rub down with wax and grease remover.  After I was sure it was clean of dirt and oil I sprayed the entire tank with a couple of coats of enamel clear coat.  After the clear cured, I installed the new fuel sender.  There's a good article on how to do this on Mustang Monthly web site that applies nicely.

The car's tank opening also required preparation by a thorough cleaning with soap, water, and wax and grease remover.  Finally, I laid down strips of 3M strip caulk around the lip of the opening and around the various bolt holes.  The tank was then dropped in and new screws were driven in.  I was actually surprised that even after my replacing both trunk floors, all of the pre-drilled screw holes lined up perfectly with the new repro fuel tank!  Finally, I clamped a new fuel filler rubber hose onto the top of the tank and fed the filler neck through the hole in the tail panel (don't forget the gasket!) and then clamped it into the rubber filler hose.  It's about now that I discovered that I could only find 2 of the 4 required filler neck mounting screws (the 5th hole is for the fuel cap retaining ring stud) so I ordered a set from CJ Pony Parts (sale was still on) and continued onto the next task.

The next task was the assembly of the tail lights.  Now, normally, this is a task in itself with the two seals, the lens, the light socket, the housing, and 3 bezels per light but that just wasn't complex enough for me so I went out and bought a Scott Drake sequential tail light system.  If you're expecting the latest, greatest LED technology here, you'd better look elsewhere because this boy is on a budget and the LED system was a good 50 bucks more (when I bought it anyway, looks like it's only $30 more now).   I'm okay with this lower tech option though because LED is just a little too high tech for this car.   LED lights are very noticeable in that their brightness and color are off from all the other lights on the car and they tend to be instant on and off which I generally like... for newer cars.  But for this old girl I like the thought of the bulbs lighting and cooling as they sequence giving the sequence a kind of analog "flow" rather than a digital 1 / 0 look

A little side story: My tail light housings were both rusted out with the lower rear lips eaten by cancer so I was bummed when I found that that new repro housings cost about $40 each.  I checked eBay and couldn't find any good used ones for a reasonable price and just by chance I checked Craigslist and a guy in a neighboring town a couple miles away had a set (a pair!) for $15.  I immediately called him and arranged a meeting.  I met him the next day and was floored by the great condition they were in and noted the Fomoco stamp.  I gave him $20 and scampered happily back to my shop with my new housings.  What a deal!

The lights came in a very "do it yourself" box of parts.  I guess I'm just happy I didn't have to solder the control boxes together for this particular project.  Each reflector assembly was partitioned into three sections each containing an 1157 bulb. The wiring harness for each side had to be constructed per the instructions.  The kit came with crimp-on connectors but I always have to over-complicate things so I opted to solder all of the connections with the exception of the control box connectors and the interface between the new harness and the original Mustang tail light harness.  Three of the common wires from the reflector insert went to the original tail light wire while the remaining three wires went into the control box via the supplied control harness.  Three remaining wires from the control harness went to power (a special 12V line had to be run from the firewall back to the tail lights), ground, and the turn signal line.  The reflector assembly was placed into the original tail light housing and the wires were fed through a provided grommet.

Now, these kits aren't without a certain element of danger.  The seal that goes between the lens and taillight housing needs to be thicker than the stock seal to place distance between the 1157 bulbs and the lens to prevent the lens from melting if you're sitting on the brake too long!  Of course, my kit didn't come with these special thicker seals so I had to improvise.  Fortunately, I had accidentally bought two sets of lens seals so I just doubled them up in the housing.  Then the lens was screwed into position, followed by the big thick rubber seal that's laid down on top of the lens.  This process was repeated for the other side with some slight improvements in the construction of the harness for the other side that were learned during the construction of the first one.  Oh, and now the tail lights have a Right and Left designation.  The wiring harnesses are color coded differently for each side as well so I drew a small "R" on the bottom of the right housing and a "L" on the bottom of the left housing so  I didn't accidentally mix them up.

Finally, the tail lights were mounted back onto the tail panel with brand new Scott Drake bezels which come with new studs but unfortunately not new nuts so I had to blast and paint the originals for reuse.  I haven't mounted the tail light control boxes yet.  I'm going to keep them safely in their box until the wiring for the car is complete and the tail lights are ready to be lit so they don't get damaged.

I then cleaned up my deck lid latch and MUSTANG letters and mounted them into place.  I snapped the picture below and then my camera died.   Not shown is the rear trim that I have also installed across the back of the deck lid. 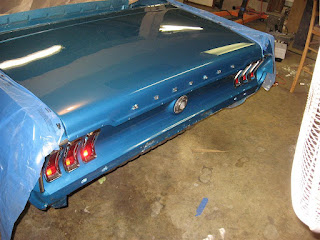 I've got a new camera on order for my wife so I'll be taking her old one to use in the shop for blogging.
Posted by A. Olshove at 5:00 PM