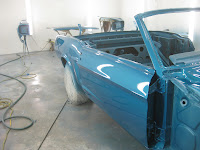 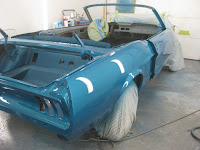 2/15/2012:
I haven't done any updates for a couple of months.  This is mostly because after I finished the carb, there wasn't much else to report.  Well, now my buddy Steve, the poor chap who I managed to rope into doing the paint, has made some progress on the paint/body and I went to his shop and helped do some of the more menial tasks such as scuffing the new hood, trunk area, fender extensions, etc.  Oh yeah!  I forgot to mention that I bought a new Ford tooling hood on Steve's advice.  He felt that there is a low spot in the middle of the hood and attempting to keep applying filler would result in problems down the road plus would generally be noticeably crappy looking.  Buying a new hood solves several issues and saves a little on labor costs.  I could have saved some pretty good cash by buying a Dynacorn hood instead but decided to that a Ford Tooling hood would be less risky fit-wise although I have nothing against Dynacorn at this point.

Rather than post a wordy description of everything here, I'll just move on to the captioned pictures.

While Ol' Rusty was away at Steve's and after the carb was done, I cleaned up some more engine parts like the old dizzy and put them on the engine.


I was going to just replace the major gaskets and seals and then decided that as long as I had it this far, I just as well rebuild it.  I had peaked inside the reverse servo housing and found that the reverse servo seal was hardened and that there was black crud in there.  I have ordered a master rebuild kit from a place called Oregon Performance Transmission for a reasonable price along with a new reverse servo piston.  So, I think you can guess what the next posting will be about.
Posted by A. Olshove at 10:11 PM