There are a couple of trim studs that need to be removed along with some J-Nuts and soon, I was rewarded with a pile of rusty crap and a pot metal housing.


This is why I've been putting this job off for so long.  There are a lot of little nooks and crannies that need to be cleaned out.  Well, sometimes lazy trumps cheap for me so I gathered the fender extensions along with the quarter extensions and a few other odds and ends to take to my favorite media blaster, Tony, to be cleaned up.  I gave him a call to set an appointment and during that fateful call, my world was torn asunder.  For you see, my media blaster... Tony... sold his business.   I know, right?  I'm choking up a little right now just thinking about it.  I'm here to tell you, don't ever take your media blaster for granted.  If you find one worth holding on to, respect him and cherish him today because he may retire tomorrow.  Let's have a moment of silence.

Okay, so why not just go to the new guy?  Well, he was still learning the ropes and not ready to open doors yet so now what?  Well, I just had to suck it up and strip that paint by hand that's what.  I spread paint remover all over it and waited.


Like the hood, the paint stripper got through the newer paint and primer but all it did for the original lacquer paint underneath was soften it.  At this point, it starts taking multiple applications of the paint stripper at which point I gave up in favor of one of those composite paint stripping wheels.

That composite stripping wheel makes fast work of the paint but you have to be careful, it will also chew through the pot metal if you're not careful.

And so it went that I stripped the remaining parts in this manner.  First taking off as much paint as possible with chemical stripper and then finishing up with the disk.

I thought they were ready for primer until I looked closely at the driver side extension and noticed a crack at the valance mounting point.  It's always something isn't it?


Well, I couldn't just leave it, it had to be repaired so I did some online research and found that there's a pot metal repair system from Muggy Weld. Looks awesome doesn't it? Well, it's also $50 for the minimal kit and that just wouldn't do, for me anyway. I could buy a new fender extension I guess but that's $120. So after more research, I found some references to headlight bucket repair kits and some suggestions by people on the VMF that indicated that JB Weld sticks to pot metal and was the method of choice for repairing fender extensions.  So, I made a couple of sheet metal reinforcements and roughed them up on one side and roughed up the repair area:

I then mixed up some JB Weld, spread it liberally on the contact surfaces and clamped them into place over night:


The next morning, the reinforcements were secured in place.  Prior to the fix, the fender extension could be flexed with little effort around the area of the crack.  Now it can't be flexed at all and seems to be good to go.


I also used the JB Weld to fill the crack and sanded it smooth:

Finally, I could apply the primer!  I cleaned up all of the parts with wax and grease remover, hung them up to be painted and... was out of primer.  *sigh*  Fast forward to the next day and I had picked up a fresh quart of DP40LF and catalyst.  No matter how often I go buy this stuff I never fail to suffer sticker shock.  I'm getting better at keeping my hair from popping off my head and my eyes from bugging out when the guy at the register tells me what to pay though.

While I was at the paint shop getting the DP, I picked up some handy-dandy mixing cups.   DP40LF mixes 2:1 with it's catalyst (DP402LF) and it's pretty easy to just figure out in my head how much of each needs to be mixed but these mixing cups, although they look complicated with all of the little lines and numbers, are pretty simple to use once you figure out what they're trying to tell you.

The cup has various columns indicated with the headers 1:1, 2:1, 3:1, etc so you use the column that pertains to your primer, 2:1 in this case.  Just choose a number that pertains to how much you want to make.  The numbers are unit measurements and don't necessarily pertain to ounces or such so just pick a number and fill the cup with your DP under the 2 heading (I used the number 5).

Then pour the catalyst to the same number under the 1 heading and BAM! You have a properly mixed ratio.

I hung the various parts that I had prepared from the garage door for some quality time with the HVLP gun.

I like to batch my painting because I really hate cleaning my guns.  My grill, hood latch striker bracket, and stone guard brackets were going to be painted with the same PPG paint I had painted my engine compartment with so they each needed a couple coats of DP40LF in preparation. 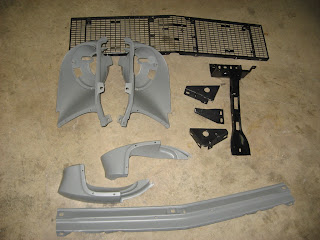 After the primer cured, I sprayed the grill, hood latch striker bracket, and stone guard brackets with black PPG DBC paint and now I can finally mount the front fender extensions to the fenders for further hood alignment.
Posted by A. Olshove at 8:14 PM