A few days after the car was returned from the media blaster, I set out to apply primer to the newly exposed body panels to prevent flash rust during the winter. This can probably be left for a couple weeks in a dry garage but I needed to get it done while the weather was still warm. First, however, I had to clean out the gift left by the media blaster. Even though I took precautions, the media made its way into every nook and cranny that I had missed. It's like every little particle is programmed to find it's way out of the light.

Before I could even do that much, however, I spent some time grinding the original seam sealer out of the panel seams with a knotted wire brush on my 4.5" angle grinder. I did this before cleaning the media out because grinding away seam sealer is a pretty messy task in itself. Little tacky globs of sealer stick to whatever surface they happen to land upon and needed to be wiped off and cleaned up with the media.

I pushed my 5 HP shop vac to its fullest potential utilizing both orifices. By which I mean, suck and blow, of course. Blow was very handy with the reduced nozzle to coax the light weight walnut shell and sealer dust up and out of their various hiding places. I had to work backward and forward several times to remove the majority of the media but finally, I got it out... mostly.

The next task was to wipe down every freshly exposed surface with lacquer thinner in preparation for the primer.

Finally, I was ready to load my Harbor Freight 20oz Spray Gun with PPG DP40LF gray epoxy primer and shoot every square inch that I could see.

I decided to go with gray instead of red for the exterior panels because in my mind gray is a more neutral color that would be more "compatible" with blue if the paint got scratched. I don't know for sure if it really matters though. Probably not. I'll probably respray the interior with DP74LF red oxide though.

Here's an overall view of the new primer: 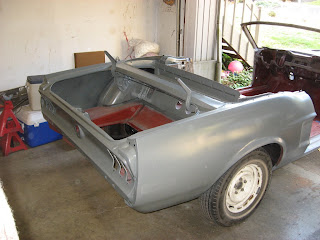 And a view from the inside up below the deck lid filler panel. I couldn't get a good spray up against bottom of the panel because I found more media hiding in there which kept blowing out into my eyes and sticking to my new primer. 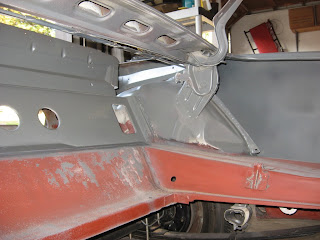 Here's a close-up of the media stuck to hinge bracket... grrrrrr... 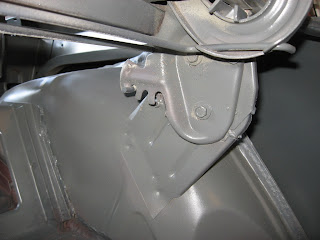 Shots down into the drain channel. 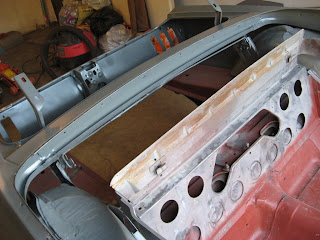 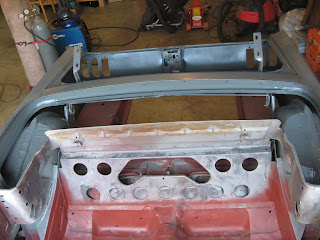 Down into the top of the wheel well. Oops... I probably should have scraped that bit of original sealer off first. 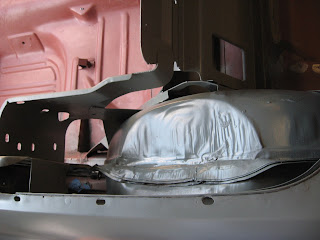 And from the back. I actually had made a couple of repairs to the rear panel first. There was a slot that I'd accidentally cut through the bottom right of the panel when I cut out the bumper reinforcement brace that I had to weld and grind as well as two rivet holes where I think the original dealer had riveted a logo. Now it's ready for seam sealer. 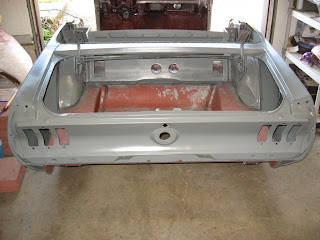