Cleaning up the Front Clip

Wow, over two weeks since my last entry. I'd like to say I was out enjoying the sunny days of Spring but A) It rained much of the time, and B) I spent the whole time grinding away on the front aprons, firewall, and radiator support.

Now, I expect you to suffer along with me and read every frame of this long, tedious blog entry because misery loves company, right? If you've ever had the misfortune of cleaning up a front clip by hand, you're probably rolled up in a ball under your desk screaming, "No more! No more! Please just kill meeeeeeeee!"

A competent veteran restorer would have just had the car completely media blasted and been done with it but I'm none of those, so I hefted my angry grinder... err angle grinder up, armed it with a Harbor Freight 4 1/2" Knotted Wire Wheel and went to work.

This is what we start with. In this case, it's the outside of the driver side rear apron, coated with rust and brittle black sound deadener. First I opted to just dig the wire wheel right into it. It does work but the mess is extreme. I was coated head to toe with black dust and looked like a coal miner. 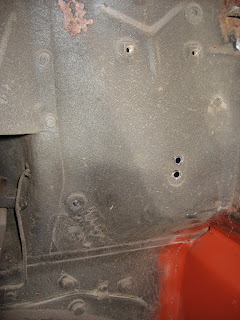 I then decided to brush paint thinner over the surface first and use a rigid putty knife to scrape the sound deadener away first. This worked too minus the black lung. 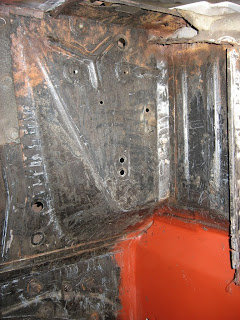 After I could see bare metal, I then went to work with the wire wheel. It did a pretty good job of knocking off the old paint if I was slow and methodical about it. After about 1 hr of combined scraping and grinding, I pulled back my respirator and sighed contentedly while admiring the shiny metal... until I looked to the left and saw the other two acres of pain. It was then I knew what I'd be doing for another 4 or 5 nights. 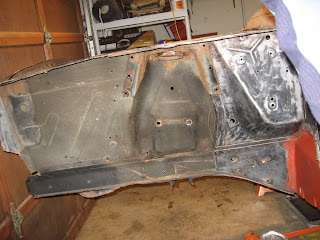 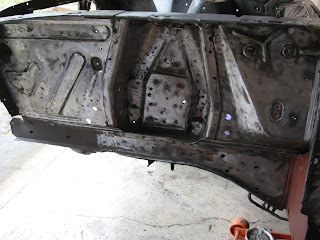 The same routine was followed for the outer passenger side. 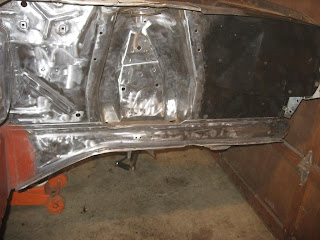 Then I had to do it all over again on the inside but with a twist. Look at all those #($&@* nooks and crannies. 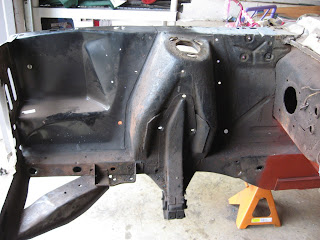 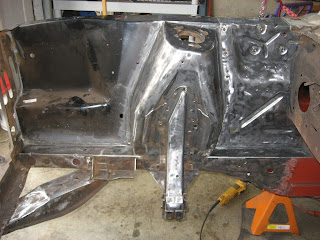 And repeated on the inside driver side aprons. 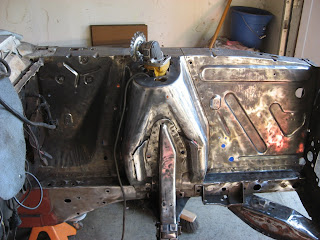 I moved onto the front radiator support... the support with lots of holes and edges. Do you know what happens when the wire wheel spinning at 12K RPM does when it catches the edge of a hole or flange? It becomes POSSESSED by the screaming demons of Hades and takes off on it's own, that's what! You either drop it, catch it, or lose an appendage. I only dropped it in my lap once.. OW!

Having survived the past several nights of noise and mayhem, losing the feeling in my fingers from the constantly vibrating grinder, I finally made it to the grand finale.

Ah Mr. Firewall. We meet again, at last. The circle is now complete. First things first though. I had to remove the wiring harnesses. This involved crawling up under the dash, taking reference photos, and marking wires. The harnesses could then be snaked through their respective holes in the firewall. 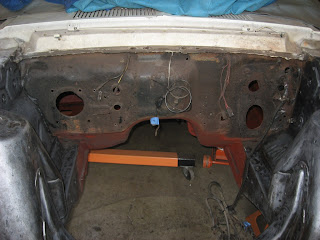 Same routine only this time there were some serious globs of seam sealer that needed to be removed as well. I accidentally knocked out that eliptical punch-out next to the heater blower hole. What's that for anyway? A/C? 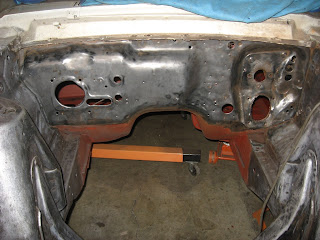 After having molested every square inch of the front clip top, bottom, inside, and out, I sprayed it down with a coat of Ospho to protect/etch the metal and convert any surface rust remaining. 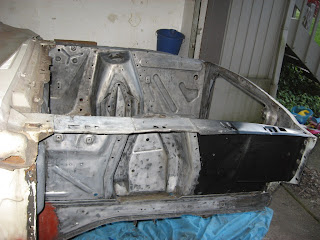 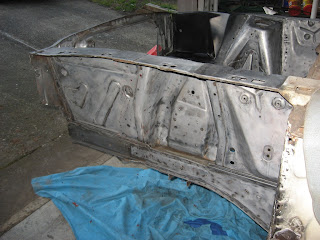 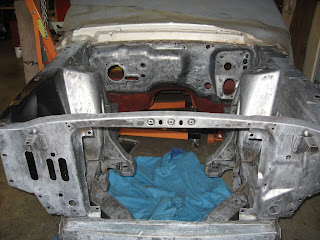 A lot actually happened between the above photo and the below photo. Primarily, the surfaces were scuffed with scotch pads, cleaned with degreaser, and then rubbed down with lacquer thinner. Additionally, the openings on the firewall were masked from the inside.

Finally, every surface, including the bottoms of the frame rails and insides of the motor mount rails and strut brackets was sprayed with DP74LF. My original plan was going to involve painting it with ZeroRust but I was more obsessive than I thought I'd be about getting down to bar metal so I decided to just do it entirely in epoxy primer. 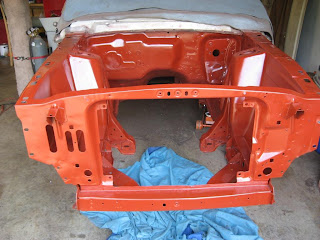 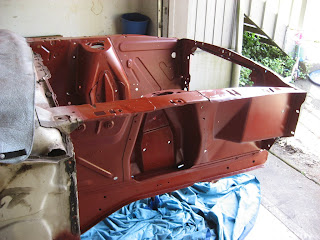 I went back through the Weld and Sealant manual and interpreted what I saw to mean that I should seal the vertical overlaps between the shock tower and aprons, along the top of the frame rail, and around the inside bottom of the shock tower. Since the battery apron was new, I did it but there was still visible sealer in the other seams so I left them be. Perhaps I should have just done them all over for consistency. I might still before paint. 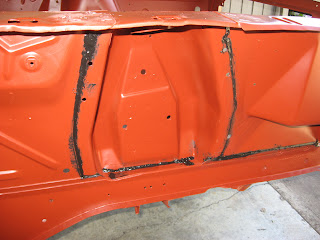 Same on the driver side: 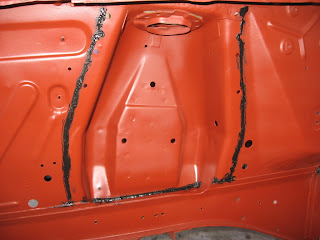 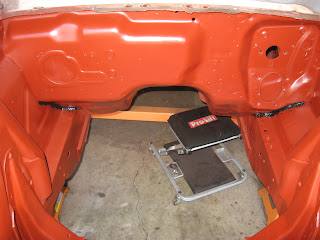