We worked so hard on all this pretty new sheet metal that it would be a shame if water were to get in between the seams and rust it all out again. Fortunately, there's something we can do to prevent that from happening. Seam sealer is to cars as caulk is to kitchens. Same concept, different application. Ford had originally sealed the appropriate seams at the factory in 1968. Unfortunately, they used a sealer that tended to flake away from the seams. Case in point, this image of this car *URP!* (excuse me, this image always makes me a little ill) a little over a year ago. Note the tarry substance over the seams. It's actually pretty brittle stuff that pops off of the seams very easily. The problem is that when it pops off, the seam is free and clear to rust away because Ford applied the sealer before paint or primer so what you're left with is shiny bare metal. 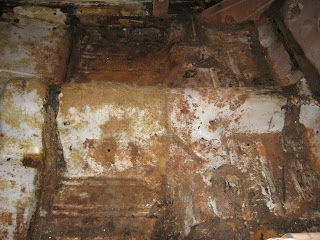 Nowadays, we do things a little differently. We apply a good coat of primer before the sealer is applied and todays sealers need a lot of coaxing to remove them from the car. Here I started by applying a bead of NAPA brand black firm sealer to the seam between the right hand toe board and the front of the floor. 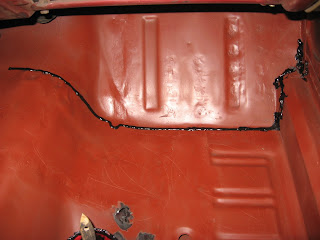 Then I follow up with a cheap paint brush that I cut down to about 3/4" long and dipped in lacquer thinner. This allows you to brush the sealer into the seam and the sealer won't stick to the brush. 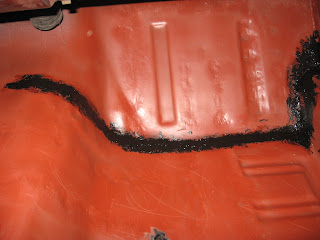 The Weld & Sealant manual calls for sealer along pretty much any seam that might allow the elements into the passenger compartment. This seems to be Ford's entire goal rather than actually protecting the seams themselves. Many seams were left unsealed at the factory. Seams that were sealed from top include the afformentioned toe board to kick panel/floor seam, all around the perimeter of the seat platform. 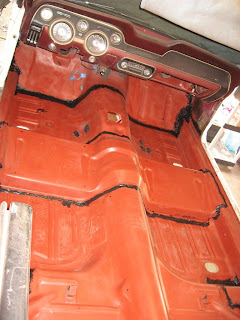 All around the rear torque boxes, and along the rear floor to the rear hump transition seam. 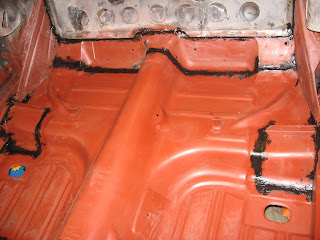 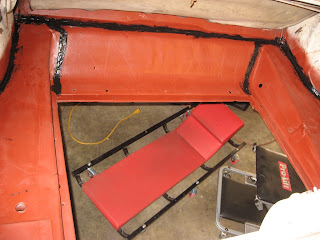 And around the the back end of each trunk floor panel and around the perimeter of bumper reinforcement brackets. (oh jeez... please excuse the mess, it looks like somebody threw up in this one. 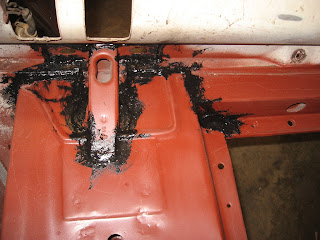 Since I wanted to have a concourse look but a more complete seam sealing experience, I had sealed several seams that were not necessarily concourse, and coupled with the fact that the floor top and bottom were a bit chipped and scuffed from general car work, I opted for another fresh coat of DP74LF over everything including the newly applied sealer. I then plan to come back over just the concourse seams with black brushable seam sealer for a more factory look.

So, I went over the entire floor top and bottom, front to back, with a scuff pad and lacquer thinner to prepare for a new coat of primer. I then broke out my spray gun and a fresh batch of primer and lightly resprayed the whole kit-n-kaboodle for a more uniformly-colored finish since this project was reduced to a patchwork of DP74LF, ZeroRust, bare metal, and gray primer. I actually sprayed more lightly over the existing concourse seams just in case it was more concourse to be lightly primered because the sealer was applied before primer right? So it follows that the sealer from the factory would not be clean and fresh. I'm not sure why I bother though since this isn't going to be a show car... who knows? 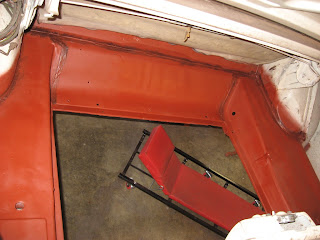 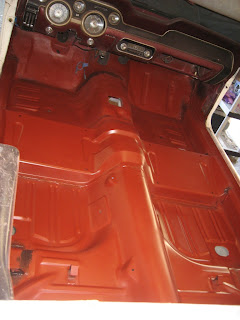 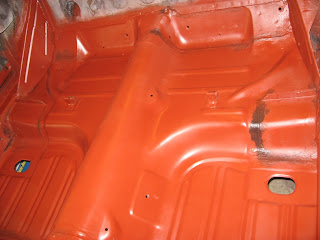 I also sealed most every seam on the bottom prior to reprimering the floor. The factory seams included the side floor to inner rocker seams, and the top of the front toruqe boxes. 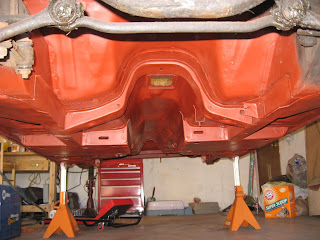 The rear bottom of the car was sealed around the rear torque boxs, around each of the four seat belt anchors, around the trunk floor to wheel well seam, and around the outside seam where the outer wheelhouse mates with the rear quarter opening. 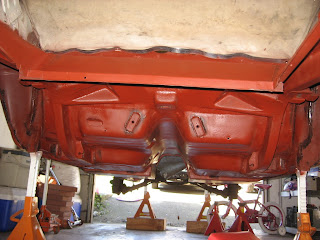 Speaking of which, here's a look into the rear passenger wheel house after sealer. 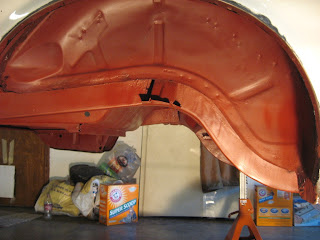 ... And then again after applying two coats of 3M rubberized undercoating. Applied to both sides. Stop laughing, the overspray on the frame rail is supposed to be there from what I've read on the concourse forum of the VMF. 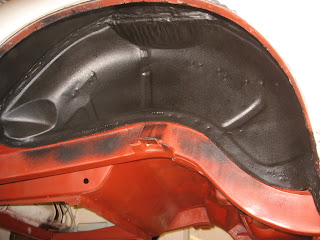