I ordered the full floor from NPD on Thursday November 6th, On Wednesday the 11th, a tractor trailer pulled up to my house and unloaded a very large, 160 lb box. Even though the NPD sales rep quoted the 14th as the delivery date, my order arrived 3 days early from California via truck freight! Way to go NPD and Conway Trucking!

Now, receipt of a huge box is not all sunshine and kittens, it also involves unpacking and disposing of A LOT of packing materials. Here's the new floor next to the material it was packed in. Granted, the material was necessary to get the floor to me in good condition. 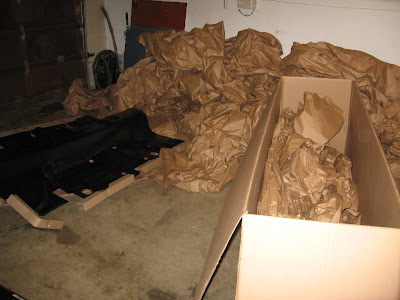 Along with the floor I ordered a new seat platform. 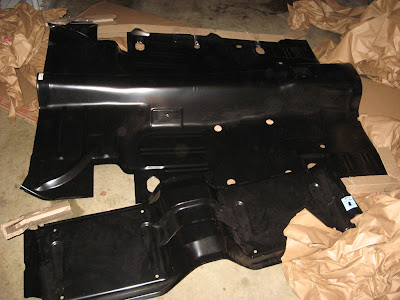 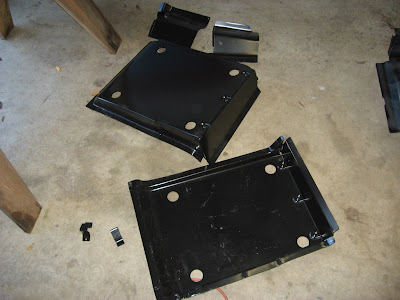 Disposal of the packing material consisted of a couple of hours of rolling up the miles of packing paper and cutting up the boxes into manageable chunks. This stuff is ready to be kicked to the curb. 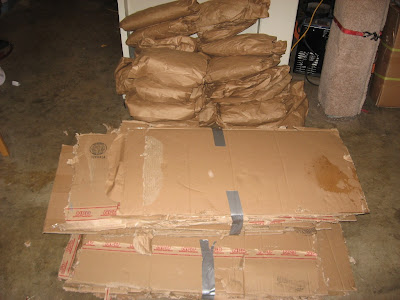 I wanted my new floor to be red oxide rather than black EDP (Electric Discharge Plating) like the original cars were so after a discussion on the VMF, I opted to scuff the EDP with my drill and an abrasive wheel brush. 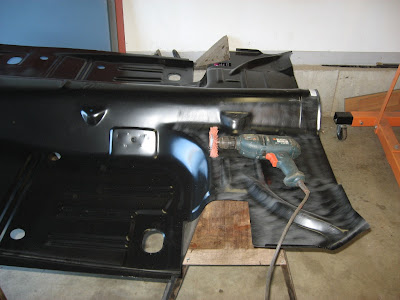 I scuffed all of the EDP parts on both sides and then wiped down all the surfaces with wax & grease remover. 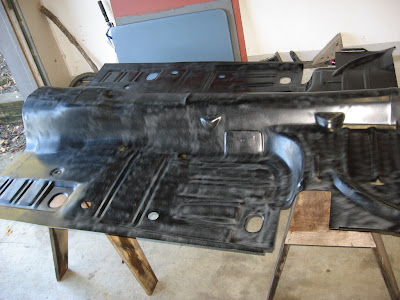 Prior to applying primer, I welded the rear seat brackets to the rear floor. I was going to weld the new emergency brake brackets at this time but decided to weld them when I'm able to fit the emergency brake cables on the car to ensure that they are welded in the correct location. 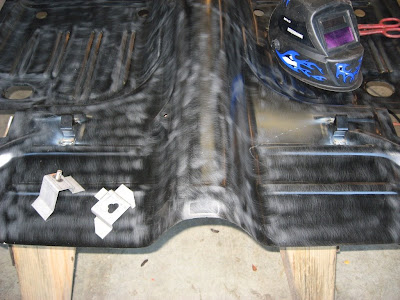 I found yet another use for my handy-dandy engine hoist (in addition to a tree puller), to hold up the floor while I paint it. The other floor parts are laid out on a pair of sawhorses. I mixed up 18 ounces of PPG DP74LF epoxy primer, adjusted my Harbor Freight HVLP gun, and shot the primer. 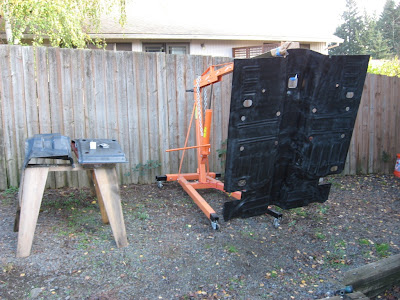 After finishing the first side of all the parts, I waited for the primer to cure, turned everything over and shot the other side. I pretty much just shot one coat. After the car is together, I might shoot another coat over the entire bottom with some clear for protection but haven't decided. Some guys wait until the car is together to shoot the red oxide but I decided it's easier to do it with the panel hanging up than on my back after it's been installed. I'll probably wind up accidentally scratching the heck out of it and having to paint it while it's on the car anyway but experience will tell. 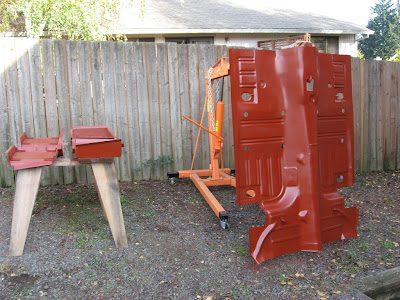 After going over the light spots on the floor a couple of times, I still had enough primer left over to coat the parts already installed on the floor. Prior to this, however, I had to grind off surface rust and treat the existing metal with Ospho. Here's what the front floor area looked like before primer. 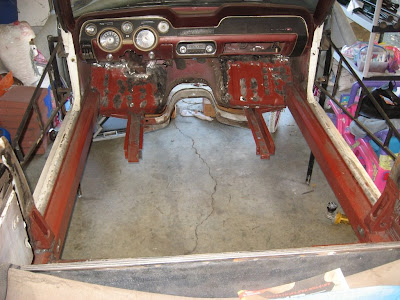 And here's the front after primer. It's important to treat this area before welding in the floor because you don't want bare metal in the seams between the toe boards and the new floor since the floor will be the one part installed with and overlapping joint where moisture can collect. Additionally, I treated the tunnel support member with Ospho and ZeroRust instead of PPG since it's old metal and very difficult to remove existing rust properly. 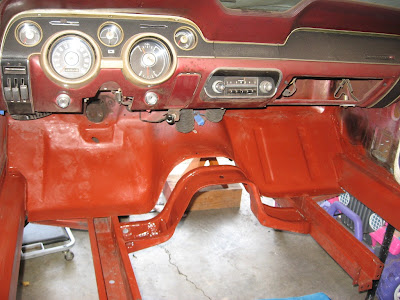 I next had to clean up the back of the car where the floor will overlap the existing rear transition panel. Again, I used a stainless steel wire brush on my angle grinder and Ospho to treat the existing surface rust. 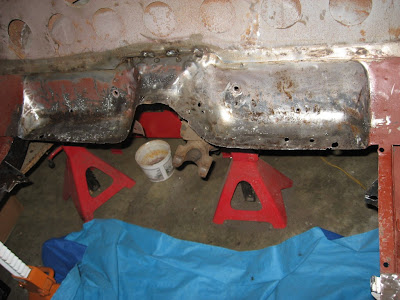 Finally, a coat of PPG primer for the panel. Since the floor was out of the way, I performed the same grinding + Ospho routine on the the inner side of the frame rail but followed up with ZeroRust instead of Epoxy Primer. 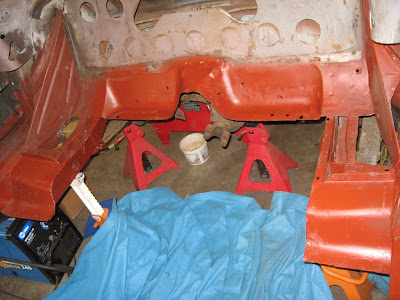 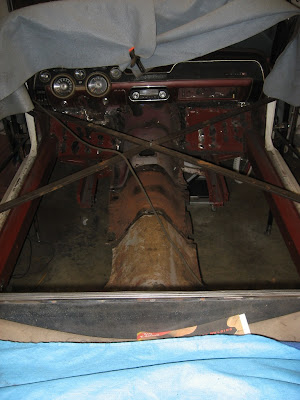 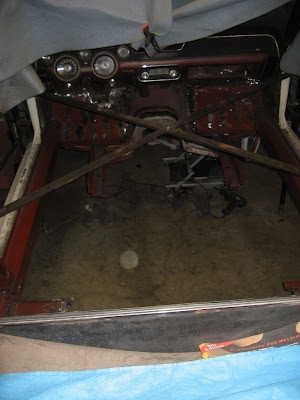 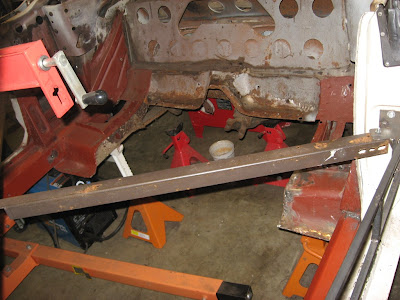 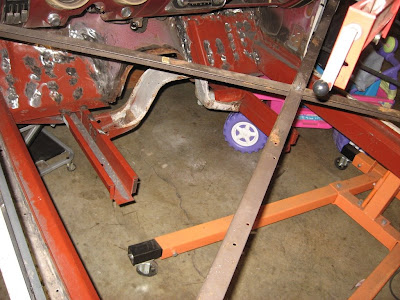 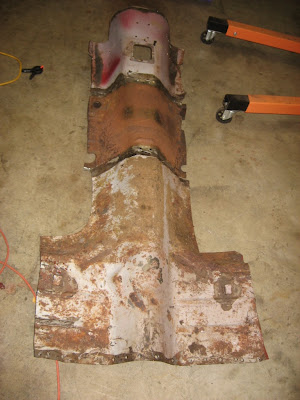 So, now I have a car with a great big hole in the middle of it. Whatever shall I fill it with? 2x4's? Old warehouse pallets? Crumpled up copies of The Oregonian? No, I think I'll buy a full Dynacorn floor pan from NPD. In fact, I already have but it won't be here until around the 14th but in the meantime, I've got some cleaning up and minor patching to do on the mounting points between the floor panel, the firewall, and the rear seat transition.
Posted by A. Olshove at 8:06 PM 0 comments 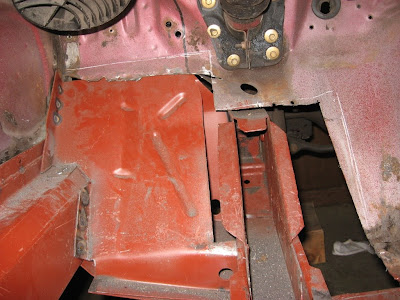 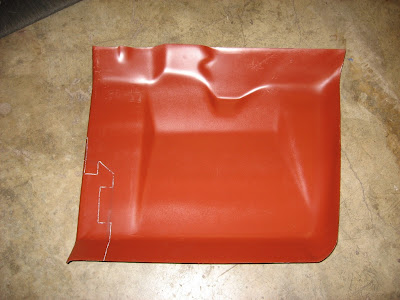 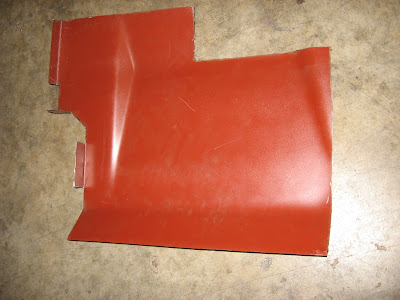 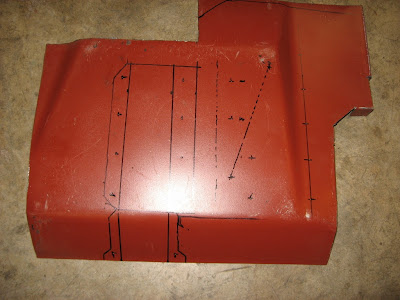 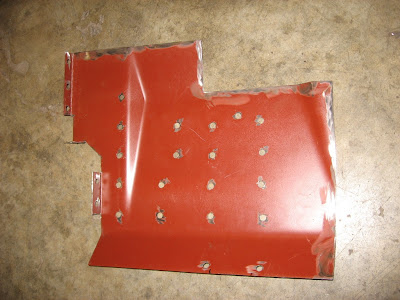 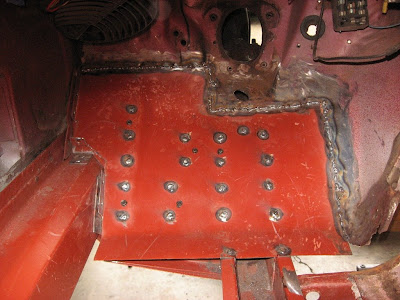 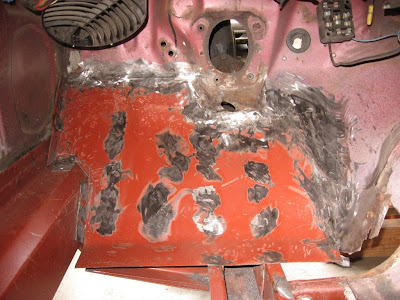